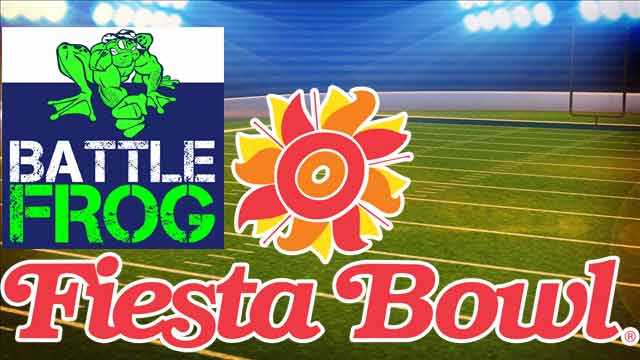 The Fiesta Bowl took on a unique name and returned to an old-school look all at the same time for the 2016 version of its annual game. It was known as the BattleFrog Fiesta Bowl, in a deal that was seemingly brokered mainly by television partner ESPN.

However, the deal is no more and the partnership lasted just one game.

It was fun while it lasted: BattleFrog Fiesta Bowl is no more. Fiesta Bowl currently w/out naming rights sponsor

Despite the one-game sponsorship deal, it was a fun ride while it lasted. From the jokes about the name to the serious questions of “what the hell is a BattleFrog,” at least people were talking about the sponsor.

The answer to the question of what is a BattleFrog? It’s simply an Obstacle Racing Series designed by NavySEALS and other military personnel.

Except the deal was done in so much haste that BattleFrog didn’t even get its name on the tickets for the game or the patches that the players from Ohio State and Notre Dame wore on their uniforms.

Battlefrog sponsorship for Fiesta Bowl was last minute deal, don't have logo on tickets or on bowl patches.

Just how much fun was the name that lasted just one year? Many believed it as one of the best names in the crazy world of Bowl Game names.

As for the Fiesta Bowl, you can bet it has a plan in place for a long-term sponsorship deal ala the one it had with Tostitos for what seemed like forever and a day.