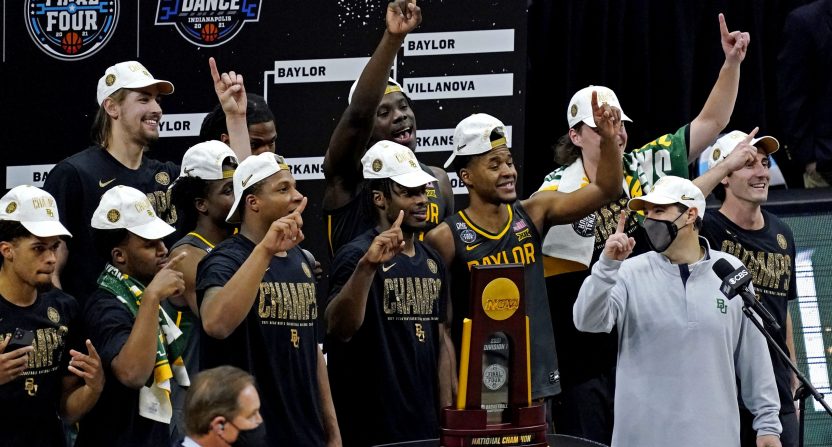 The Baylor Bears sure saved their best for last and that resulted in a national championship. The 27-2 Bears completely dominated the 31-0 Gonzaga Bulldogs all game, winning 86-70 and depriving Gonzaga of being the first team since Indiana in 1976 to go undefeated.

Baylor came out swinging from the start and wouldn’t let up. In the blink of an eye, Baylor was already up 9-0 to start the game. The Bulldogs didn’t get their first field goal until 4:35 into the game but by that point, they were already looking at an 11-1 deficit.

Things would go from bad to worse as Gonzaga struggled to get into gear. After the first ten minutes, Baylor was up 29-10 and when Gonzaga finally got on track, Baylor kept a healthy margin. Gonzaga tried to cut the deficit but the best they could do was get it to within nine. But just soon after that, Baylor went on a run and Adam Flagler’s three point shot with 12:52 to go felt like a dagger in the hearts of the Bulldogs.

Baylor getting it done at BOTH ends 💥 #NationalChampionship @BaylorMBB pic.twitter.com/nWqhfCALZS

The Bears were flawless in all three aspects of the game and one complemented the other tremendously. Even if Gonzaga was at their best, it would’ve been very difficult to beat Baylor on this night. Up until the end when the game was largely over, Baylor was shooting at over 50 percent from three. And it wasn’t like Baylor was selective in their long-range shots, they were 10 for 18 from three at one point. Compared to Gonzaga going 5 for 17, that alone has to be demoralizing for an opposing team. In addition, Baylor was 16 for 18 in free throws and amassed 16 offensive rebounds. Gonzaga may have shot over 50 percent from the field but when a team can dominate from three, dominate from the free throw line, and get so many offensive rebounds that you’re getting second chances throughout the game, it’s easy to see how Baylor won by 16.

To Gonzaga’s credit, they weren’t necessarily terrible. They played a respectable game and really, if they had played like this most nights, they probably would’ve won. It’s just that Baylor came across a much better team on the night when it ultimately counted. No one choked, Baylor and Gonzaga were far and away the two best teams of the season and they both showed why they deserved to be there. One was just flat out better than the other.

For Baylor, this is their first men’s basketball national championship and it came in their first tournament final since 1948. Even though Baylor was 27-2, they had COVID related cancellations in their schedule from December and February. The December hiatus prevented them from playing Gonzaga during the season while the February one contributed to their first loss against Kansas. Despite losing in the Big 12 Tournament, Baylor had a case to be the best team in the country and for those who doubted them, Baylor proved those doubters wrong as the Bears became national champions.