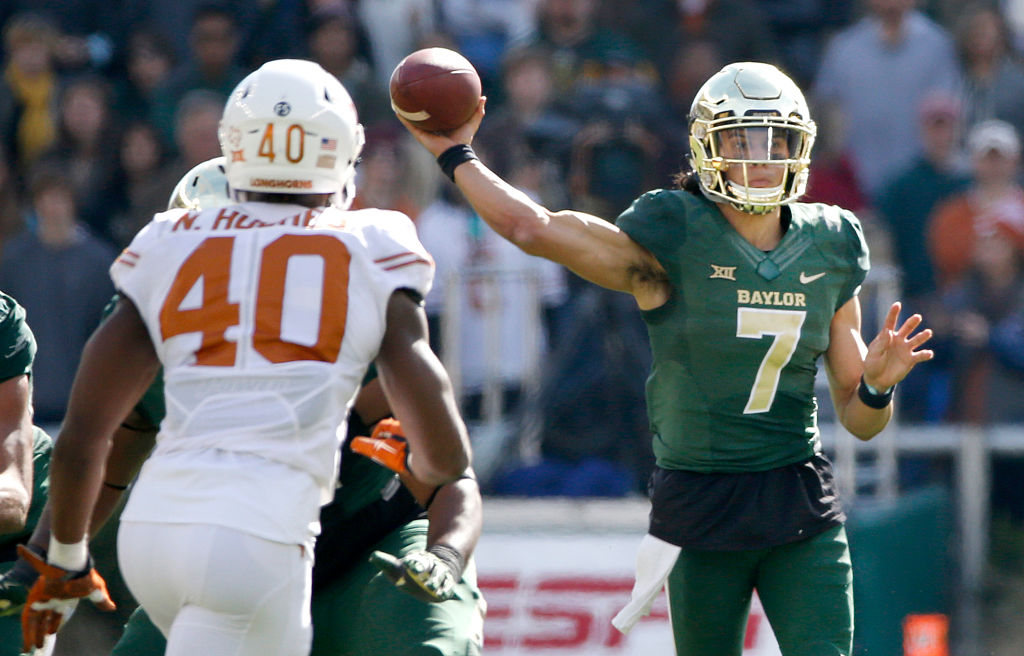 No. 12 Baylor entered Saturday’s game against 4-7 Texas starting third-string quarterback Chris Johnson. So when Johnson took a hard hit late in the second quarter and was forced to exit with an injury, the Bears were down to… wide receiver Lynx Hawthorne, who, according to ESPN, last played quarterback his junior year of high school.

Naturally, Baylor’s offense was heavily ground-based Saturday, with nine ball carriers racking up 395 total rushing yards. Art Briles got creative as he searched for ways to minimize his quarterback’s impact on the game, finding some success with direct snaps to running backs. Even 410-pound LaQuan McGowan got a shot.

The Bears’ final drive, which started on their own four-yard line with 1:20 to play, was a sight to behold. After an eight-yard gain on a screen pass and a 30-yard Hawthorne scramble, it looked like Baylor might be on its way to a miracle, but an intentional grounding call on the next play essentially quashed that dream. At one point, Baylor attempted a double pass, in which Hawthorne threw a behind-the-line screen to a receiver, then ran down field, but the Longhorns snuffed it out. After Hawthorne floated a Hail Mary well short of the end zone on third down with five seconds to play, the Bears called on starting running back Johnny Jefferson to heave one on the game’s final play. It was picked off.

Baylor found itself in this surreal situation because of injuries to star quarterback Seth Russell on Oct. 24 and backup Jarrett Stidham on Nov. 21.

Meanwhile. it’s unclear if Texas should be excited to have beaten a highly ranked opponent or embarrassed to have barely sneaked by a team on its fourth quarterback.

Been saying for years Texas could beat Baylor if Baylor used a wide receiver at quarterback.

In a way, Baylor fans are probably happy their team lost to TCU last week, because if the Bears had won that game and lost this week, they would have had to live with the fact that a fourth-string quarterback cost them a shot at the College Football Playoff.