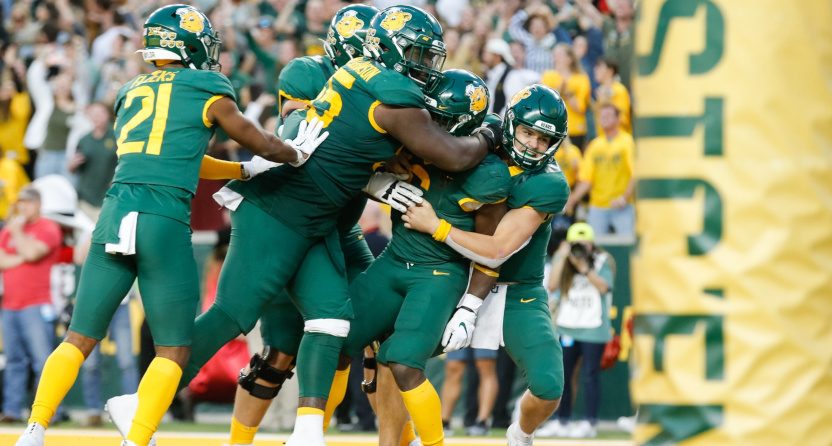 The No. 22 Baylor Bears came out with a 33-30 home win over the Texas Tech Red Raiders Saturday, but they barely made it there. Baylor fell behind 20-17 with 1:37 left in regulation thanks to a 30-yard touchdown run by SaRodorick Thompson, but the Bears pulled off quite the drive after that. They were backed up to the 1 at one point after a sack on quarterback Charlie Brewer, but Brewer then led a drive that took them down to the Red Raiders’ five-yard line. That included five completions for 74 yards, counting this great sideline grab from Denzel Mims:

WHAT. A. CATCH. 😱@BUFootball's Denzel Mims with a catch of the year candidate! pic.twitter.com/lI3nXqDZ2e

Following that, Brewer twice targeted Mims in the end zone, but Mims dropped one pass and the second drew a defensive holding call. That set Baylor up at the two, but it resulted in only a tying 19-yard field goal from John Mayers. But that sent the game to overtime.

Both teams scored touchdowns in the first overtime period, but that was controversial thanks to an illegal snap call that nullified a Texas Tech fumble recovery. Baylor scored after that to force a second overtime, and there, they held Texas Tech to a field goal and then scored on a five-yard run by JaMycal Hasty. That proved enough for the Bears to escape and move to 6-0 on the year, and they’re now even with Oklahoma at 3-0 in the Big 12.