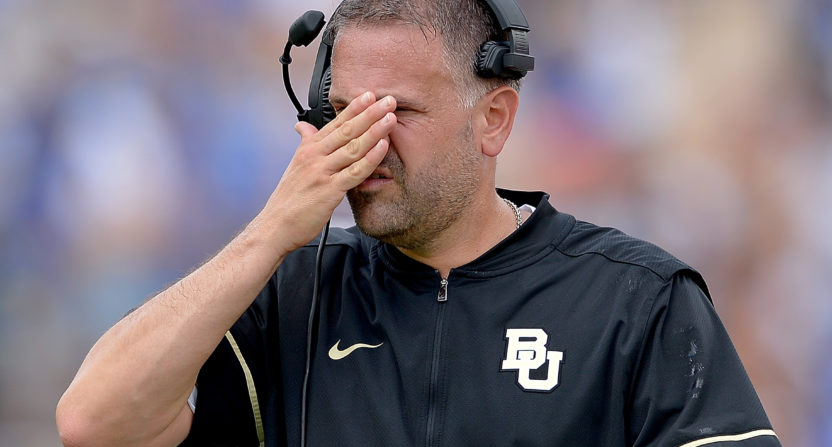 If all you knew were high-level numbers and transactional details, it’d be pretty easy to look at the state of the Baylor football program and see their current predicament as a tragedy.

Here is one of college football’s perennial doormats, having spent well over a decade at the bottom of their conference. For a brief moment in time, they get a taste of what it’s like to be among the best teams in the nation, playing in New Year’s Day bowl games and entering seasons as a national title contender. And then, just as soon as they settle into their newfound status, it’s stripped away and they return to the Stygian underworld they often shared with the likes of Rutgers and Kansas.

But you can’t look at the state of the Baylor football program from high above. You have to get down in the muck to understand what was happening while Art Briles was building the Bears into a national powerhouse. You have to see just how much this religious university was willing to lose its morals in order to field a better football team. You have to know how many victims were left in the wake of an unconscionable string of decisions.

And once you do that, the idea of Baylor potentially going 0-12 this season feels like a karmic rebalancing.

I really hope Baylor goes 0-12 for the rest of time.

First and foremost, we need to recognize that whatever happens on a football field does not fix anything that happened at Baylor University in the 2010s. Numbers vary, but it’s alleged that over 50 rapes or sexual assaults were carried out by over 30 Baylor football players between 2011 and 2014 alone, to say nothing of those assaulted and intimidated who were too scared to come forward or felt that the university put the needs of their attackers ahead of theirs. In regard to justice for them, there is nothing that could happen on a College Football Saturday that will make any of that right.

The road to retribution, or some form of it, is long and hard and doesn’t always end with clear victories. Those battles continue in courtrooms, on campus, and in the national discussion.

However, what happened at Baylor under Art Briles’ watch, the way that university and its supporters handled the fallout is something that we can deal with in a tangible way in the interim. There’s a reason Briles is finding it impossible to get a new coaching job at the college or professional levels. His tone-deaf denials and refusal to take real responsibility hang over him like a dark cloud.

The same goes for the university itself, where former Chancellor Ken Starr and AD Ian McCaw denied there was a systematic problem before both leaving their posts (neither were outright fired, for the record). Even when confronted with all the evidence and claims, Starr and others would go on to lay blame at the feet of the alleged victims. Briles was fired, but not without pushback from big money donors and fans, some of whom organized t-shirt campaigns in support of him. When sexual assault victim and advocate Brenda Tracy spoke with the team, she says one of the coaches pulled her aside to lambaste her and the media for making up claims that weren’t true. All the while claims continued to pour in alleging sexual assault, cover-ups, and victim-blaming.

Sometime later, Baylor women’s basketball coach Kim Mulkey told team supporters that “if somebody around you and they ever say ‘I will never send my daughter to Baylor, you knock them right in the face.” She would later apologize for the comment, but that sentiment received a lot of cheers all the same.

All of which brings up to the 2017 college football season. Briles, Starr, and McCaw are all gone. Some of the players on the current team never played for Briles and most of them were uninvolved with any of the claims made. Baylor has moved on and would probably hope that the rest of us would as well.

But it doesn’t work like that. Not after what happened, how long it happened, and how poorly they reacted as an institution. Not when arrests and disturbing allegations continue to pop up every few months, reminding us the breadth of these transgressions. Ask Penn State if the desire for schadenfreude wanes so quickly? And if Baylor didn’t understand that before the season, surely they understand it now that they’re 0-3 with a very distinct possibility of going 0-12 this season.

Though tempered by the fact that Liberty University shares many of the same questionable ideals as Baylor and currently employs Ian McCaw, the Flames’ upset win over the Bears in the first week of the season was a schadenfreude delight for national fans looking for some form of retribution. The assumption was that Baylor would take a step back under Matt Rhule but this seemed like a further step back than anyone realized.

What are the odds Baylor goes 0-12 this year? I ask because this is the only thing that could ever make me believe karma exists.

That was confirmed in Week 2 when Baylor lost again, this time to UTSA. It was the first Roadrunner victory over a Power Five school in history. It was also recognition that if Baylor couldn’t win these first two games, they’re really not going to have much luck looking forward.

In Week 3 they traveled to Durham and dropped to 0-3 with a 34-20 loss to Duke. The really scary part for the Bears is that this three-game stretch was by all accounts the easy part of their schedule.

Baylor now enters conference play and must run a gauntlet that includes hosting No. 3 Oklahoma, road games against Kansas State and No. 6 Oklahoma, and home tilts versus West Virginia and Texas. Beyond that, they’ve got No. 16 TCU and Texas Tech to look forward to. Their only reprieves may come in the form of Kansas and Iowa State, however the former is a road game and the latter isn’t going to forget what Baylor did to them in previous seasons.

The odds say Baylor probably won’t go 0-12. They’re young and they’re learning a new system and chances are they’ll catch a mediocre team on a bad day and eke something out. But even if they go 1-11 or 2-10, Baylor-haters will take a lot of pleasure in watching it all happen. After years of scorching opponents under Briles, these Big 12 rivals are going to take pleasure in doing the same to the Bears. It might not be the same coaches or players, but it’s certainly the same logo and university. Football teams can’t go out there and do anything for the people affected off the field, but they can sure do something to remind Baylor of their place on the field.

Of course, if they do go 0-12, it will be an extra-special topping on their schadenfreude sundae. It would be the first time the school went winless in a season since 1969 and the most losses in a single season in school history. Given that it would be coming just two seasons removed from their last ten-win campaign, that’s an epic fall from grace.

For many folks, it didn’t come soon enough. Even if it will never be enough to make up for what happened.

2 thoughts on “Baylor’s potential 0-12 season is a schadenfreude delight, even if it doesn’t fix anything”