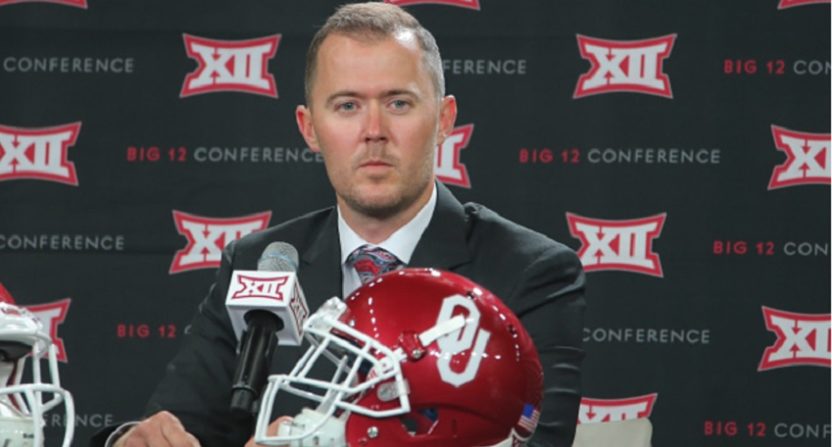 Big 12 Media Days have arrived. Thus, it’s time to address the burning question on many college football fans’ minds about the conference. Why on earth did the Big 12 add a conference title game?

Many believe the Big 12 adding this title game was stupid. It is. The Big 12 had the best, most fair format for determining a clear conference champion. A 10-team conference played a complete round-robin schedule with each team facing the other nine opponents. The conference champion either earned the best record or tied for it and beat the other team on a football field.

This method is simple, direct, and clear in theory. The Big 12 had trouble implementing it in practice. The conference initially took away the head-to-head and awarded co-champions (related: coaches get bonuses for conference championships). That move backfired in 2014 when the Big 12 punted the nearly impossible choice between TCU and Baylor to the playoff committee, who promptly chose Ohio State, dropping a TCU team that entered the weekend No. 3 down to No. 6 after a 55-3 win. But the conference resolved that problem.

So why change the rational, evenhanded way to pick a champion? It’s not stupid enough to work for a stupid College Football Playoff selection system.

College football abhors math that works. So a human committee chooses the four participants in the playoff. Humans are flawed. They have cognitive biases that can impede logical decision-making. Many of those biases work against the Big 12.

We form perceptions from memory. Memory is imperfect. We remember the high points. We are most impacted by what happens recently. A title game guarantees the chance to make a strong statement against what should be a Top 25 opponent on the final day. How did Ohio State get back into that discussion in 2014? Tonking a Top 25 Wisconsin on the final evening, while all the committee members sat together watching. The Big 12 tried to line up regular season games on the same day, which may prove crucial. It’s just not the same.

Obtaining a “13th data point” is important. It’s adding a quality win. That has been huge for other conferences. Go back again to 2014 Ohio State. The Buckeyes had one win over a ranked opponent, Michigan State, before the title game (and a bad loss against Virginia Tech). That was not a playoff CV before the title game. It was after. The title game won’t work out quite the same way for a Big 12 team. The teams will have already played. But it’s something.

The Big 12 needs the statement that a title game makes. The committee (and popular perception) do not value the Big 12’s strength: the nine-game, round robin schedule. Big 12 teams get crushed for poor out-of-conference schedules. But we ignore them playing an extra conference game. Arkansas plays TCU non-conference, thus justifying its other three non-conference games against Florida A&M, New Mexico State, and Coastal Carolina. Baylor plays a ninth conference game against TCU and gets ridiculed for scheduling Liberty, UTSA, and Duke.

Money will be what the Big 12 says this game is not about. But that’s far from the truth. The game expects to generate nearly $3 million per school in extra revenue. That’s something, for schools that had neither that revenue nor conference network revenue.

A rational world would credit the Big 12 conference champion for regular season performance over the season’s duration. College football is anything but rational. Having a title game in a one-table 10-team league is wonky. But it’s still better than what may have been the alternative: watering down the conference with two to four more mediocre teams and then adding the same title game.