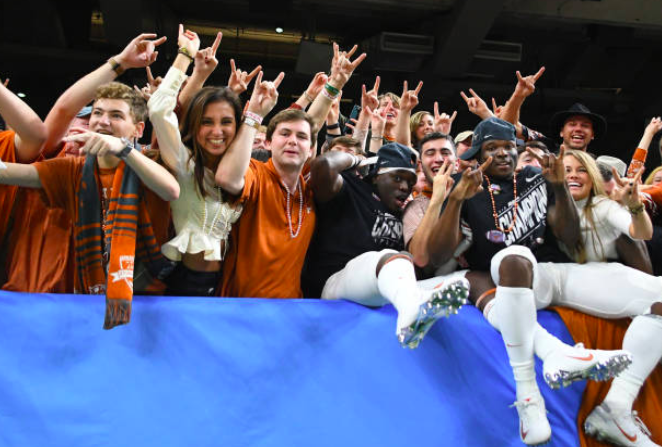 The Big 12 entered the final two days of bowl season with a 2-3 record. Baylor had won a good game, Iowa State lost a heartbreaker, and Oklahoma had an awful first quarter in the College Football Playoff. 2-3 isn’t a great record, but overall it wasn’t embarrassing. Then, on New Year’s Eve and New Year’s Day, the Big 12 pulled out two big wins. People might not point it out directly, but the wins in the Liberty and Sugar Bowls will give the entire conference a much-needed perception boost heading into 2019.

Those final two bowl games for the conference will resonate throughout the offseason. Not only is Texas “back” after dominating Georgia (don’t let the final score fool you) in the Sugar Bowl, but that feeling will carry over into 2019. The Longhorns play LSU in Week 2 next year. If Texas wins that game, expect the hype train to be full steam ahead. Not only is that great for Texas and the conference, but it means a huge boost for any Big 12 team that can beat Texas next year, no matter where the Longhorns end up.

Additionally, Oklahoma State upset Missouri in the Liberty Bowl. Not only was it one of the best games of bowl season, it was one that reminded everyone of the Big 12’s talent level. 6-6 Oklahoma State –which needed huge upsets over both Texas and West Virginia to even make it into a bowl –took it to No. 24 Missouri all game. The Cowboys showed that their upsets of Big 12 teams weren’t because the conference’s top teams were bad- it’s because Oklahoma State is just that good. There should be questions in Stillwater about why that team couldn’t play that well all year, but that’s a separate issue.

It’s impossible to understate what Matt Rhule has done at Baylor in two short years. He completely changed the culture. He completely rebuilt the program. Rhule is making Baylor into both a program that can be respected again, as well as one good at football. No one really felt bad for Baylor’s downfall these last few years- the program certainly deserved what it got, and more. But it’s great to feel good about what Rhule is doing now. Baylor went 1-11 last year. This year, a Jalen Hurd-less Bears team won a bowl game (and an entertaining one as that). People may never forgive Baylor as a program, but Rhule has turned the football team into one that you can respect without feeling guilty.

It was a heartbreaking loss for the conference, but Iowa State almost managed an upset in the Alamo Bowl. The game was filled with mistakes by both teams along with some great plays, and the No. 25 Cyclones took the No. 12 Cougars down to the wire. Matt Campbell has done an amazing job making Ames relevant in football; and with Brock Purdy as the quarterback for the foreseeable future, this Iowa State team could well be a Big 12 contender for years to come.

Oklahoma fell behind 28-0 to Alabama. The Sooners fought back well and actually pulled within two scores early in the fourth quarter, but an inability to cover Alabama’s receivers did them in. The game was somewhat entertaining, but the start was quite a poor showing. (The refs also embarrassed themselves in sadly impressive fashion, but that’s something for the ACC to worry about more.)

West Virginia also put up a poor showing in its bowl game. The Mountaineers were without several starters (who sat out to avoid injury before leaving for the NFL), but were still favored in the game. West Virginia played tough but collapsed late. Still, you expected more from the Mountaineers. On top of that, long-time head coach Dana Holgorsen decided to leave the Big 12 for the less-green pastures of Houston. That’s embarrassing for the program and the conference.

I cannot do justice to the beautiful trainwreck that was the Cheez-It Bowl in a paragraph, or two, or three. It was the football game you never thought you wanted but then realized you can’t live without. SBNation’s recap all but did it justice. But you have to watch this football game. Seriously. Watch the game on ESPN3 replay, or YouTube, or however else you want to. Then read the SBNation recap. Then realize that this was everything you’ve always been missing from your college football life. Not in a good way- but in an absolutely necessary way nonetheless.

I'm laughing so hard that I'm crying reading the SBNation recap of the Cheez-It Bowl. And I'm not even halfway through.https://t.co/COgvt27fwH