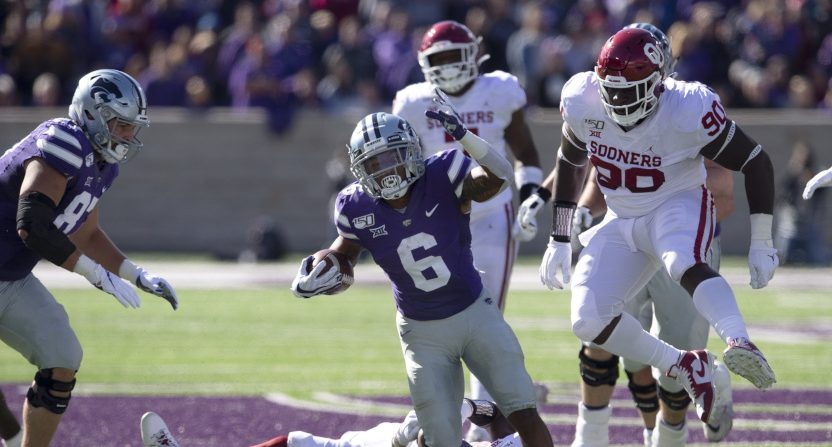 In the Oklahoma loss, Sooners’ quarterback Jalen Hurts completed 19 of 26 passing attempts for 395 yards and a touchdown (while also rushing 19 times for 96 yards and three touchdowns), but Kansas State put up numbers on the ground. James Gilbert collected 105 yards and a touchdown on 13 carries, while Jordon Brown (seen above) added 63 yards on 12 carries. Wildcats’ quarterback Skylar Thompson also had a nice day, completing 18 of 28 passes for 213 yards.

In Texas’ loss, Longhorns’ QB Sam Ehlinger completed 22 of 48 passes for 321 yards and two touchdowns and ran nine times for 43 yards, but he was also picked off four times. Keaontay Ingram rushed 16 times for 71 yards. Meanwhile, TCU QB Max Duggan completed 19 of 27 passes for 273 yards with two touchdowns and an interception, while also rushing 13 times for 72 yards and a touchdown. Sewo Olonilua added 48 rushing yards on 16 carries.

In Iowa State’s loss, Cyclones’ QB Brock Purdy completed 39 of his 62 passing attempts for 382 yards, but threw one touchdown against three interceptions. Running back Breece Hall collected 76 yards and two touchdowns on 18 carries. For Oklahoma State, Spencer Sanders completed 16 of 24 passing attempts for 249 yards with two touchdowns and an interception (while rushing eight times for 43 yards), while running back Chuba Hubbard collected 116 yards and a touchdown on 22 carries.

This makes things very interesting for the Big 12 going forward. The Sooners are likely to fall in the rankings after this loss, but they may still be the conference’s highest-ranked team. They have a bye next week and then host the Cyclones on Nov. 9. Meanwhile, the No. 14 Baylor Bears had a bye this week; they host the West Virginia Mountaineers next week, then face the Horned Frogs on Nov. 9, and then host the Sooners Nov. 16. The Longhorns have a bye next week, but then they host the Wildcats. And the Cyclones also have a bye until they face the Sooners on Nov. 9. So there’s a lot of potential for further change ahead, and changes in other conferences could also impact the rankings. But at the moment, the conference’s playoff hopes have taken a big hit here.