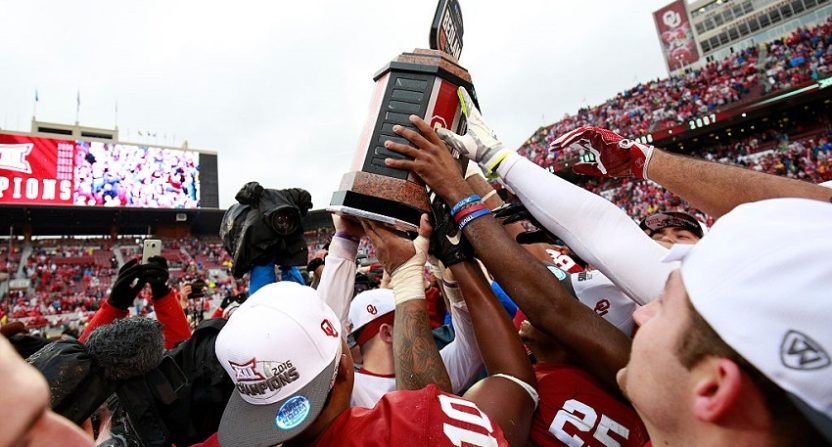 Last year, after what seemed like endless deliberations and decision-backtracking, the Big 12 decided to stay at just 10 teams. However, to try to make up for the lack of a conference championship game, the conference decided to add one, between the top two teams in the conference at the end of the year. While this might seem like a potentially beneficial fix, it fails to solve the underlying issue that has kept the conference out of the College Football Playoff in two of its three years so far.

As college football moves on, voters change, rankings systems change, and the methods of determining a national champion change. One thing, though, has stayed constant throughout these changes. The most important stat in college football, and the one that determines rankings more than any other, is the number of losses.

All else equal, teams with different numbers of losses will be judged differently in college football. It’s not even when all else is equal. For a team with more losses to be ranked ahead of a team with fewer losses usually takes something pretty drastic. This is sometimes less true after the bowls, but is certainly true before the bowls. At least between Power 5 conference teams (let’s leave the Group of 5 out of this discussion), teams being ranked in accordance with number of losses is the one constant.

This is true in the first three years of the CFP and its selection committee. It was true of the BCS. It is true of the AP and Coaches’ Polls, both now and historically. It’s not a rule that’s never broken, and there are certainly a few exceptions every single year, but it by far the norm.

Keeping this in mind, it’s easy to recognize the problem that the Big 12 has. Every year, the Big 12 is going to have more losses among its top teams than the other power conferences have. That is a natural product of having only 10 teams and playing a full round-robin schedule. This means there are 45 losses to go around the conference’s 10 teams. This naturally leads to a lack of quality wins in conference.

Let’s compare this to the SEC and ACC, which are at the opposite extreme. Those two conferences only play eight games and have 14 teams each. This means that those conferences have a very high likelihood of having multiple teams with very few losses. Only two cross-divisional games means that there is a high likelihood of good teams from each division playing only bad teams from the other division — leading to fewer losses by those good teams. This, in turn, leads to more “quality” wins for the other top teams in those divisions.

The odds for the Big Ten are a bit lower, with a third cross-divisional game, but the fact remains that there are decent odds of a top team in one (or each) division only playing the weaker teams in the other division. This still means a good enough chance of more ranked teams in the conference, which means more quality wins in the eyes of the selection committee, and more ranked wins to prop up a Playoff contender.

The Pac-12 shares the dilemma

The Pac-12 is in nowhere near the same boat as the Big 12, but it shares much of the issue. With only 12 teams and nine conference games, each Pac-12 team plays four of its cross-divisional opponents. Therefore, it is impossible for a Pac-12 team to not play one of the top three teams in the opposite division. The odds of playing only the bottom four teams in the opposite division as an incredibly-low 1/15.

For every calculation that the Big 12 made last summer — what teams could be competitive in the league, what quality they could add, how television deals could be affected, and more — the league forgot the most important factor in its Playoff push. It’s simple math, because the number of losses still determines far more than anything else in college football.

In 2014, for example, when both Baylor and TCU barely missed out on the Playoff, a determining factor was certainly the fact that the conference only had one other ranked team –because only one other conference member had less than four losses when Selection Sunday arrived. Had there been more ranked members in the conference — and therefore more ranked wins on Baylor’s and TCU’s schedules–there is a very good chance that one of those two teams could have edged out Ohio State.

Adding a conference championship game could be a double-edged sword (that’s a topic for a different post), but there is no denying the potential upside of adding a quality win late in the season. However, what that also does is just add another loss to a top team in the conference, which inherently makes the schedule of every team they played (which includes the entire conference) just a little bit weaker.

There are only two ways to do that. The Big 12 needs to either decrease the number of conference games it plays — or it needs to add teams to the conference.