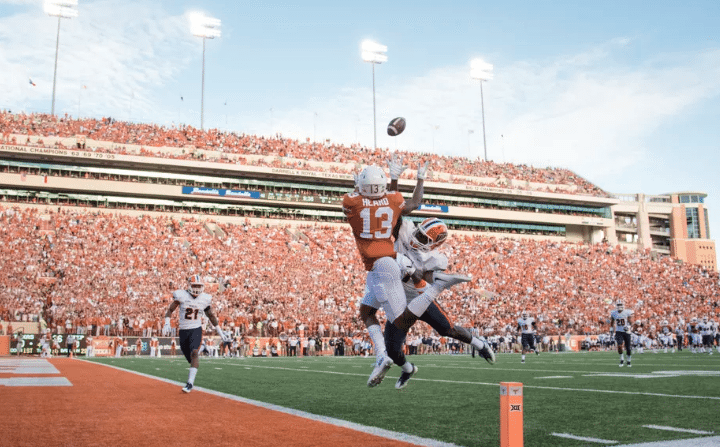 Last season, the Big 12 was all but out of the Playoff conversation by the time the non-conference season was over. Early losses by too many teams knocked out the contenders and ruined the chances for big wins in conference play. While grading the Big 12 schools, we have to keep that in mind. A good non-conference schedule is great for individual teams. But when it adds up to too many losses overall, it can be very damaging to the conference as a whole.

Sept. 8, @South Alabama
You’d think this game is a recruiting trip into Alabama, but it’s weird that it’s played on Friday night. Then again, that’s more up to the television networks than the school involved. Oklahoma State probably isn’t too happy that its road trip was turned into an actual road trip, where most recruits will be playing in their own games instead of watching. Still, it’s a road game against a Group of 5 team that went bowling last year.
Grade: B-

Pat Narduzzi hasn’t made Pitt a Playoff contender yet, but the Panthers did beat the national champions last season. This is a solid and dangerous program, and a dark horse Playoff contender is coming to visit in non-conference play. Props to Oklahoma State.
Grade: A+

Overall:
None of these games stick out as huge ones, but this is one of the best nonconference schedules in the country, if not the very best. All three were bowl teams last year, all three are dangerous, and two of these games are on the road. If Oklahoma State is in a tight race for that fourth Playoff spot, you can bet that the Cowboys will campaign on this non-conference schedule making the difference — and they would be absolutely right.
Grade: A+

Sept. 9, @Arkansas
It’s the return game in a good home-and-home series. TCU should have won last year’s game, but blew it. Can they avenge that loss on the road? Either way, the fans win with this game being played.
Grade: A

Sept. 16, SMU
The Mustangs are improving and are no longer one of the worst teams in FBS. On the right week, they might even be dangerous.
Grade: C-

Overall:
I’d rather the Jackson State and SMU games be a bit tougher, especially if Gary Patterson has TCU back up to its usual standard and possibly challenging for a Playoff spot. Still, this schedule isn’t too bad. It won’t do TCU any favors with the selection committee, though, unless Arkansas somehow has a breakout year.
Grade: B

Sept. 2, Maryland
Tom Herman gets to start his Longhorn career against D.J. Durkin, who has been making major recruiting waves at Maryland but has yet to show much for it on the field. This should be a decent opening challenge for the Longhorns, who should be favored in this game.
Grade: B

Sept. 16, @USC
Assuming Texas is mildly impressive in its first two weeks, this will be the real test for Herman. It could be a huge blowout, but it’s still exciting for fans to prepare for USC vs Texas.
Grade: A+

Overall:
I don’t know who thought it was a good idea to schedule two simultaneous P5 home-and-homes, but I want to thank Texas for doing this. I wish more Power 5 schools would schedule like this.
Grade: A+

Sept. 2, Eastern Washington
A team with an air raid offense and a bad defense really shouldn’t schedule either Washington. You’d think that Mike Leach’s old school would learn from what happened to his new school. If you want to see an FCS over P5 upset this season, this is the game to circle as the most likely. I won’t even give Texas Tech a bad grade for scheduling this. It’s high-risk no-reward, but Eastern Washington basically has FBS-level talent most years anyway, just not an FBS number of scholarships.
Grade: C

Sept. 16, Arizona State
It’s the return trip from a game that gave us a ton of offense and less than no defense last year. This should be fun.
Grade: A

Sept. 23, @Houston
Playing on the road against a good Group of 5 program takes guts, and I’ll never criticize a Power 5 team for doing it.
Grade: A

Overall:
The worst game on this schedule is an FCS team that beat a fringe Top 25 FBS program last year. The other two games are against programs that are probably about equal to Texas Tech, which is all I want to see. This is a very good schedule, even if it might cost the Red Raiders a bowl berth this year.
Grade: A

Sept. 3, vs Virginia Tech (in Landover, MD)
This neutral site game looks to be a good one–it’s why ESPN picked it to be the center of attention the Sunday of Week 1. It’s regional, it features two potential dark horses in their respective conferences, and it gets extra credit because I will hopefully be able to attend–not that it needs the extra credit.
Grade: A+

Sept. 9, ECU
Playing ECU on one day’s less rest than usual might be risky. The Pirates did not look anywhere near their best after the shocking firing of Ruffin McNeill, but this program is still stocked with talent.
Grade: C+

Sept. 16, Delaware State
Well, the Mountaineers chose to eat their FCS cupcake right before conference play instead of to start the season.
Grade: F

Overall:
This schedule has one great game against a good P5 team, one game against a (usually) decent Group of 5 program, and one true cupcake. It’s not perfect, but I can’t ask for much more.
Grade: A-