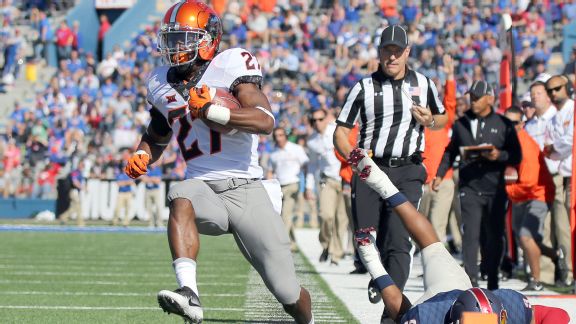 This week, The Comeback’s 2017 college football preview looks at the Big 12 Conference. In years past, this league has featured explosive offenses and some of the top running backs in the country.

Given the Big 12’s tradition, will the changing faces and names for 2017 live up to expectations, or will this be a down year for the conference’s premier position?

Let’s take a look at the changing landscape at running back in the Big 12.

Who are the top returning running backs in the Big 12? 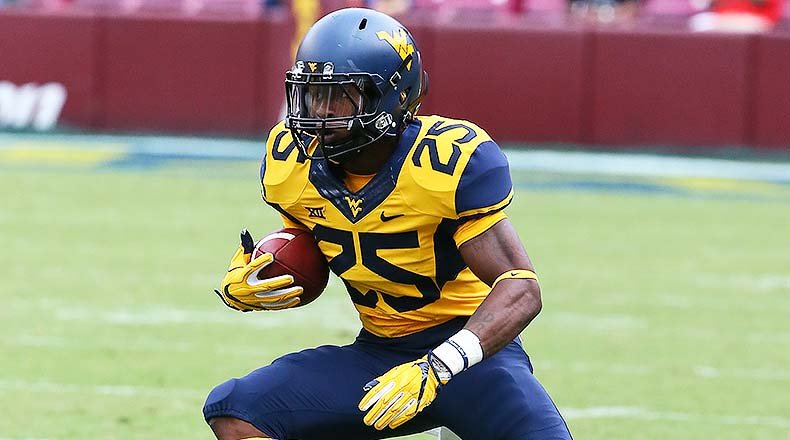 In an offseason of changing of the guard at running back, Crawford comes into 2017 as the Big 12’s leading returning rusher. He racked up 1,184 yards on just 163 carries for a ridiculous 7.3 yards per carry. There simply isn’t a more dangerous weapon at running back in the open field. West Virginia used him to great advantage in first down situations last year, allowing him to average a whopping 8.2 carries per game. While he may be the most explosive running back, he lacks some of the polish and combination of skills of others on this list.

While Justin Crawford may lead the Big 12 in rushing amongst returning players, Baylor’s Terence Williams was a relative touchdown machine. He comes in second amongst returning running backs with 11 touchdowns last season. There is also the fact that he managed to rush or 1,048 yards and 5.7 yards per carry. With former Oregon offensive coordinator Matt Lubik in the fold as co-offensive coordinator look for Williams to have an even bigger role in an offense that will be fun and feature the run game.

Few freshman running backs did what Hill did last season — rush for 1,000 yards. In fact, just six freshman running backs reached that mark in 2016 and Hill was the best of that bunch by the numbers. He rushed for 1,142 yards and six touchdowns. But if you weren’t paying close attention, you likely never heard his name thanks to the loaded position group last season. Expect him to build off a great debut season with some more time in the weight room.

Which RB is due for a breakout season?

Kansas State was doing the whole power running game out of the spread offense thing before Urban Meyer made it cool. So, it should be no surprise that a Wildcat running back would make this list at some point.

While most people will focus on now senior running back — I mean, quarterback — Jesse Ertz, there’s one weapon that may take K-State even further into the Big 12 title race this season. That would be now-sophomore running back Alex Barnes. He was a revelation in limited playing time as part of the three-headed-monster that was running back last season. Barnes was a touchdown machine, scoring a running back-best six touchdowns on the ground. He added 442 yards to those touchdowns and did it on just 56 carries.

That equates to a crazy 7.9 yards per carry, and you’d be hard-pressed to find a more explosive and less talked about running back in the conference than Barnes. The good news is that Barnes appears to have taken hold of the position group this spring and the whole “running back by committee” idea may be tabled for 2017.

No doubt there will be plenty of carries to go around in the Wildcats backfield. But with Charles Jones graduated, expect to see a lot more carries going to Barnes and for him to get a lot more national attention as a result.

Who is a newcomer to watch in the Big 12?

This is an easy one to call. I mean, Texas leaned on D’Onta Foreman for a whopping 323 carries last season. It led to just over 2,000 yards of production as well. But Foreman is off to the NFL and that leaves a gaping hole. One that could be filled by an incoming recruit given the depth at RB last season.

Foreman’s backups combined for just 108 carries and 572 yards. It isn’t as if they were beating down the doors for the offensive staff to get them more playing time. Losing Foreman is clearly a big blow, but look for 4-star recruit Toneil Carter to fill that role nicely.

Tom Herman believes in power football, but also in doing it quickly. Carter, who was the No. 9-ranked running back in the class, provides just enough of a mix to likely be in the mix (see what I did there) for early playing time. Don’t be surprised to see Herman lean on the guys he brought in to help him transition the Longhorns offense.

What is the most intriguing running back situation in the Big 12?

Few Big 12 programs have the depth and diversity that Iowa State has at running back. Mike Warren was on the tip of everyone’s tongues heading into 2016, but it was freshman David Montgomery who ended up topping the rushing charts in new head coach Matt Campbell’s first season at the helm. Neither’s rushing totals will blow you away, as Montgomery put up just 563 yards and Warren finished with just 559 yards and three touchdowns in 11 games.

Don’t let those totals fool you though, Iowa State’s offensive line had major issues blocking anything that moved at them last year. It appears the issues up front on their way to be fixed and look for Montgomery and Warren to be one of the most difficult one-two punches to handle in the run game this year.

Overall, this should be a very interesting year at running back in the Big 12. Transition is the name of the game, and we’re likely to see plenty of new stars emerge that we never saw coming. After all, the Big 12 is largely famous for its craziness these days, so why not add running back to the mix?