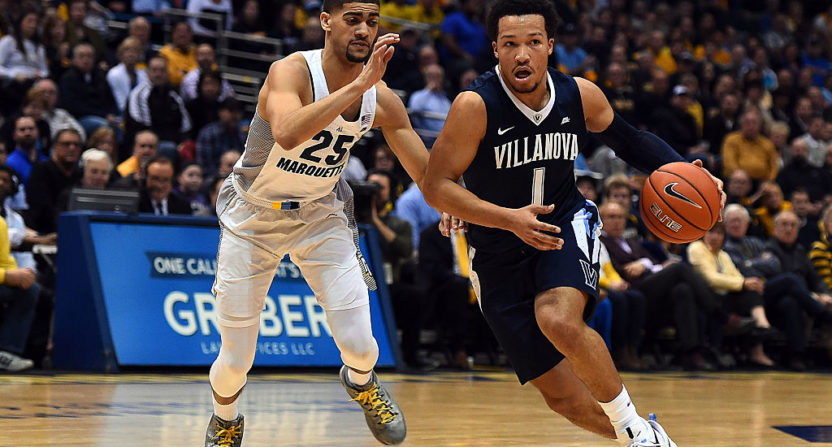 Ever since conference realignment, the Big East has scrapped and clawed its way back to being one of college basketball’s most respected leagues. Although it couldn’t follow up Villanova’s national title with another Final Four appearance, the Big East sent seven of its 10 members to the 2017 NCAA Tournament.

Our 2017-18 season preview continues with a look at what the Big East has in store:

Can Angel Delgado be this year’s Caleb Swanigan?

Delgado doesn’t have a jumper like Swanigan’s, but he’s even better inside and just as ferocious of a rebounder. Last season, while Swanigan dominated his way to All-American status, it was Delgado who led the nation with 13.1 rebounds per game. While Delgado’s defensive rebounding rate in Big East play lagged a few points behind Swanigan’s in the Big Ten, Delgado put up ungodly offensive rebounding numbers, corralling 16.3 percent of his team’s misses while he was on the court in league games.

As The Athletic’s Sam Vecenie pointed out, Delgado more or less matched Swanigan’s numbers during the heart of the season from Jan. 22 onward.

No. 19 Seton Hall’s preview is up. Also, wherein I ask the question: Angel Delgado or Caleb Swanigan? https://t.co/3yxgp5dMcG pic.twitter.com/bmrQBYV3wO

If Delgado builds on last season, mark Seton Hall down as a Final Four sleeper.

You’ll see a lot of people pick Villanova’s Jalen Brunson for Big East Player of the Year because he’s earned that honor as much as Delgado or anyone else based on last year’s performance and high expectations for his junior year. But Delgado has National Player of the Year potential.

No matter who you like for the preseason nod, Delgado vs. Brunson (you can even throw in Xavier’s Trevon Bluiett as a dark horse) should be the most enjoyable conference player of the year race this winter.

Villanova tops the list, as the Wildcats will be in the mix for a top-two seed for the fifth straight season. Only Kansas, where Bill Self has been a top-two seed every year since 2010, can claim such a streak.

Going deeper, the Big East has two other teams that deserve top-20 recognition in Xavier and Seton Hall. The Musketeers fell one game shy of their first Final Four appearance last season. With Bluiett and J.P. Macura back, their backcourt is loaded once again. Seton Hall not only has Delgado but also a deep group that includes potential all-conference players Khadeen Carrington and Desi Rodriguez.

Don’t sleep on Providence either. Are they Final Four good? Probably not. But the Friars made the First Four last year and return their top seven players, including Kyron Cartwright, the top returning assist-man from a high-major league with 6.7 dimes per game.

Is LaVall Jordan ready for a Big East coaching job?

To an outsider, Butler hiring Jordan as its next head coach seems out of place. Here’s a Top-25 program in a high-major league choosing a 38-year-old with one year of experience and an 11-24 career record to lead its team. But when you know more about Jordan and his short but sweet tenure at Milwaukee, you can understand why Butler wanted him.

Butler loves staying within the family, and Jordan played there from 1997 to 2001 before the school gave him his first coaching job in 2003. And while Jordan’s 11-24 record last season at Milwaukee isn’t pretty, he actually exceeded expectations. Following friction in the athletic department, Milwaukee returned only one player who played at least 10 minutes per game. Playing four freshmen and two sophomores, Jordan got his team to the Horizon League championship game where the Panthers nearly upset Northern Kentucky for their fourth win in five days.

No disrespect to the mid-majors, but competing in the Big East is totally different, especially for a program with NCAA Tournament expectations this year. But Jordan showed his ability to make something out of nothing last year, and that’s one of the baseline marks of a solid coach.

Will DePaul’s “new era” be any different?

Relative to the last 13 years of mediocrity and worse, this is an exciting time for DePaul hoops. The Blue Demons just unveiled a brand new arena in downtown Chicago and will open it in style by facing Notre Dame in their season opener. By finally moving out of Allstate Arena, a 25-minute drive from campus on a good day, the program is hoping its new home can serve as a launching pad for their first success since they joined the Big East in 2005.

They have yet to nail a program-changing recruit, but they’re getting closer. 2018 four-star point guard Tyger Campbell verbally committed before reopening his recruitment last month. Louisville freshman Brian Bowen — the one who allegedly accepted a bribe from Rick Pitino’s staff — chose the Cardinals over DePaul and three others.

We’ll see if Dave Leitao can reel Campbell back in or find a different star, but recruiting has already taken a step forward. Sports Illustrated projects point guard Justin Roberts to be among the nation’s top 50 freshmen. Transfers Marin Maric, Austin Grandstaff and Max Strus can all make an immediate impact, and former top-50 recruit Jalen Coleman-Lands, an Illinois transfer, will be eligible next year.

Plenty of questions remain. The Demons have posted a 5-31 Big East record in two years under Leitao, and the new arena, which is still six miles away from the campus, does not guarantee increased fan support. Showing some improvement with a roster that’s better on paper will go a long way toward getting the ball rolling.