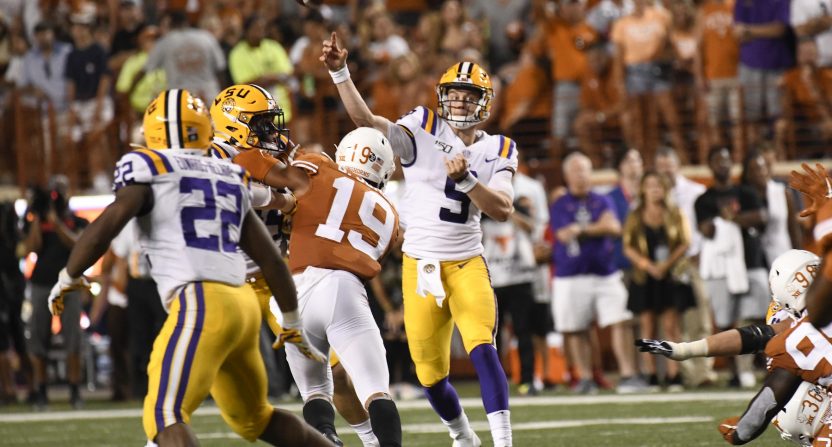 For years, LSU has been missing one key ingredient that could make them a legitimate contender. Now, it seems the Tigers have the quarterback enigma solved and everything else is falling into place for what could be a possible playoff push. Joe Burrow, in his second season in Baton Rouge, turned in the best game of his college career to lead No. 6 LSU to a 45-38 road victory at No. 9 Texas Saturday night.

A battle of two schools bickering over the right to be nicknamed DB U — a reference to the strong lineage of defensive backs — was anything but a display worthy of the debate. Texas’ Sam Ehlinger completed 31-of-47 passes for 401 yards and four touchdowns without an interception. Although Burrow was picked off once, he more than made up for it. The former Ohio State quarterback completed 31-of-39 passes for 471 yards and four touchdowns. The biggest pass of the night, a 61-yard touchdown to Justin Jefferson on a 3rd-and-17 late in the game, allowed LSU to pull away from the Longhorns, who go back to the drawing board for reason to suggest they are “back.”

The win must have been a little extra special for Burrow, because it was his first chance to go up against one of the coaches who helped originally bring him to Ohio State. Tom Herman, who worked with the quarterbacks in Columbus under former head coach Urban Meyer, helped recruit Burrow to Ohio State, but moved on to coach at Houston before getting a chance to work with Burrow in Columbus. After the game, the two shared a warm exchange and some smiles, proving that those connections made on the recruiting trail can last for years, even if the two never spend time on the same team.

But this was a true reminder of just how valuable a competent quarterback is for LSU. The defense tends to be pretty good. The running game at LSU can always be counted on to be a physical asset. But quarterback play has been streaky and erratic for years, from the bulk of the Les Miles era to the Ed Orgeron era. But with Burrow, something just seems to be clicking on offense that has long been missing for the Tigers.

In LSU's 45-38 win over Texas, Joe Burrow became the 1st LSU quarterback to throw for 400 passing yards against an AP-ranked opponent since Rohan Davey in the 2002 Sugar Bowl against Illinois.

He is also just the 3rd LSU player to throw for 400 passing yards in a game. pic.twitter.com/Jk3N1TPcQs

Does this make LSU the biggest threat to Alabama? Well, yeah, it does. But more importantly, LSU has put itself in a position where it may not have to worry as much about Alabama if the ultimate goal is to play in the College Football Playoff. While an SEC championship would obviously be the goal for LSU, the Tigers now have a high quality road win against a Texas team that should still be a top contender in the Big 12 (with Oklahoma), and the Longhorns aren’t likely to take a huge stumble in the rankings. This win should only go up in value as the season progresses, and that could be pivotal.

We won’t spend the time now going down every College Football Playoff scenario, because it’s only Week 2 and we’re not even halfway through September. But it’s certainly a confidence boost to have a win like this in your pocket. And with LSU’s schedule a bit back-loaded with hurdles (Auburn and Alabama at end of October into November, Texas A&M in regular season finale), the Tigers and Burrow should be on cruise control for a little while. It’s a great spot to be in.

As for Texas, they’ll have to wait a little more than a year for their shot at revenge. LSU hosts Texas on Sept. 12, 2020.