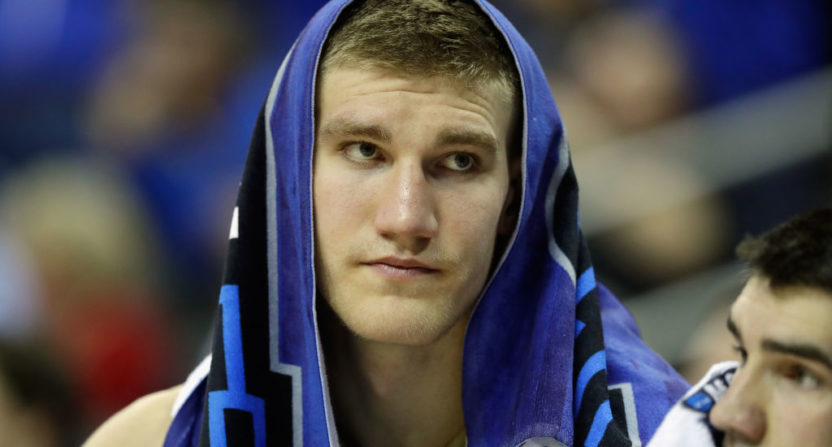 The Big Ten spent the last three seasons as a very mediocre league, as far as high-major college basketball goes. And it’s been a rough opening two weeks for the conference in 2017-18, ever since Indiana’s embarrassing opening night loss to Indiana State through Purdue’s two defeats in the Battle 4 Atlantis Wednesday and Thursday.

The conference has ranked no better than fourth in KenPom’s rankings each of the last three seasons. Although it’s sent seven teams to the NCAA Tournament each year, only twice has a Big Ten team received better than a No. 4 seed. That’s lower than any other high-major league since the 2015 tournament. On average, the Big 12 and the ACC have been putting more top teams on the top three seed lines each season than the Big Ten has total in that time span.

There was some hope it could reclaim its status as a top three league this season. Many analysts saw Michigan State as a Final Four shoo-in, Northwestern received votes as high as No. 11 in the preseason Top 25, and Purdue, Minnesota and Maryland all returned most of last year’s NCAA Tournament teams. The resurgence hasn’t worked out as planned, and the Big Ten ranks No. 5 in KenPom’s conference rankings, far behind the Big 12, Big East, ACC and SEC in efficiency.

Michigan State squandered an opportunity against Duke at the Champions Classic. It’s tough to fault someone too much for losing to a No. 1-ranked team, but that was Duke’s third game — and first away from Cameron Indoor — with a team of mostly freshmen. And their best player, potential No. 1 pick Marvin Bagley III, left the game after 10 minutes due to getting poked in the eye. Michigan State’s team of mainly seniors and sophomores should have found a way to pounce on that opportunity instead of losing by seven.

Purdue’s loss to Tennessee on Wednesday was one thing. The Vols rank No. 37 in Ken Pomeroy’s ratings, but Pomeroy admitted that the Vols received a more favorable preseason ranking — No. 43 compared to No. 57 at 2016-17’s conclusion — by reporting on their official roster that seven different players grew an inch or more during the offseason, which seems like a fishy development. Then the Boilermakers proved they have a lot of growing to do with Thursday’s loss to Western Kentucky.

Moving on, Wisconsin is 0-3 against top 50 teams. Northwestern looked like a high school team against Texas Tech and nearly lost to Loyola Maryland and St. Peter’s, which are expected to finish near the bottom of the Patriot League and the MAAC, respectively. Michigan fell to Tremont Waters and LSU after struggling to beat mid-majors in their first two games. Iowa lost to Louisiana Lafayette and South Dakota State, finishing seventh in the eight-team Cayman Islands Classic. Indiana’s 90-69 defeat to Indiana State may have been the first and the worst of these losses, but the Hoosiers aren’t alone in their struggles.

Mixed in with the bad losses, the Big Ten hasn’t fared well against good competition either. The 14 teams have a combined 2-10 record against the top 50. Minnesota has the league’s only win against the top 40, an impressive victory at Providence.

As far as KenPom’s rankings go, the Big Ten still holds a comfortable lead over the Pac-12, but the Pac-12 is also weighed down with three teams — Cal, Washington and Washington — ranked lower than the Big Ten’s worse — Rutgers. Looking at the top five teams in each conference, they are pretty even.

The Big Ten may or may not slip out of the top five for the first time since in the history of KenPom’s rankings. It’s only Thanksgiving, and the league’s teams have plenty of time to turn things around and hold on to their spot ahead of the Pac-12. The conference should get somewhere between five and eight teams to the NCAA Tournament, but don’t be surprised if they fail to get a top-three seed once again.