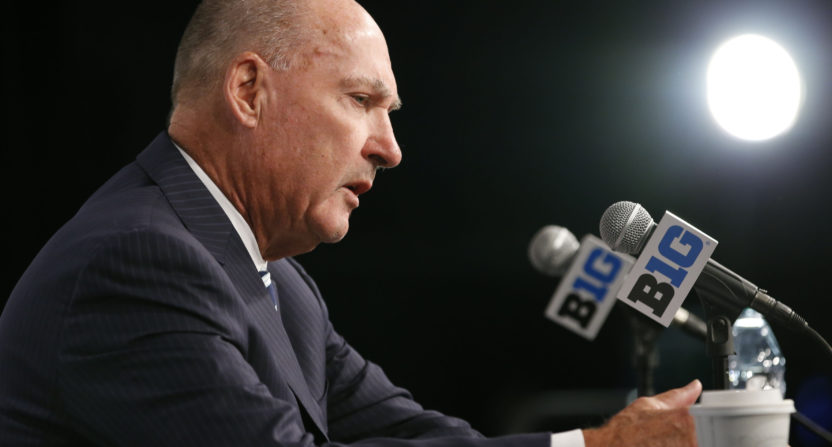 Indiana isn’t a great basketball team this season. The first year under new coach Archie Miller has seen an already-flawed roster weakened by injuries, and a few bad (if fluky) losses early to Indiana State and Fort Wayne set an unfortunate tone.

The Hoosiers have actually performed much better in conference play, and have a pair of near upsets over Duke and Purdue on their resume, but they’re in the middle of a crushing stretch of the schedule. Having lost at home to No. 3 Purdue on Sunday, Indiana now travels to No. 17 Ohio State tonight, and the Hoosiers will host No. 9 Michigan State on Saturday. That’s a daunting stretch of three games in a seven-day span, but it’s even more challenging when you look at the bookends.

Indiana played at Illinois last Wednesday, which came after a Monday game against Maryland. The Hoosiers will have to travel to Rutgers next Monday, just one day after the Michigan State game. In fact, from January 19 through February 5, Indiana will have played seven games in just 18 days; effectively 17 days, considering the late tip back on the 19th.

That’s an absurd stretch; March Madness might be a fairly condensed month with plenty of travel, but the most a team can play is seven games in 20 days (going from the second day of First Four games all the way to the championship). In fact, other than preseason tournaments, the only comparable stretch of play for college athletes is in a conference tournament, if a lower-seeded team makes a deep run.

That’s fitting, because the Big Ten Tournament is the only reason the Big Ten’s schedule is so condensed (and it’s this condensed despite each team playing two conference games back in December, another change). Specifically, Big Ten commissioner Jim Delany’s desire to hold the Big Ten Tournament at Madison Square Garden, borne out of the same senseless foray into the New York City area that brought the Big Ten Rutgers. (Which has gone so well.) The Big East has the venue booked a traditional conference-tournament time, leaving the Big Ten to host its event a week early.

Obviously every Big Ten team is facing similar stretches throughout the year to the one Indiana has now (though perhaps not the “three top-20 teams in a week version), but Archie Miller hasn’t been afraid to point out the problems inherent with a run like this. Via Inside The Hall, here’s Miller last week talking about the schedule on his radio show:

“The one thing that’s really unique about our schedule is we have three two-games-in-three-days. And on the second game, it’s always on the road. We do that three times within a three week period of time. I’m not sure any college basketball team in conference (play) is looking at that odd of a landscape where you play on a Monday at home against Maryland and then have to find a way to get to Illinois for a Wednesday night game with a one day prep…

Those turnarounds are very difficult. In some cases, the team you play has a very short window to prepare for you as well. In some cases, that team could be sitting there waiting on you a few times. It’s uneven, it’s to be expected with what the league has developed with Madison Square Garden this year. There’s no reason to really get into it in terms of fairness, but it is going to be a difficult task for our guys.”

Miller went on to talk about how it impacts the team in terms of practice and prep:

Miller said practices are going to get cut down to between 75 and 90 minutes of time on the floor. When there is only one day of rest between games, Miller said the team might only hold walkthroughs because of the importance of making sure the team is rested both emotionally and physically.

Beyond that, it’s fair to wonder just how much of a distraction this is for the players, who are still expected to maintain their class schedules and academic standing. (And, obviously, they’re not getting paid, even though they’re required to travel and practice and play for dozens and dozens of hours each week; there’s no way that’s adequate recovery time for 18-22-year-old kids.

And it’s all for the one-off visual of Purdue taking on Minnesota on a Friday afternoon in front of a half-full Madison Square Garden, two weeks before the NCAA Tournament. That the Big Ten’s NCAA-bound teams will have to sit around for up to two weeks is another problem Delany apparently doesn’t care about.

This scheduling makes no sense, it’s bad for everyone, and as usual with college athletics, the players have it worst of all.