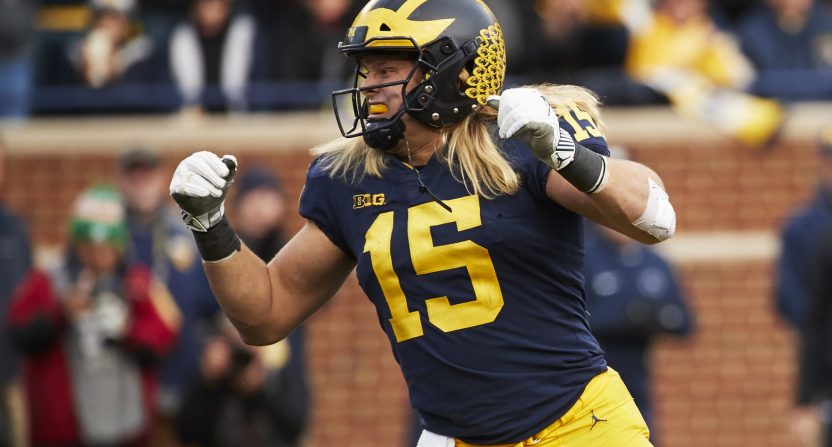 The Big Ten Conference has nine bowl-eligible teams this year, and all of them will be competing this postseason. Last year, the conference went 7-1 overall in bowl games, with Michigan the only loser (much to the delight of fans in Columbus). The conference will only see two teams playing in New Year’s Six Bowls, down one from last year. It will be hard to live up to last year’s standard for the conference considering Big Ten schools are underdogs in six of the nine matchups, but that’s why they play the games.

For the third time in as many seasons, Michigan and Florida will face off. The fanbases are not happy about this development (just check Twitter), but it was really the only choice, as the committee was not going to put the all-Florida matchup of Florida vs UCF in the Fiesta Bowl in Arizona. Michigan won the previous two games and the Wolverines have won all four meetings all-time.

Key matchup: Both teams are anchored in the trenches. Neither team has the huge, deep-play capability, and neither runs particularly fancy defensive sets. Florida likely has the better secondary, but the Gators don’t really have the downfield threats (or the quarterback) to take full advantage of that. Each of these teams just tries to line up and push each other backward. Whichever team can control the line of scrimmage more — on either side of the ball — will be the best-equipped to come away with the win. 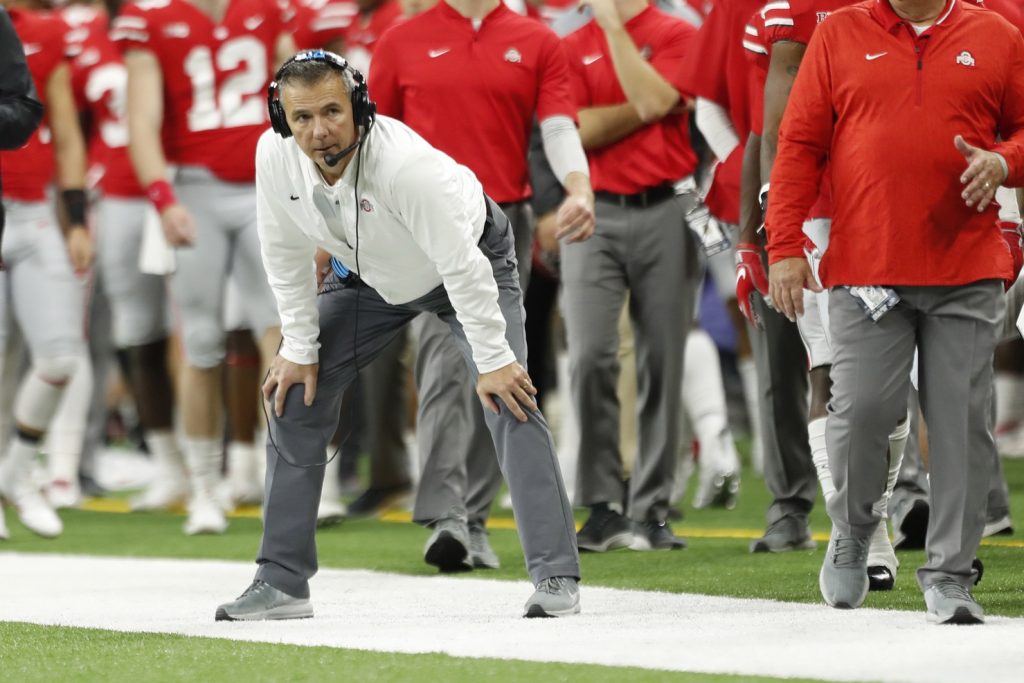 The Buckeyes will represent the Big Ten in the Rose Bowl for only the second time in the BCS/CFP era. Equally shockingly, this is only Ohio State’s third trip to Pasadena since the 1985 season. The emotion and interest will be super-high for this game, considering that it is (as of now) Urban Meyer’s final one on the Ohio State sideline.

Key Matchup: Dwayne Haskins vs the Washington secondary. Ohio State has a talented receiving corps and an elite quarterback. Washington’s defense has been stout, though there haven’t been too many highlight-reel plays. Whether or not the receivers can find space and Haskins can make the throws will determine this game. Ohio State has struggled at linebacker all year, so expect for the Huskies to be able to break a few big runs. Washington will put up some points. Ohio State should win if its offense can live up to the standard that it’s set all year, against one of the best defenses it’s faced.

Minnesota’s season is quite an enigma. P.J. Fleck will be coaching his first bowl game at the helm of Minnesota. He got there via quite the turbulent course. The Golden Gophers beat a good Fresno State team, along with Purdue and Wisconsin. They also played both Ohio State and Northwestern close. On the other hand, Minnesota also got blown out by Nebraska and Iowa. This team can play really well for its biggest games, but it’s also capable of incredible lows. Across the field, the Gophers will face an almost-certainly inspired Georgia Tech team, who will be playing for legendary coach Paul Johnson in his final game.

Key Matchup: How well can the Minnesota defense prepare for the triple-option offense. Paul Johnson’s flexbone is a thing of absolute beauty when executed properly. We haven’t seen it at its best since the 2014 season, really, but it will be difficult to stop. If Fleck can properly prepare his defense, then this should be a very exciting game. But if Minnesota can’t get stops, then Paul Johnson will sail off into the sunset with one final bowl win. 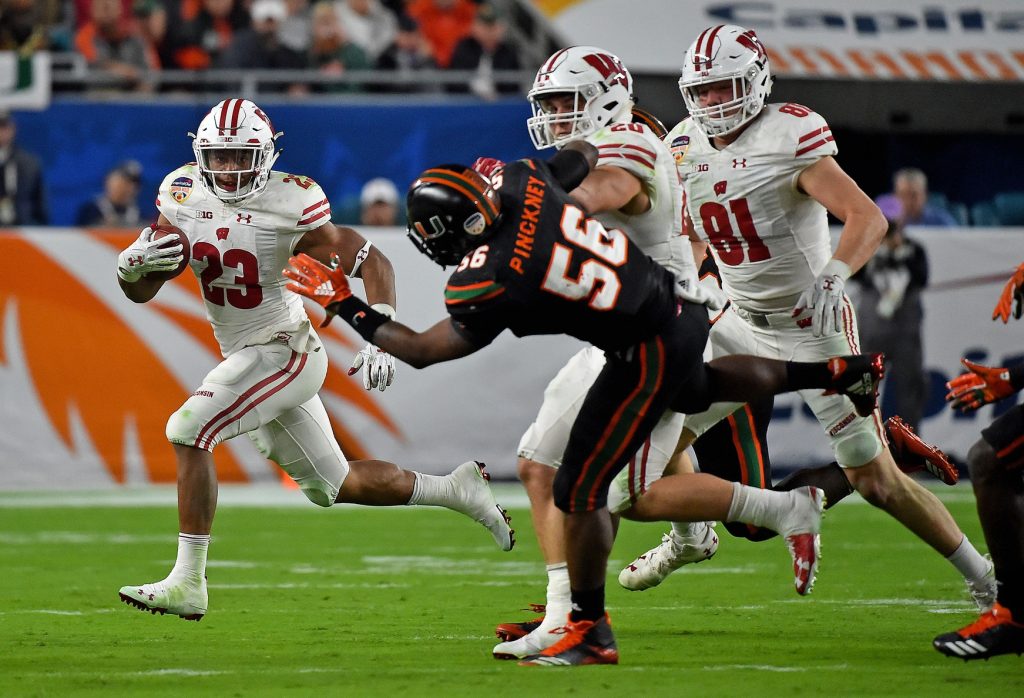 For the third time in the past ten years, the Wisconsin Badgers will face Miami in a bowl game. Last year, of course, the Badgers came back from a 14-3 deficit to dominate Miami, prompting head coach Paul Chryst to *ahem* “comment” on Miami’s famous turnover chain on the sideline. This year, though, Wisconsin is ending the season pretty much in free-fall, a far cry from last year’s Top 10 team that was a few yards from a College Football Playoff berth. Both Wisconsin and Miami need to turn things around this season, and this bowl game will be a major opportunity for each to build some necessary momentum heading into 2019.

Key Matchup: The Wisconsin defense vs the Miami offense. As was the case in their last two meetings, Wisconsin’s defense doesn’t quite have the speed to match up with Miami’s skill players. The Badgers twice overcame that by playing solid fundamentally and winning the battle at the line of scrimmage. Speed doesn’t help receivers if the quarterback doesn’t have time to find them. The Badgers will need to do something similar or Miami should be able to pick apart the secondary. Of course, I say “should” because the Hurricanes have had their own struggles at quarterback all year long.

Sometimes it’s hard to realize that Auburn only went 7-5 this season. The team that beat both Alabama and Georgia last year was dominated by both this year. Auburn did defeat Washington to open the season in a mistake-filled game, but the Tigers have disappointed the entire rest of the season. Purdue has very strong wins over Boston College and Ohio State but also disappointed otherwise.

Key Matchup: Honestly, this is a battle of motivation. Whichever team comes out stronger will matter far more than the Xs and Os on the field. What will Auburn bring? Will Purdue respond to Jeff Brohm’s show of loyalty in rebuffing Louisville? Both teams have potentially explosive offenses that are also prone to slumps. Auburn is probably better in the trenches, but Purdue plays its own game well enough to not really get overwhelmed by bigger and faster lines.

What happened to Michigan State this season? This experienced team was expected to be a potential CFP contender. Instead, the Spartans started off by losing to Arizona State in Week 2 and added losses to Northwestern, Michigan, Ohio State, and Nebraska. Honestly, the win over Penn State sticks out as being more surprising than any loss. This team almost lost to Rutgers to end the season. Dantonio never seems to stay down long, but this program is in a very different place than when it last played Oregon, early in the 2015 season.

Key Matchup: The Michigan State offense vs the Oregon defense. We know that Oregon will score and that Michigan State should be able to earn some stops. This team has a ton of talent and experience on defense and has kept every single opponent except Utah State under 30 points. The question is whether this offense will be able to get anything done. The Spartans have been able to move the ball (inconsistently) under Brian Lewerke, but putting points up has been a major challenge this season. Will that change in the bowl game? If it doesn’t, beating Oregon will be very difficult unless the defense plays its best game of the season.

The Holiday Bowl has surprisingly treated us to some great games in recent years, but this season should be no surprise. We get two ranked teams that play similar styles. Northwestern is coming off its first-ever Big Ten West Division title, though the Wildcats couldn’t beat Ohio State in the championship game. Utah, meanwhile, couldn’t get past Washington to win the Pac 12. We should see a great game in San Diego.

Key Matchup: It’s hard to point to one matchup in this game that will matter most. Both defenses are solid and play fundamental football, while both offenses grind it out and try to just beat opponents down. Both coaches are great- generally conservative, but willing to play risky when called for. The Northwestern offense is somewhat more mistake-prone, and Clayton Thorson is likely the X-factor in this game. It should be a great one to watch.

This will be Iowa’s third Outback Bowl this decade, with the Hawkeyes going 0-2 so far. In fact, last year’s Pinstripe Bowl win over Boston College was Iowa’s first bowl win since 2010. Iowa has lost three straight bowl games against SEC schools, and the early look at this game seems like that will stretch to four.

Key Matchup: How will Iowa do on the line of scrimmage? The Hawkeyes entire scheme is based on winning the battle in the trenches on both sides of the ball. No team has managed to dominate Iowa up front this year, which is why all four of Iowa’s losses were close games. Mississippi State, though, has speed and strength in the trenches (especially on the defensive line) that Iowa hasn’t yet seen this season. If the Hawkeyes are going to win, they need to be able to run the ball and for Nate Stanley to have time to find open receivers. If the offense can’t do much, then it’s hard to imagine the defense standing strong against a powerful Mississippi State offensive line- with a great (and mobile) quarterback behind it. 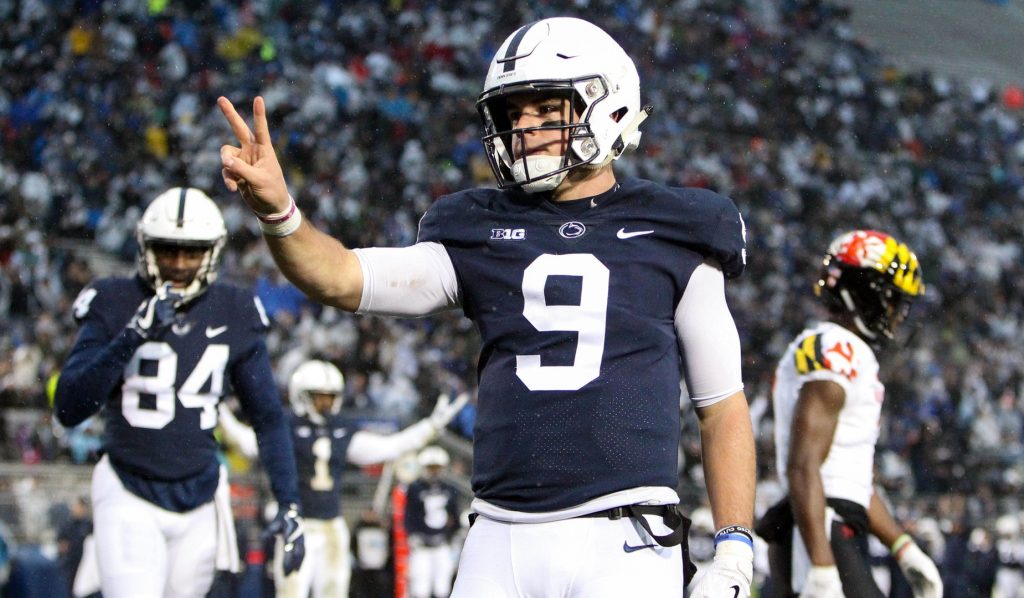 After being knocked out of the Playoff conversation by Michigan State, the Nittany Lions essentially became an afterthought. They were always ranked as a good team, but no one paid much attention to them. It’s hard to know just how good this team is, because Penn State struggled against just about everyone once October started (except Maryland). This team is clearly supremely talented, but it’s hard to believe that it gave its full effort while beating Indiana by five or Rutgers by 13. What will happen in a bowl game with a year-end Top 10 ranking on the line? That’s anyone’s guess.

Key Matchup: Benny Snell vs the Penn State defense. Kentucky has lived by its defense all year. That unit is what made this even a winning season, let alone a Top 15 one. Penn State, though, will find holes in that defense. Trace McSorley will certainly want to end his college career with a bang. Maybe that means he can make mistakes, but it will most likely mean a huge showing from the quarterback. That means that Kentucky will need to find a way to keep pace. This offense is generally Snell or bust- and Snell will definitely want to make up for last year’s bowl fiasco. Kentucky’s best chance to win this game is certainly going to be by Snell having a huge game.