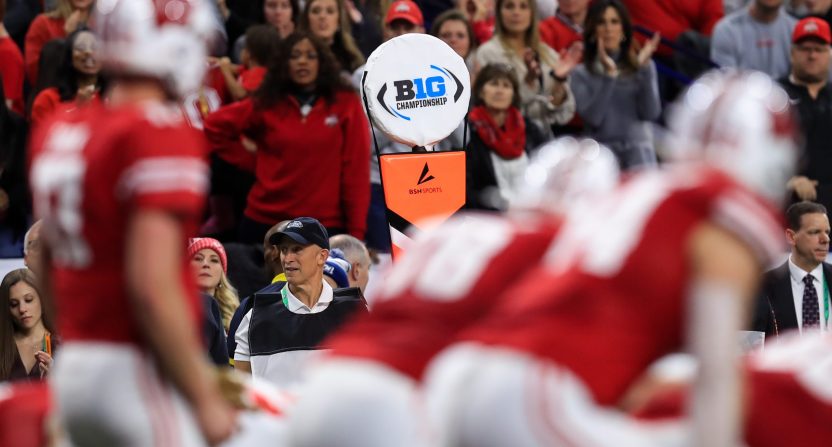 College football is seemingly in a perpetually shifting landscape as everyone attempts to put themselves in the best position possible to compete and make tons of money.

As the SEC continues to set the tone, conferences like the Big Ten, ACC, and Pac-12 are always looking for ways to give their own teams any advantage they can while also staying in lockstep when it comes to finding ways to remain relevant and keep eyeballs on them. That is what is driving a potential change in the Big Ten that could alter the way the conference chooses its champion and prepares for the eventual expansion of the College Football Playoff.

According to The Athletic’s Scott Dochterman, the Big Ten is exploring the elimination of its East and West divisions, which has produced imbalanced and less-appealing Big Ten Championship games in recent years. In their place, conference teams would play three opponents annually and cycle through the other 10 teams over the course of a few seasons.

Without divisions, the Big Ten could have seen Ohio State and Michigan have an immediate rematch for the conference championship this season, which would have been a rating bonanza for the conference. The current divisional format ensures that can never happen.

“We’ve had several conversations,” Barta told The Athletic. “One of the things that we’re watching is whether it’s related to The Alliance, which we’re talking through and/or, what gives us the best opportunity to have the most success in the College Football Playoff format?

“We’re wondering if we’re going to know what the format is before we have to make that decision. So, we’re kind of waiting to see where that lands. But we have had active conversations about the schedule beyond 2022.”

The CFP won’t be expanding in the near future but the leading assumption is that, eventually, they will expand to eight or even 12 teams. And when that happens, the conferences want to be in the best position possible to send multiple teams regularly.

Barta says that conference admins have also discussed playing only eight Big Ten games beginning in 2023 in order to increase the number of games against Pac-12 and ACC teams, in order to boost the importance of The Alliance.

The immediate reaction from college football circles is one of support, especially in how it can have a ripple effect across the other conferences involved.

Been saying for years that the Big Ten should get rid of divisions. Protect a couple of rivalries for each but rotate everyone around so you actually play everyone in your league regularly. Two best teams can and should play in the B1G championship game every year.

this opens up the door for OSU vs Michigan in back to back weeks which would have been the case this past season.

TV nets would certainly love to a champ game between some combo of OSU/PSU/UM. https://t.co/RV8wGhGDCj

This is the key to the Pac-12 dropping to 8 conference games games. Can't make the extra noncon less valuable to TV – that game needs to be vs high-level opponents https://t.co/ZXWTaqcwbw

Of course, these are just discussions for the moment. But if they’re willing to go public with these plans, there’s likely some fire behind that smoke.