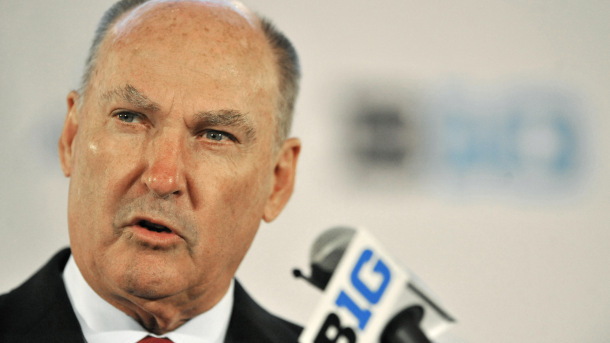 USA Today Sports, which received a copy of the conference’s newest federal tax return, estimated the amount of the bonus based on a comparison to returns from prior years. And according to the Big Ten, Delany deserves that compensation based on the market value of his leadership.

Here’s a statement by Minnesota president Eric Kaler, chair of the Big Ten council of Presidents and Chancellors to USA Today.

“Commissioner Delany has provided invaluable leadership for Big Ten member institutions while delivering first-in-class performance during a time of great transformation in college athletics. He has not only successfully balanced the missions of academic achievement, student-athlete development and athletic success, he has successfully developed the resources necessary to strategically position the conference for success well into the future. His compensation is market-competitive, based on an independent third-party analysis, and reflects the value and impact of his leadership.”

Market value. Hmmm, where have we heard that term before when discussing the big money involved in college athletics and the romantic idea of amateurism?

Let’s start with how Forbes estimated that the market value of NCAA athletes, who receive just their scholarship and in-kind services, is worth several million dollars, yet one study showed 85 percent of high-major football and basketball players live below the poverty line. We also recently learned how the media attention around Gonzaga’s run to the NCAA Tournament title game is valued at $406 million to the school.

You can’t ignore how much cash college athletes bring in, at least in revenue sports. Yet the NCAA has thrown money all over the place to research how to help its athletes instead of just distributing that money to the athletes themselves.

A recent poll showed about 40 percent of people think college athletes deserve compensation beyond their athletic scholarship, which is more than ever before. Meanwhile, the Big Ten reported nearly $500 million in revenue on its new tax return, which is more than double what they made in 2010. The league’s new TV deal with ESPN and Fox should push that number even higher in future years.

Let’s remember where all that money is coming from.