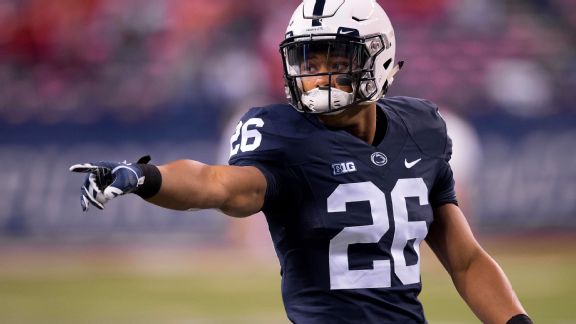 Few conferences have had their identity tied to the run game like the Big Ten Conference has. While the pass-happy offenses of college football are taking over other leagues, the run game still matters most in the Big Ten.

But the changing coaching staffs of the league have brought about changes to the importance and depth of quality running backs in the league. While P.J. Fleck and Jeff Brohm bring pass-first offenses to the mix in 2017, there is perhaps no conference with a better chance for star power at running back than the Big Ten.

So get ready for some big runs and some ground and pound. It’s welcome news for the old school football fan out there.

Is there a running back at a Power 5 school with less hype and more career production than Rodney Smith of Minnesota? My answer is no, especially considering he’s rushed for 1,828 yards in his first two seasons in a Gophers uniform. With a more settled offensive line and a transition in the coaching staff, look for Smith to go from fringe to nationally known quantity this season.

In fact, I’m so bullish on Smith this season I made this bold prediction while previewing the team: He’ll lead the Big Ten in rushing yards in 2017.

Full disclosure: the top two on this list are more like 1a and 1b for me. Northwestern’s Justin Jackson is easily the best running back the school has ever produced. He also comes into the season as the leading rusher from last season in the B1G, racking up 1,524 yards and 15 touchdowns on the ground. It was also the third-straight 1,000-yard season of his career. That’s hard to beat at any level, and yet Jackson has only increased his production every year despite defenses knowing all about him. What will Jackson do for a finale? It sure is going to be fun to watch.

It’s like splitting hairs between Jackson and Saquon Barkley, but the nod goes to Barkley at this point due to his ability to be a bit more of a home run hitter. Barkley averaged a Big Ten-best 5.5 yards per carry and led the league with 18 rushing touchdowns last season. All of that while also averaging less than 20 carries per game.

Barkley may well may be the best running back returning in college football based on the numbers and situation he returns to in 2017. Don’t be surprised to see him mentioned on the fringe of the Heisman Trophy to start the season and only grow if the Nittany Lions have another year like 2016.

Yes, Jeff Brohm’s offense is all about explosive plays in the pass game. Yes, Purdue’s offensive line was a complete mess last season. But Anthony Wales did rip off 1,621 yards, average 6.8 yards per carry and rack up a ridiculous 27 rushing touchdowns last season for the WKU, so it isn’t like Brohm doesn’t know the value of a great running back. Jones has a bit of Wales’ game in him, so as long as the offensive line can make a jump towards respectability, look for Jones to be the talk of the Big Ten as we head into October and beyond.

Jones put up 616 yards and four touchdowns behind arguably the second-worst offensive line in the Big Ten last season. While that won’t blow you away, Jones is an explosive player and one of the best pass catchers out of the backfield as well, catching 32 passes last year alone. That’s something that Brohm has openly talked about using to his advantage in 2017, while the rest of the run game comes along.

While this is a little bit of a cheat, because James has a track record at Pitt to look back on, he also has the best chance to make a mark on the Big Ten rushing scene as a newcomer in 2017. Playing one season without the head coach he committed to, James knew the situation wasn’t right at Pittsburgh. After sitting out the 2016 season as a transfer to Wisconsin, James went from No. 2 on the depth chart to pushing expected starter Bradrick Shaw for the starting gig following spring ball.

He’s not just an in-between-the-tackles guy, though, and may be the best pass protector and pass catcher amongst the running backs. That is something head coach Paul Chryst can work with, so look for James to see plenty of the ball in 2017 — starter or not.

Wisconsin is the easy choice here, but there are two very intriguing running back situations in the Big Ten for me. The Badgers are one, with Ohio State being the other. However, they are intriguing for very different reasons.

UW’s tradition and production at running back is second-to-none over the last 20 years. However, the last three or four years have seen a bit of a dip in the production side. That began to change last season, with Corey Clement having a “quiet” 1,375 yards and finishing third in the B1G rushing race. He’s gone, as is fellow senior Dare Ogunbowale.

But depth appears to be there despite the losses, thanks to a breakout redshirt freshman season from Bradrick Shaw and the transfer of Chris James from Pitt. UW also brings in New Jersey’s back-to-back state 100-meter dash champion in Jonathan Taylor and bruising junior Taiwan Deal. Let’s just say the deep and powerful Badgers backfield of the past appears to be back, on paper. Will that translate to met expectations on the field? That’s what is so intriguing about this varied group of running backs in Madison.

Meanwhile, in Columbus — we simply can’t go a full piece about Big Ten running backs and not mention Mike Weber. That would just be insane. After all, he put up just over 1,000 yards and had nine touchdowns in his debut season for the Ohio State Buckeyes. Not a bad start to say the least.

But OSU can’t just be a one-trick pony at running back again this season. Fellow freshman Demario McCall was second amongst running backs last season, but put up just 270 yards and four-star true freshman Antonio Williams went from hyped to in the dog house it appears. OSU adds J.K. Dobbins to the mix as well, so it will be very interesting to see how the run game survives without Curtis Samuel and the transition that will happen at the H-back spot.