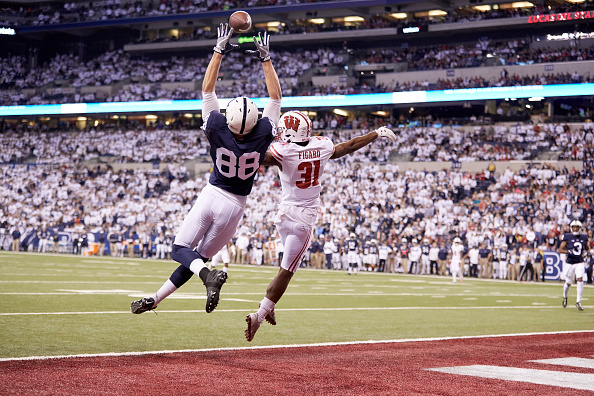 The Comeback’s Big Ten position previews continue with a look at the conference’s best receivers. Here’s everything you need to know about the league’s top pass catchers.

Q. Who are the top returning receivers in the Big Ten?

4. D.J. Moore, WR, Maryland – One of the better kept secrets in the league last year, Moore had a fine season for the Terrapins in 2016. He ranked in the top 10 in the conference in yards per catch (seventh), touchdowns (seventh), and 30-yard receptions (eighth). He was especially dangerous on first down, averaging 20.21 yards per catch, with 12 of those 14 receptions resulting in another first down. Look for Moore to post even bigger numbers this fall with the departures of Teldrick Morgan and Levern Jacobs.

3. Malik Turner, WR, Illinois – Turner was one of the few bright spots for an Illini passing game that ranked 109th nationally. He was one of the more dependable targets in the B1G last season, ranking fifth in the league with 4.4 receptions per game. He was also at his best when Illinois fell behind by more than two touchdowns, averaging 19.33 yards per catch in those situations. Expect him to earn a spot on the all-conference team this fall after earning an honorable mention (in the media poll) last year.

2. Nick Westbrook, WR, Indiana – Arguably the top returning receiver in the league (more on that below), Westbrook narrowly missed the 1,000-yard mark, catching 54 passes for 995 yards and six touchdowns. He was also one of the top deep threats in the Big Ten last year, finishing third in yards per catch (18.43) and second in receptions longer than 10 yards. After watching him catch five balls for 80 yards against a talented Utah secondary in the Foster Farms Bowl, I’m excited to see what he’ll do for an encore this season.

1. Mike Gesicki, TE, Penn State – Yes, I put a tight end at the top of the list, but he’s the best receiver in my opinion. A second-team All-Big Ten pick last year, Gesicki caught 48 passes for 679 yards and five TDs. Those numbers were better than any other tight end in the conference, including All-American Jake Butt.

In addition to his stellar numbers, Gesicki made a number of great plays last season, including a highlight-reel catch against USC in the Rose Bowl. If he continues to post numbers like that again this year, I wouldn’t be surprised to see him earn a spot on the All-American team.

Q. What receiver is due for a breakout season this fall?

I’ll go with Juwan Johnson from Penn State. With the departure of Chris Godwin to the NFL, the Nittany Lion offense needed someone to step up and replace him. Johnson did exactly that, impressing coaches throughout spring practice. He capped off a stellar spring by catching seven passes for 81 yards and a touchdown in the Blue-White game. He’ll build on that performance and have a huge year in 2017.

Q. Who is a newcomer to keep an eye on this year?

I’m going to qualify my remarks by saying I know that the player I’m selecting isn’t exactly a newcomer. However, he’s missed two consecutive seasons, so most people have probably forgotten about him.

The player in question is Illinois’ Mike Dudek. As a freshman, he was one of the top receivers in the Big Ten in 2014, catching 76 passes for 1,038 yards and six touchdowns. Unfortunately, he tore the ACL in his right knee in 2015 and then again in 2016. Now that he’s finally healthy, I think he’ll pick up right where he left off in 2014. Lovie Smith certainly seems excited about his presence in the lineup.

#illini Lovie: I haven’t played a game with mike Dudek. Next time we’ll play he’ll be with us. Have a plan in mind for him.

Q. What’s the most intriguing situation at receiver in 2017?

Make no mistake about it: the Scarlet Knights are a lot better off at receiver this year than they were in 2016. The team welcomes transfers Damon “Duwop” Mitchell (Arkansas) and Jerome Washington (Miami), who should both contribute right away. In addition, four-star recruit Bo Melton arrives this fall, giving Rutgers some much needed speed at the position.

It’s also possible that Michigan transfer Amir Mitchell – who was having a great spring before tearing his ACL – could return later on in the season.

That sounds like a great supporting cast for sophomore Jawuan Harris, who led the team with 39 receptions last year.

It’ll be interesting to see how this talented group of receivers blends into new offensive coordinator Jerry Kill’s scheme.