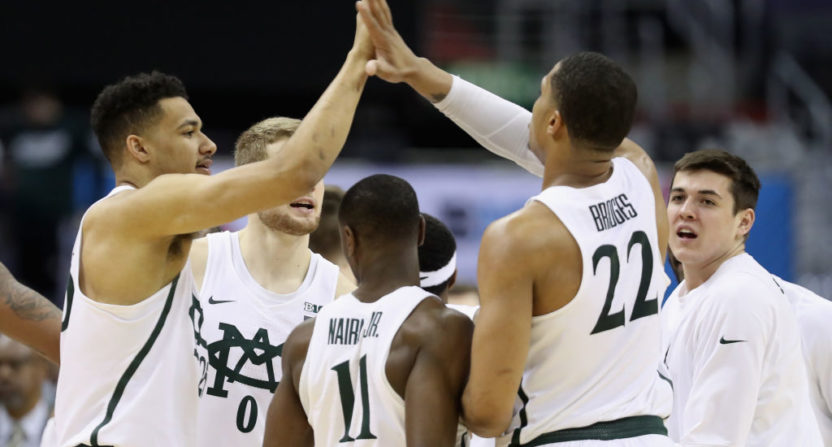 Every Big Ten basketball season starts with the same question: can the conference finally win its first national championship since Michigan State came out on top in 2000? (Maryland in 2002 does not count.) Last year, the conference didn’t have any teams on the top three seed lines in the NCAA Tournament, and the best the conference could do was send a handful of teams to the Sweet 16.

A large part of that came down to Michigan State coming nowhere near the success many anticipated them to have, and Indiana having an injury-ravaged final season under Tom Crean’s stewardship. But the conference didn’t nearly have the depth at the top  nor the middle, which allowed for a team like Michigan to make the run it did to winning the tournament.

There is plenty of uncertainty in the conference and around the sport, though it looks like the league has a few legitimate contenders at the top unlike last season, and a few up-and-coming teams looking to cement their status as league contenders. So is this the year the drought finally ends, or will it enter a 19th season this time next year?

Will the real Michigan State please stand up?

Expectations were sky high for the Spartans last season, and they failed to meet them, only reaching the tournament as an eight seed. But the return of Miles Bridges, the addition of Jaren Jackson Jr. and a returning cast including Tum Tum Nairn, Gavin Schilling and Nick Ward reignites those expectations in 2017-18. Bridges is of course the key here as one of the best players in the country. If Tom Izzo can put everything together with this fantastic player at the controls, Michigan State isn’t just a Big Ten favorite. They’re a national championship contender.

Who challenges the Spartans?

Their biggest rivals may well be Purdue, who, despite losing Caleb Swanigan to the NBA Draft, still have quite a collection of talent. Vince Edwards, Carsen Edwards, Dakota Mathias and Isaac Haas are all still in West Lafayette and they have an interesting group of freshmen to add to the mix. If any team may usurp Michigan State this year, it could be Matt Painter’s crew.

But what of last year’s great surprise teams in the B1G, Northwestern and Minnesota? While times may be quite rough for Rick Pitino, Richard’s group at Minnesota is talented and can play some defense. Nate Mason, Amir Coffey and Reggie Lynch are a dynamic trio, and they should help Minnesota back up its meteoric rise last season.

Don’t forget about Northwestern either. They were a bad call away from upsetting eventual runner-up Gonzaga in the second round. With a veteran-laden team, including Scottie Lindsay and Bryant McIntosh, they will be a force to be reckoned with in the conference.

New coaches in Bloomington and Columbus

The biggest coaching changes in the conference took place with Indiana and Ohio State, beginning rebuilding phases for both programs. Indiana lost so much talent including OG Anunoby, Thomas Bryant and James Blackmon, that it will be difficult for Archie Miller to make an immediate impact with results. And with the lack of time to put together a great class, Indiana is essentially starting from scratch.

Chris Holtmann is also starting from scratch at Ohio State, which has to deal with a team that has lost pretty much all of its talent. Jae’Sean Tate, Keita Bates-Diop and C.J Jackson are still around, and they add Caleb Wesson, the No. 1 recruit in Ohio. This will be a long build for the Buckeyes under the former Butler boss.

Seven teams made the tournament from the B1G last year, which seems about right this year. Wisconsin has more rebuilding to do under Greg Gard, but they still have an all-conference talent in Ethan Happ, which should keep them in the mix for a tournament spot. Maryland lost its catalyst in Melo Trimble but presents a dynamic group of sophomores in Justin Jackson, Anthony Cowan and Kevin Huerter who can certainly help fill some of the void. And although Michigan lost Derrick Walton, Zak Irvin and D.J Wilson, they still have Mo Wagner, Muhammad-Ali Abdur-Rahkman and Kentucky transfer Charles Matthews. Those guys should help keep this team on track for the tournament. Iowa, though without Peter Jok, has a chance to make a run at the Big Dance, too.

Nope, not to me at least. They lost Nigel Johnson, and this is a team that had major problems scoring. But they are an underrated team on defense. Steve Pikiell has more work to do to build this program, another that was essentially starting from zero, but that defense will keep them in most games. Getting three conference wins and one in the conference tournament was a step forward, and look for another small step forward this year. Meanwhile for teams like Nebraska, Illinois and even Ohio State, who could finish behind them, look out below.