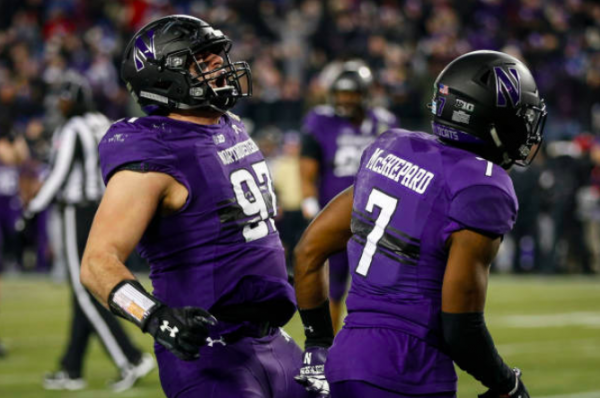 I’m up to the Big Ten West in grading nonconference schedules. The division only has one real Playoff contender (that would be Wisconsin), and the Badgers did not schedule like one in the nonconference. How did every other team in the division do? Did anyone else challenge themselves better? Let’s look at them.

A few notes before I begin. First of all, this is a highly subjective process, because it has to be. I have general outlines, but every team has to be judged on its own merits. It would be foolish, for example, to expect the exact same schedules out of Alabama and Kansas. Obviously, a College Football Playoff contender has to be held to a higher standard.

Second of all, I will give a grade for each game and an overall grade. The overall grade is not simply an average of the individual grades. It is a grade in its own right looking at the totality of a team’s nonconference schedule. Every game against an FCS team earns an automatic F. But if a Power 5 team schedules one FCS team and two other really good games, the one FCS game won’t really hurt the overall grade.

Finally, the Big 12, Big Ten, and Pac 12 are relatively simple as to how to judge the schedules. There are only three games. I expect one game against a Power 5 team of relatively equal standing. The second game should be against at least a challenging Group of 5 team, and I’ll accept one cupcake as the third game. The ACC and SEC–who each play four nonconference games–present a very different challenge in grading.

Sept. 1st, Kent State
Illinois opens up with a cupcake as weak as any other in the MAC.
Grade: D

Sept. 15th, vs USF (in Chicago, IL)
It’s great when Power 5 teams play top Group of 5 teams. This will be our second chance to see where USF is at without Quinton Flowers. (USF plays Georgia Tech the week before.)
Grade: B

Overall:
Illinois plays two games it should win and a third game that will probably be fun to watch. For a team that will need all but a miracle to make a bowl, that’s not too much to ask.
Grade: B+

Sept. 8th, Iowa State
This rivalry often provides us with good games, and this year both teams are mid-to-top P5 teams. Should be great.
Grade: A

Sept. 15th, Northern Iowa
This is an FCS game, but Northern Iowa is a good program that is often competitive in these quasi-rivalry games against Power 5 Iowa teams.
Grade: F

Overall:
This schedule should honestly contain three competitive and entertaining games. Iowa is a program that seems to pull out great seasons every once in a while, and this team has the seniors to do it. This schedule sets up nicely for this.
Grade: A

Sept. 8th, Fresno State
A decade ago, playing Fresno State would be a tough game for any P5 team. Since then, it’s been all downhill. The Bulldogs actually had an unbelievable turnaround in Jeff Tedford’s first season last year. This game was scheduled as a total cupcake, but Minnesota might have backed into a competitive game out of it.
Grade: C-

Sept. 15th, Miami (Oh)
Miami has been one of the worst teams in all of FBS since Ben Roethlisberger left. The past two years have been a step in the right direction, but this is still a team that shouldn’t beat any P5 team, except maybe Kansas.
Grade: D

Overall:
This is, quite possibly, the worst schedule in all of P5. We’ll have to see if anyone from the Pac 12 or SEC can outdo it, but so far this hits rock bottom. If P.J. Fleck can’t make a bowl for a second straight year with this schedule, people will start to wonder whether he is the right fit for this team.
Grade: D-

Sept. 1st, Akron
The Zips have been improving under Tommy Bowden, but this is still a cupcake game for Nebraska and new coach Scott Frost.
Grade: D

Sept. 8th, Colorado
I really like this home-and-home. It’s between a mid-to-top Big Ten team and a Colorado team that has been towards the bottom of the Pac 12 but has improved drastically recently. This game will give us a very look at just how competitive each team will be in its conference.
Grade: A

Sept. 15th, Troy
I really like it when Power 5 teams play good Group of 5 teams. Troy may have fallen off a bit recently, but this team moved back to being one of the Sun Belt’s best last season and upset LSU in the process. This is a good game from Nebraska.
Grade: V

Overall:
I can’t ask for much more from this schedule. It’s one good game against a P5 team, one against a good Group of 5 team, and one cupcake–but not an FCS team. Good job all around.
Grade: A-

Sept. 8th, Duke
This is a good home-and-home between two pretty equivalent P5 teams. Both are usually pretty good and are on their way back up, though Duke is a far cry from where it was five years ago.
Grade: A

Nov. 3rd, Notre Dame
Northwestern gets a great November game against Notre Dame. Depending on how the season goes, either team could still be in the New Years’ Six game or just playing spoiler.
Grade: A

Overall:
I’m not sure what Northwestern wants from this. Last year, Northwestern won 10 games for only the third time since 1903. With a brutal schedule this year–including back-to-back cross-divisional games against Michigan and Michigan State, a repeat performance seems unlikely. This nonconference schedule is amazing and ambitious, but it forces us to wonder if the Wildcats are biting off more than they can chew.
Grade: A+

Sept. 8th, Eastern Michigan
Chris Creighton has done an incredible job, but this is a game that any Big Ten team should win easily.
Grade: C-

Sept. 15th, Missouri
Five years ago, this would have been an easy blowout in Missouri’s favor. Last year, Purdue easily beat the Tigers as new head coach Jeff Brohm made a statement about his tenure. Both teams look to be improved this year, and it should be a great Big Ten/SEC battle.
Grade: A

Overall:
There are no road games on this schedule, but you just can’t ask for more than two good P5 opponents. I’d be happy with that from a top Big Ten team, but it’s awesome from Purdue, too.
Grade: A+

Aug. 31st, Western Kentucky
The Hilltoppers are a consistently strong Group of 5 team. At least, they were until last year. This probably isn’t an awful game overall, but it’s nowhere near good enough considering it’s the best game on a potential CFP contender.
Grade: B-

Sept. 8th, New Mexico
The Lobos are no longer the worst team in FBS, thanks to coach Bob Davie. They’re still nowhere near a good opponent for a top P5 team.
Grade: C-

Sept. 15th, BYU
Usually, BYU is a decent and tough opponent. The Cougars, however, have taken a tremendous nosedive since Kalani Sitake has taken over. (As a total aside, I would love it if anyone could explain to me how BYU fans seem to love Sitake more the more he does not succeed as head coach.)
Grade: C

Overall:
In an average year, this schedule would not be awful. And, of course, BYU and Western Kentucky are solid programs, so there is always a chance that this schedule will look okay by the end of the season. But, based on where the teams stand right now and how they are expected to do this season, this schedule just isn’t good enough, at all, from a team expected to start around the Top 10.
Grade: D