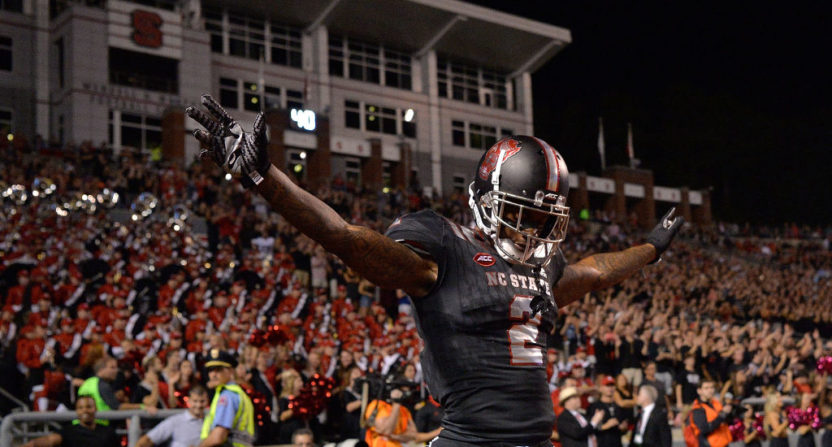 So far this season, the ACC crown has essentially been placed upon Clemson’s head for the 2017 season almost by default. The defending conference champs have looked darn impressive so far this season with three wins against ranked opponents, including two solid beatdowns of their ranked opponents on the road in their stadiums. Clemson is the team to beat in the ACC, but NC State may be the next biggest threat to the Tigers and their conference championship and College Football Playoff plans.

NC State defended their home turf in Raleigh, North Carolina on Thursday night in the first Top 25 showdown in Carter-Finley Stadium since the 2000 season when Florida State romped against the hometown Wolfpack, who at the time were led by Phillip Rivers at quarterback. A 39-25 victory over No. 17 Louisville and the reigning Heisman Trophy winner (Lamar Jackson) was a bit of a monumental win for the Wolfpack as it keeps them in the running in the ACC Atlantic Division.

There are still some holes to plug for NC State that were on display against Louisville. The Cardinals, for instance, took advantage of some big plays and piled up some yards after the catch at times, and Louisville kept the pressure on in the fourth quarter. The Wolfpack gave up 25 first downs to the Cardinals, and allowed nine of 16 third downs to be converted by the visitors. NC State also saw some red zone struggles early on and got a little too cute on offense for their own good. It didn’t come back to haunt them against Louisville, however, as Ryan Finley passed for 367 yards and a touchdown with a pair of wide receivers each going for over 100 yards (Kevin Harmon and Jaylen Samuels), while Nyheim Hines rushed for 102 yards and two scores. It was a well-rounded game plan for the Wolfpack and is why NC State will remain a viable threat in the ACC moving forward.

And the Wolfpack came up with the big play on defense when it needed it the most.

There is still a long way to go in the 2017 season, but right now there is a fun feeling about what is going on in Raleigh. Head coach Dave Doeren is in his fifth season, and this is shaping up to be his best season yet since coming over from Northern Illinois.

Thought NC State had potential in preseason but wasn’t sure they’d get there. This team believes now, and sometimes that’s all it takes.

We certainly should not get too far ahead of ourselves in forecasting the rest of the season for NC State, but the Wolfpack already have victories against both Louisville and Florida State. The rest of the conference schedule appears to be rather favorable, except for that lone home game in early November against Clemson. But let’s do it anyway! Let’s start by taking a look at that schedule the rest of the way as they are now currently 5-1.

As long as #NCState avoids a letdown on the road next week at #Pitt, this could be an interesting final stretch for the Wolfpack. pic.twitter.com/5ScMLcDHlk

NC State now has to follow up this big win with a couple of extra days to prepare for a road game at Pittsburgh. The Pitt Panthers have been pretty rough this season and NC State should be a road favorite. Get out of western PA with a win going into the bye week and the make-or-break part of the schedule is sitting there waiting, starting in South Bend, Indiana. Having already lost a game to South Carolina means NC State has very little margin for error if they are to keep a wild dream of reaching the College Football Playoff alive, but regardless of what happens on the road against Notre Dame (who could be ranked at the time), all eyes should be set on the big home game on November 4 against Clemson. Clemson is the gold standard in the ACC right now and many are penciling them in for the national championship game.

But IF NC State can avoid being tossed around by the visiting Tigers in a way Louisville and Virginia Tech were incapable of, then things get extremely interesting with three very favorable matchups the rest of the way. Clemson is still the team to beat, but NC State just might have the confidence to give them a run.

All of a sudden, ESPN analyst Cole Cubelic doesn’t look as crazy as he did after the season opener.