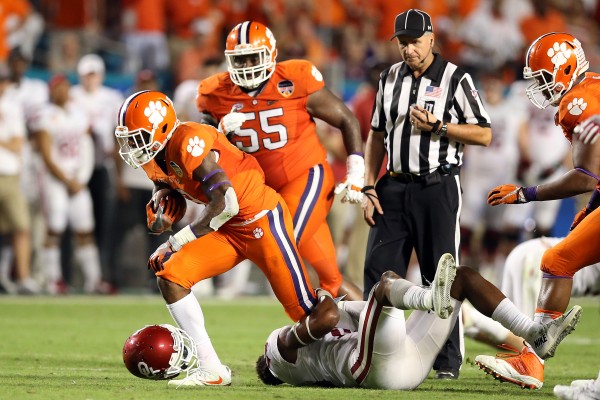 On the first day of 1982, the Clemson Tigers won the Orange Bowl to complete an undefeated season and win a national championship.

On the last day of 2015, the Tigers won the Orange Bowl to move within one conquest of repeating their 1981 perfecto.

As in the 2014 Russell Athletic Bowl, Clemson pulled away from the Oklahoma Sooners in a bowl game. Yes, this contest was a lot more competitive and interesting than last year’s not-as-significant meeting between the two schools. Yes, Oklahoma could have done a number of things to reshape the trajectory of this rematch. Still, the bottom line remained the same in Miami’s Sun Life Stadium:

Clemson overpowered Oklahoma in the trenches and left no doubt as to which team was superior.

Both teams committed plenty of mistakes and left bunches of points on the field, but midway through the third quarter, Clemson stopped making unforced errors. Oklahoma continued to leak miscues at just about every turn.

Coulda, shoulda, woulda is the anthem for the losing team on a stage this big. Winning teams overcome, regroup, and adjust so that they don’t play the what-if game in postseason press conferences.

Clemson — given plenty of reasons to falter — persevered instead, and now Dabo Swinney will take his team to the Desert Southwest to play for the national title on Monday, January 11.

More on the first quarter of this game in a moment, but let’s start with the play which turned this game on its head.

On a night filled with plot twists and turning points, this play below was the biggest one of all:

This is the big turning point of the #OrangeBowl, right here:

The play, a good one called by Oklahoma offensive coordinator Lincoln Riley (OU’s coaching was not at issue in this game), put a receiver in open space in the game’s 39th minute. A simple, straightforward burst would have crossed the line to gain without much of any problem. However, a markedly hesitant run kept the play short of the first down. On the subsequent fourth and one play, Clemson loaded the tackle box. Oklahoma gave the ball to its horse, Semaje Perine, but the Tigers stuffed him. Moments later, what had been a one-score game (for either team) for those first 38 minutes finally became a two-score contest. Clemson gained leverage on the scoreboard at 30-17, forcing Oklahoma into a pass-on-every-down mode, and that was no bueno for a flustered Baker Mayfield, who made far too many mistakes to lead his team to Glendale, Arizona.

That play above typified Oklahoma’s previous journeys to Miami; Orange Bowls; and to any location for a championship-stage game under Bob Stoops. Even when OU defeated Florida State in the 2001 Orange Bowl, Josh Heupel (a Heisman runner-up — in other words, not a bum) led the Sooners to a paltry 13 points. Jason White, a Heisman winner, scored just 14 and 19 points in two BCS title games in 2004 and 2005. Sam Bradford, a Heisman winner, scored just 14 in the 2009 BCS National Championship Game against Florida.

Thursday evening, Mayfield — who finished fourth in the Heisman voting for this season — could not crack 20 points, either. The Sooners have a lot to lament after yet another offensive performance which fell far short of capacity and capability in a defining game.

Yet, of all the mistakes Oklahoma made, the one above was the final dagger. The one which truly served as the gateway to this result came much earlier, in the first quarter.

Oklahoma was actually in control of the flow of play at one point in this contest. The Sooners were leading, 7-3, and were motoring down the field in great rhythm. They were about to face a second and seven inside the Clemson 30 with a chance to add to their lead, possibly to build a 14-3 advantage and force Clemson to pass the ball more than it wanted to.

Then came an unsportsmanlike conduct penalty, something both coaching staffs feared after all the trash talk exchanged by these teams in the 72 hours before kickoff. In a heartbeat, Oklahoma blunted its own drive. The Sooners punted. Not too much later, early in the second quarter, Dabo did this:

Yes, Oklahoma took a 17-16 lead before halftime, and yes, Clemson quarterback Deshaun Watson threw a bad interception to keep the Sooners in front at the intermission. However, given the bright nature of Oklahoma’s initial surge, the inability to turn that first quarter into a commanding lead truly represented the Sooners’ biggest whiff on Thursday. When linebacker Jordan Evans was knocked out with an injury in the second quarter, Oklahoma lost another centrally important defensive player. Earlier in the day, before kickoff, it was announced that defensive tackle Charles Walker would not play. Then came injuries to Perine (who re-entered the game, but without a maximum of effectiveness) and Joe Mixon. The Sooners’ still moved the ball in the second half even without healthy running backs, but they clearly needed to make their first quarter stand up.

Clemson made the Sooners pay a steep price in the second half, storming Oklahoma in a 21-0 post-halftime blowout.

Oklahoma will lament bad injury luck, but Clemson wasn’t exactly untouched by misfortune in terms of attrition. Deon Cain, the team’s second-best receiver, did not play due to a suspension. Shaq Lawson — the team’s best defensive lineman — was knocked out of this game in the first quarter with an injury. Clemson lost important players on both sides of the ball. Moreover, Watson started this game 1 of 8 as a passer. He needed time — in that first quarter — to settle into the game.

Clemson absorbed its fair share of adversity on Thursday.

The difference was that, unlike Oklahoma, the Tigers overcame what befell them. Their backups at crucial positions were better than the Sooners’ reserves.

The ACC champions landed punches throughout the second half. The Big 12 champions absorbed them, and then — in the form of Mayfield’s multiple interceptions — whiffed when trying to punch back.

Clemson shouldn’t have to hear about Oklahoma’s injury luck. The Tigers simply proved to be deeper, stronger, and faster.

They proved to be better… to a considerable degree.

Two Clemson players — Watson (who dazzled after his sluggish opening quarter) and Wayne Gallman — both ran for at least 145 yards. Watson hit OU with his elusiveness in the first half, and Gallman leveled the Sooners with his relentless, leg-churning strength in the second. The Tigers used tricks such as the fake punt in the first half, but then reared back and used country hardball to overwhelm OU in the second.

Clemson won with many measures of finesse, but the Tigers also toted the sledgehammer in this contest. Their top-five Heisman quarterback made much better adjustments, even on a night when his throwing accuracy did not emerge. (Just imagine what Clemson could have done if Watson hit 24 of 30 passes instead of merely 16.)

Oklahoma had its big chance to seize the 2015 Orange Bowl in the first quarter. When the Sooners missed the meatball down the middle of the plate and both teams had a chance to gather themselves during the extended halftime break, only one team regrouped.

That’s the team which is 14-0, headed to Arizona, and one step away from enabling the Palmetto State to party like it’s 1981.