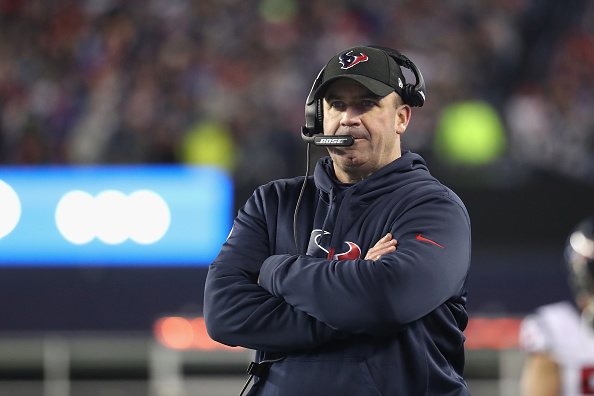 Bruce Feldman of Fox Sports and The Athletic reports that Alabama and Bill O’Brien are expected to reach a deal “in the next few days” that will make O’Brien the Crimson Tide’s offensive coordinator, replacing Steve Sarkisian. Feldman’s report came minutes before Alabama and Ohio State kicked off the College Football National Championship Game.

As I reported last week Bill O'Brien, the former #Texans and Penn State head coach visited Tuscaloosa about replacing Steve Sarkisian as Alabama’s OC.. I’m hearing that deal is expected to happen in the next few days.

Sarkisian is serving as Alabama’s offensive coordinator through Monday night, but he was hired to be head coach for the Texas Longhorns earlier this month.

O’Brien, 51, was fired as head coach and general manager of the Houston Texans in October, after an embarrassing finish to his tenure that included promoting himself to playcalling duties just days before his exit (and last offseason, he traded elite wide receiver DeAndre Hopkins). The Texans went 0-4 under O’Brien this season, but did go over .500 (52-48) with four division titles in his 6 1/4 seasons as head coach.

So, while O’Brien is largely mocked following the mess to end his Houston tenure, he has had success at the college level, and maybe he could rebuild his reputation there. Additionally, he doesn’t have to serve as a head coach in this instance, and he gets a ridiculous amount of talent to work with to help the chances of success at Alabama, along with the most successful head coach in the sport in Nick Saban.

Asked someone who knows Bill O'Brien well about how well he thought BOB would work with Saban: "Really well… He worked for Belichick."

The Alabama offense has been an incredible machine this season, averaging 48.2 points per game (far and away the most for a team that played at least five games this season).