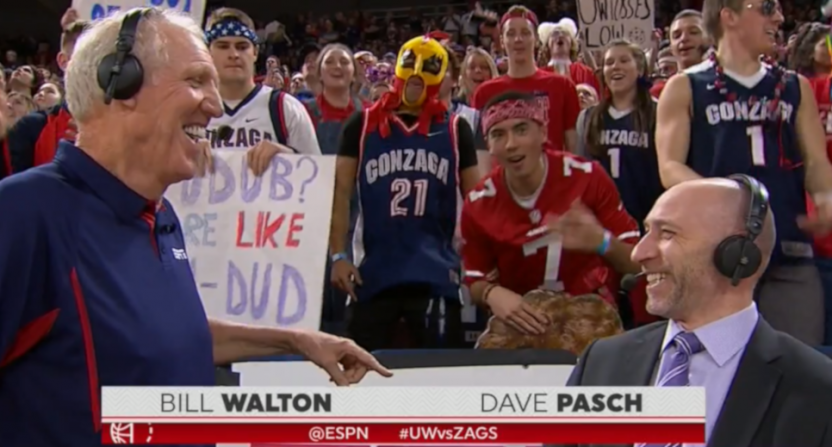 When Bill Walton is calling a game, you know it’s likely to take some detours, to anything from orca breeding habits to mushrooms to axial tilt. However, a reference to former U.S. senator Larry Craig’s bathroom arrest was a bit out there even by Walton’s standards. For those unfamiliar, Craig spent 10 years as a Republican congressman from Idaho and then 18 more in the Senate, but didn’t run for re-election in 2008 after he pled guilty to disorderly conduct in a 2007 sex sting in a Minneapolis airport bathroom, and later insisted that he was not gay or soliciting sex from the undercover officer in question, but slid his foot under the neighboring stall due to “a wide stance.” And Walton brought that up on the ESPN2 broadcast of Washington-Gonzaga Wednesday night in response to play-by-play announcer Dave Pasch clarifying that a foul call was thanks to a player’s “wide base.” First, here’s the foul call (which also includes Walton talking about lakes):

And here’s the subsequent Pasch-Walton exchange:

Pasch: “By the way, just to clarify, the reason they called the foul on Dickerson, as Nowell gets the basket, was, they said, an excessive wide base. They said the base was too wide outside the shoulders, so that’s why they called it on Dickerson, because you can’t get around that.”

Walton: “Well, since we’re right next to Idaho, wasn’t it Larry Craig who had the wide stance?”

Pasch: “Jesper with the entry pass, and Norvell!”

That was probably smart of Pasch to just let that one sit. And, of course, this was only one of the many Walton moments on this game. Consider his discussion of Jay-Z around Washington player Nahziah Carter (who, yes, is actually Jay-Z’s nephew):

Walton also had detailed thoughts on the officiating at several points, including “embarrassingly terrible” and “you’ve already called some real cheap fouls”:

He had fun interacting with the student section, too:

And this game ended with quite the sequence of events, with Washington making two late free throws to tie, then Gonzaga getting the game-winner inside the final second:

And that led to quite the “Shine on” commentary from Walton:

So this broadcast had plenty of memorable moments, and many of them were thanks to Walton, who remains as entertaining as ever. Still, it was the Larry Craig reference that really stood out. That’s not something anyone probably expected to hear on ESPN in 2018.