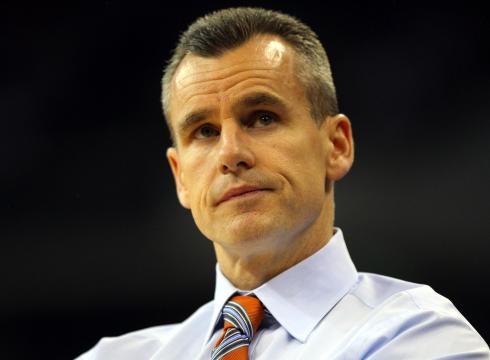 A year ago you were given the best NBA job a college coach has ever received. You left the University of Florida for a five-year contract with the Oklahoma City Thunder. You were entrusted with two superstars: Kevin Durant and Russell Westbrook.

Now, one of them is gone and the other is entering a contract year.

What do you do?

The shockwaves created by Durant joining the Golden State Warriors will be felt in the NBA for years to come. The seismic wave could even trickle down to the college game. Donovan didn’t sign up for this. He didn’t go into the OKC job expecting this team could be on the brink of collapse a year later.

Durant has left the building. Westbrook could bolt next summer. Don’t be surprised if Donovan sprints out the door, too.

All of a sudden Donovan could become the most attractive college coaching option as soon as 2017. Of course, a lot could change over the next year but going back to school has to have crossed Donovan’s mind.

Donovan, 51, knows he’s a great college basketball coach. He has as many national championships as Rick Pitino and Roy Williams. Plus, he did it at a football school with very little track record of basketball success.

Meanwhile, Donovan still doesn’t how good an NBA head coach he is. Was he an actual upgrade over his predecessor Scott Brooks?

Donovan was hired to replace Brooks and with a healthy Durant and Westbrook went 55-27.  That wasn’t as good as Brooks’ record in 2012-13 (60-22) or 2013-14 (59-23). Donovan should be credited for the Thunder upsetting the San Antonio Spurs in the NBA playoffs but he also watched his team blow a 3-1 lead in the conference finals against Golden State.

You can call it nitpicking if you like. Donovan’s first season as an NBA coach should be viewed as a success. But this might be as good as it gets for him in the pros. Next season, if Oklahoma City somehow cobbles together 50 wins with Westbrook leading the way, Donovan will get a ton of credit.

But in the NBA, teams with one superstar have a ceiling and he’ll have virtually no shot at getting to the NBA Finals. Durant did what was in his best interests. Why shouldn’t Donovan? Maybe it’s time to go back to school.

"Can you find out if any of those SEC schools are looking for a basketball coach…" – Billy Donovan to his agent just now, probably…..

Going to the NBA used to be the goal for many college coaches. But with the explosion of television money in college sports, a top college coach can make just as much than your typical NBA coach.  Donovan’s deal with OKC is reportedly worth $30 million over five years. Kentucky coach John Calipari will make over $7 million in 2016-17. That amount is certainly what Donovan would command on the open market if he were available.

In college, it’s easier to be successful. The coach is the CEO. He recruits the players and has ultimate authority. If a recruit doesn’t pan out, they can always transfer or you can bring in a better player. Donovan had more control over his success at Florida because he could out-recruit the competition.

In the NBA, you are limited by the draft, free agency, and a salary cap. The general manager usually has the ultimate authority over personnel. Also in the pros, the power lies with the players, not the coach.

In any given year, only four NBA teams realistically have a chance at a championship and you usually know who they are. There is more parity in college thanks to the plethora of teams and the NCAA Tournament

Where could Donovan land? It’s still a bit early to project what the coaching landscape will look like in the immediate future but here are some possibilities:

UCLA – When it comes to the hot seat, the hottest seat might be for coach Steve Alford. He was a surprise hire to begin with in 2013 and last year’s 15-17 record has the fanbase slightly annoyed. Yes, the Bruins made back-to-back NCAA Sweet 16 appearances in his first two seasons. But hey, this is UCLA. You’re expected to compete for national championships every year.

North Carolina – This job migh not open up for at least a few years. Roy Williams is 65 and recently said his retirement is not imminent. But you have to wonder how much the academic scandal and his health issues have worn on him. Donovan would seem to be a worthy successor, however he has no North Carolina ties and the Tar Heels like to keep things within the family.

Louisville – Again, this job might not open up for a few years. It will definitely seem like a natural fit for Rick Pitino, 63, to have his most successful protégé follow in his footsteps. Louisville certainly has the financial clout to win a bidding war for Donovan’s services. With the NCAA investigation looming over the program, Pitino might choose to retire.

Something to keep in mind…this could make the end of Billy Donovan's NBA career,and his return to college (Louisville?), quicker

Duke – Mike Krzyzewski and his suspiciously dark hair will turn 70 in February. Like his Tobacco Road counterpart, Krzyzewski says he has no plans to retire. Duke will be the preseason No. 1 in 2016-17 and the modern day John Wooden is gunning for his sixth national championship. If Krzyzewski goes out on top, Donovan probably would be the No.1 choice to replace him.

Of course, there is the possibility Donovan stays in the NBA. Perhaps he finds a way to thrive. But one thing is clear: the entire college basketball world will be watching Donovan and the Thunder very closely next season.