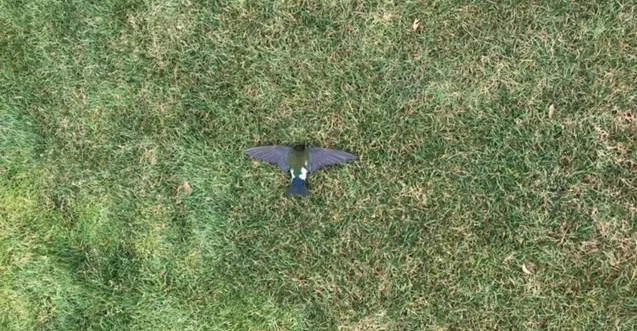 There have been several cases of birds interfering with sporting events over the years, from the dove hit by a Randy Johnson pitch in 2001 to the pigeons that interrupted play at a MLB game in Detroit in 2014 to a number of birds that interfered with a CBS golf interview in 2017. But a particularly notable case of avian interference came in a NCAA men’s golf regional Thursday, with a berth in the NCAA championships on the line. On the third and final day of competition, Ole Miss was up by four shots on LSU for the fifth-place slot and the accompanying berth at nationals, but with Rebels’ golfers Sarut Vongchaisit and Cecil Wegener still on the course. And Vongchaisit (a freshman and team alternate who only tagged in for the regionals thanks to a wrist injury to senior Beau Briggs, and who had posted a -4 finish on Day 1 and a -1 on Day 2) wound up having his round derailed by a bird on the par-5 seventh hole. Here’s more from Bunkie Perkins at SB Nation’s Red Cup Rebellion:

He teed off and the ball hit the fairway but rolled off and into the first cut of fescue grass. When he got to where his ball should have been, he could not find it. No one could find it. So, a one stroke penalty. Hitting three. With his next shot, he hit a bird.

Not a birdie, but an actual fucking bird.

The ball careened off said bird and into the out of bonds area. Another one stroke penalty, now hitting five. Thankfully, nothing else befell poor Sarut the rest of the hole. The earth didn’t open and swallow him up after his 5th shot, he didn’t spontaneously combust after stroke six. A swarm of bees didn’t engulf him on shot seven. A lion did not run out of the trees and maim him on stroke eight, and no service processor handed him a summons as he putted out. But none of that would have been surprising after the bird incident.

Yep, Vongchaisit finished with a nine on that hole. Somehow, though, he managed to finish the round, albeit with a +9, which dropped him from tied for second individually to a 21st-place finish. But that led to Ole Miss having to take Josh Seiple’s +5  score, and they wound up losing to LSU by a single stroke. All thanks to a bird that was just in the wrong place at the wrong time.