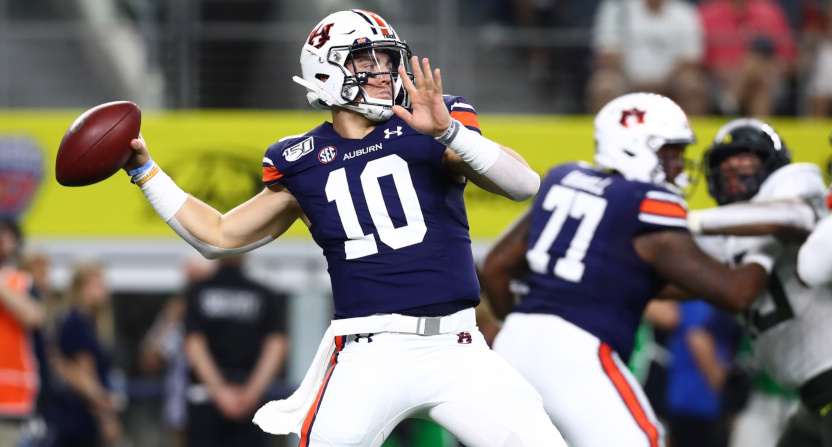 Once upon a time, Auburn was fueled by a dynamic once-in-a-lifetime freshman by the name of Bo Jackson. Now, in 2019, another freshman named Bo is already writing his legacy for the Tigers. Freshman quarterback Bo Nix had a rough evening early in Arlington, Texas Saturday as No. 16 Auburn took on No. 11 Oregon in the biggest game of the day, but he matured before everyone’s eyes and delivered a 27-21 victory with the poise of an upperclassman.

Oregon led Auburn 21-6 midway through the third quarter and it looked as though Oregon was going to get some revenge on the Tigers years after their only other meeting in the 2011 BCS Championship Game at the height of the Chip Kelly era. But the Ducks were once again unable to slam the door shut on the Tigers. Nix brought Auburn within a touchdown and a two-point conversion with an 11-yard touchdown pass later in the third quarter, and the stage was set for some fourth-quarter dramatics.

Auburn pulled within one point midway through the fourth quarter, 21-20, and was putting pressure on Oregon. The Ducks crumbled with an offense that had fallen flat and a highly questionable decision by Oregon head coach Mario Cristobal to go for it on fourth down at the Auburn 41-yard line with 5:30 still to play. Further complicating things for the Ducks was the wasteful use of two timeouts before the fourth-down play, which was stuffed by the hungry Auburn defensive line.

Fortunately for Oregon, the defense held firm and forced a three-and-out. But once again, the Ducks were unable to find any offense to put the game away, whether by tacking on more points or killing off more clock. Oregon punted to Auburn but the 29-yard punt went out at just the Tigers’ 40-yard line. Needing just a field goal for the win, Nix went to work and was not content to put the games in the hands (feet) of the field goal unit.

A fourth-down run by Nix on 4th and three picked up three yards to move the sticks and keep the game going with 1:21 remaining. That was followed by a 3rd & 10 pass for a gain of 13 yards to the Oregon 26-yard line. Finally, even though a field goal would likely win the game for Auburn, Nix tossed a pass to Seth Williams for a 26-yard touchdown with nine seconds left on the clock.

That was certainly a wild finish. But the Ducks were given a chance to steal the win anyway. A penalty for unsportsmanlike conduct was called on Williams for spiking the football, because football officials are unable to allow for any bit of raw emotion in such an emotional sequence. The penalty was tacked on to the kickoff and gave Oregon 15 fewer yards to go for a touchdown.

Daewood Davis returned the ensuing kickoff 49 yards, and nearly found enough room to race to the end zone in the final seconds. Instead, Oregon got one last chance to have Justin Herbert win the game for the Ducks, and he badly overthrew the endzone on the final play of the game.

Now THAT is an emotional win for Auburn. And this was the first game played by the Tigers since the passing of longtime radio voice Rod  Bramblett, who died along with his wife in a car accident this offseason. His voice was likely the only thing missing from this Auburn victory.

The win also helped save some dignity for the SEC in the opening week as a handful of teams around the conference either lost or struggled with their opponent. Had Auburn lost the game, five SEC teams would have suffered a season-opening loss in non-conference action (Missouri, Tennessee, South Carolina and Ole Miss went down in Week 1). But now the Pac-12 is once again the conference looking for some answers.

If Oregon was one of the top playoff candidates from the conference, a win over Auburn would have been nice to have in the pocket. Now, the conference may already be in need of a one-loss conference champion at the end of the season. That is entirely possible, of course, although the margin for error for the Ducks was just dashed. Meanwhile, Auburn still faces a daunting schedule this fall, but the confidence boost this win provides could be huge in Nix’s growth.