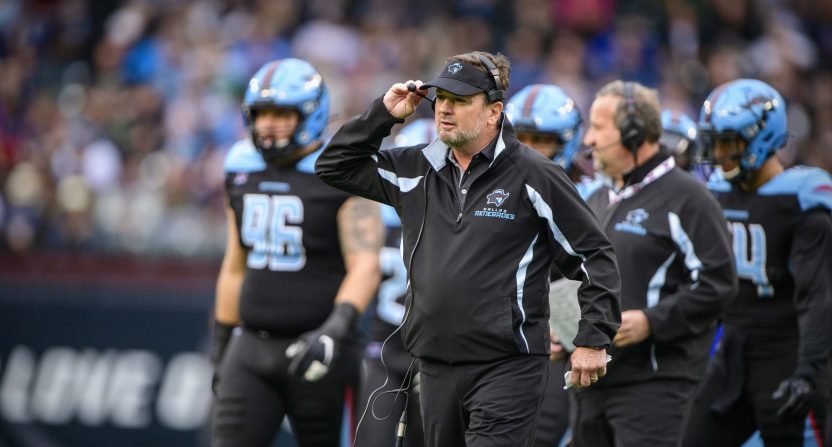 Jacksonville Jaguars coach Urban Meyer is a candidate that a lot of people had some fun with but he shot down any interest on Wednesday (if you actually believe him). Kansas City Chiefs offensive coordinator Eric Bienemy has been floated as well. In the college ranks, people like Cincinnati’s Luke Fickell, Oregon’s Mario Cristobal, and Penn State’s James Franklin have all been floated and have all pretty much shot the idea down.

One potential candidate who has come up is Bob Stoops. The former Oklahoma Sooners head coach retired in 2017 but returned to the sidelines in 2019 to coach the Dallas Renegades of the XFL. Earlier this year he joined Fox’s Bog Noon Kickoff, replacing Meyer. And while all of that might point to the notion that he has left college football coaching behind him, Stoops didn’t necessarily say no when asked about whether or not he’d entertain the USC job while appearing on SiriusXM’s ESPNU Radio on Wednesday.

.@USC_FB is in search of their next Head Coach. Does @CoachBobStoops want the job? He told @DustyDvoracek and @dannykanell his thoughts this morning on ESPNU Radio, Channel 84. pic.twitter.com/oqQOIYE9qZ

“I’m enjoying my opportunity to work with Fox. I love watching my sons — one’s playing and one’s on the sidelines coaching,” Stoops said. “But in life, you just never know whatever fits you just perfectly. And I’m not saying this does. They’re going to go through a list of coaches that are already on the field that probably can’t even talk to them until the season’s over. I didn’t ask for my name to be attached to this, but I can’t help it that it is.”

To be fair, no one is confirming that Stoops is even an actual candidate. However, he is the first public figure not to outright deny interest. There’s also the caveat that he’s the only high-profile candidate who doesn’t currently have a school or franchise that he needs to appease with a denial, so he probably appreciates being able to just speak freely. It’s actually kinda refreshing.

Would Stoops be a good candidate for the job? At 61, some might consider him out of touch with what USC needs right now. Some of his thoughts over the years don’t exactly hold up too well in 2021. But he did go 190-48 in 18 seasons at Oklahoma with a national title to his name. Good luck finding too many other coaches out there with that kind of pedigree.