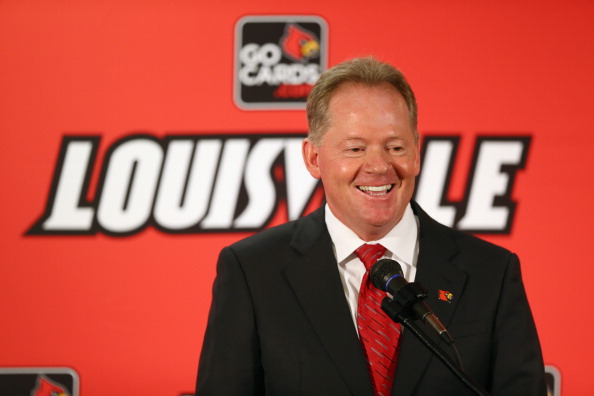 With college coaches now able to like and retweet tweets from recruits, the media is paying a lot closer attention to what big-time coaches are liking on Twitter these days. This turned out to be a bad thing for Louisville football coach Bobby Petrino.

The tweet has been unliked since it was uncovered by Horne and she has been since blocked by Petrino, but this gaffe is part of a long path of strange missteps by Petrino over the past decade. He left his offensive coordinator job in Jacksonville in 2001 without telling then-head coach Tom Coughlin. That was followed up by abrupt exits as head coach with both Louisville and the Atlanta Falcons.

Petrino found success after returning to the college ranks with Arkansas, but topped off his sketchy lifestyle by crashing his motorcycle while riding with a 25-year-old athletic department employee he’d hired who was his secret lover, and asking witnesses not to call 911. Arkansas fired him after the 2011 season and he wound up at Western Kentucky, then returned to Louisville in January 2014.

Though Petrino has managed to stay out of the limelight for the most part during his second stint with the Cardinals, the Internet remembers Petrino’s sketchy past and managed to use it against him.

In fairness to Petrino, it’s really easy to accidentally favorite something that comes through your timeline while you’re on a motorcycle

@LisaHorne @cfb_poindexter The only way Petrino will get a 5 star at Louisville.

We should probably give Petrino the benefit of the doubt on this one. It’s easy to accidentally like something while using Twitter’s mobile apps. Heck, I’ve probably done it before without noticing. However, with Petrino’s past, he may have just gotten his hand caught in the cookie jar once again.

Oh, Bobby Petrino. When will you ever learn?