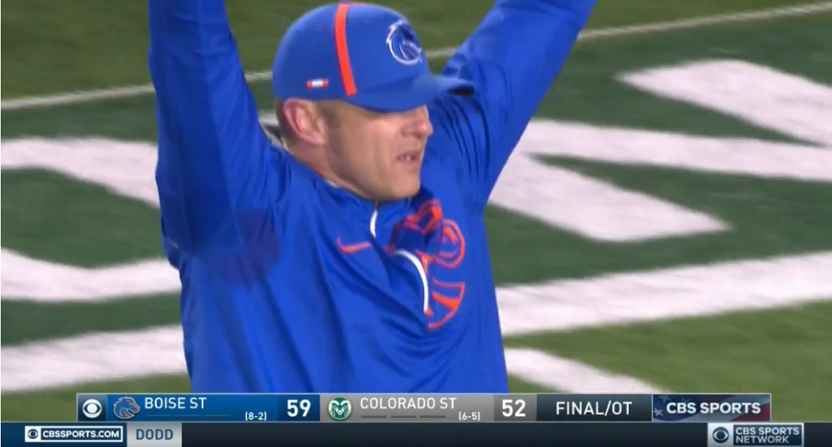 The Boise State Broncos came away with an absurd 59-52 overtime win over Colorado State late on Saturday night in Fort Collins (the game ended around 3 AM ET, or 1 AM MT).

The Rams were in complete control for most of the first half in this Mountain West battle, even taking a 28-3 lead on a touchdown with 11 minutes left in the second quarter. Boise cut the 25-point deficit to 18 points (35-17) going into halftime, and quickly scored two touchdowns to begin the second half. Suddenly, it was just a four-point game with plenty of time left against a porous CSU defense.

But CSU scored a touchdown on this Rashaad Boddie run to go up 52-38 with 3:03 left, and appeared to be in great shape to escape with the victory:

Over a minute later (so, under two minutes left), it was still a 14-point lead, when Boise faced a 2nd-and-13 at the Rams’ 27-yard line. Boise quarterback Brett Rypien threw an incomplete pass, but CSU’s Shun Johnson was called for taunting after making a hit on the intended receiver. It was a questionable call (as is the taunting call always), but still a pretty inexcusable penalty for CSU to draw in this situation. And on the ensuing play, Boise scored a touchdown instead of having 3rd-and-13.

Here’s a look at the sequence:

That was followed by an INCREDIBLE Boise onside kick. Seriously, look at this bounce!

And a few plays later, the Broncos tied it up (after the XP) with this touchdown on a Rypien six-yard pass to Jake Roh:

The 52-52 game went into overtime, and on the first drive, Boise scored a touchdown on a four-yard run from Alexander Mattison:

Then it was CSU’s turn to get the ball, and the Rams had a nice drive working, but Boddie (a freshman running back forced into action due to injuries) fumbled on 3rd-and-2 at the six-yard line to end the game.

So, the Broncos won after being down 25 points in the first half, and 14 points with under two minutes to go. Multiple incredible comebacks for Bryan Harsin’s Boise State squad to get a great road win and move to 6-0 in Mountain West play (8-2 overall).

As for CSU, it’s obviously a brutal, heartbreaking loss. Any hopes the Rams (6-5, 4-3 in MW)  had of being in the Mountain West title game are gone with the loss, and they missed the opportunity for a huge win over a Boise State program they have never beaten.

Third-year CSU head coach Mike Bobo has made some very questionable in-game decisions during the team’s three-game losing streak (like, choosing a field goal over trying for a touchdown on 4th-and-goal at the one-yard line in the second half of this game). This CSU team has too much talent to be getting the results they have been lately in a down year for the Mountain West, and the defense — while it shouldn’t be anywhere near “good” —  is performing as badly as any in the country right now. Don’t be surprised if there are rumors soon of Bobo’s seat getting warm.