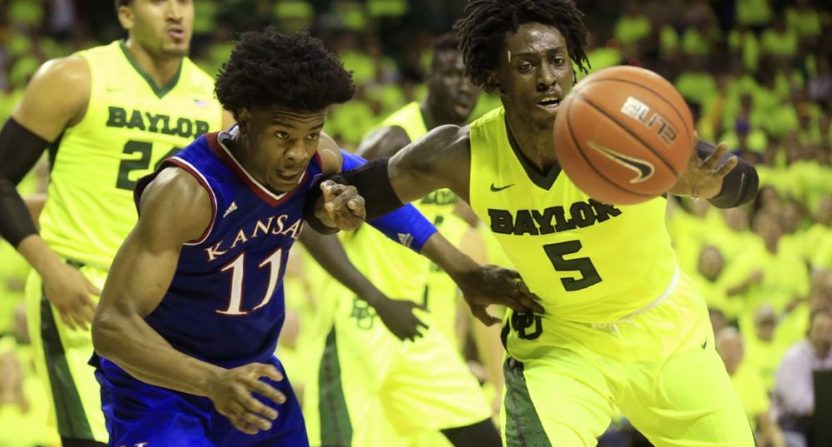 After another wacky weekend shook up the NCAA Tournament bracket, a light slate on Monday still provided some big bubble games with Miami earning a quality win at Virginia and Iowa State avoiding a bad loss at Texas Tech. So let’s take a look at how the field shapes up entering Tuesday.

The bracket holds 32 automatic bids for conference champions (noted below with italics), and the remaining 36 are at-large selections.

Teams are evaluated by how they have performed to this point in the season without projecting how they will perform the rest of the year.

Here’s the full field of 68 through results of Feb. 20 with some notes on the bracket below.

** Baylor is still a No. 1 seed despite losing at home to Kansas, but there is not much separation between them and UNC (2 seed, East). Although North Carolina has more RPI Top 50 wins, Baylor’s two best wins — Louisville on a neutral and Oregon at home — are better than the Tar Heels’ best victory — at home against Florida State.

** The ACC essentially has seven bids locked up already with Miami (8 seed, South) beating Virginia on the road Monday. For some perspective, no other league has more than 7 bids right now, and that includes bubble teams. The ACC has 10 total teams in the field with three more among the first nine out.

** New faces in the bracket! We all know about Northwestern’s (7 seed, Midwest) NCAA Tournament-less history, but North Dakota (16 seed, South) is looking for its first bid after moving to Division I in 2009. At 12-3, the Fighting Hawks lead the Big Sky by half a game.

** The mid-major world caught a break as Illinois State (second team out) survived two one-possession games last week to stay on the bubble. With no other chances for quality wins, the Redbirds will need teams ahead of them to lose (and there’s a good chance that will happen). With the bubble growing weaker and weaker, I’m feeling confident they will make the at-large field if their only other loss comes to Wichita State in the MVC championship game.

** Who saw Vanderbilt (fifth team out) making its way onto the bubble? The Commodores are just 14-13, but unbelievably that’s OK with this year’s weak field. They’ve won three of their last four, picking up quality wins against South Carolina and Arkansas during that stretch. They’ll need to beat at least one of Kentucky or Florida next week to remain a serious contender for a bid.