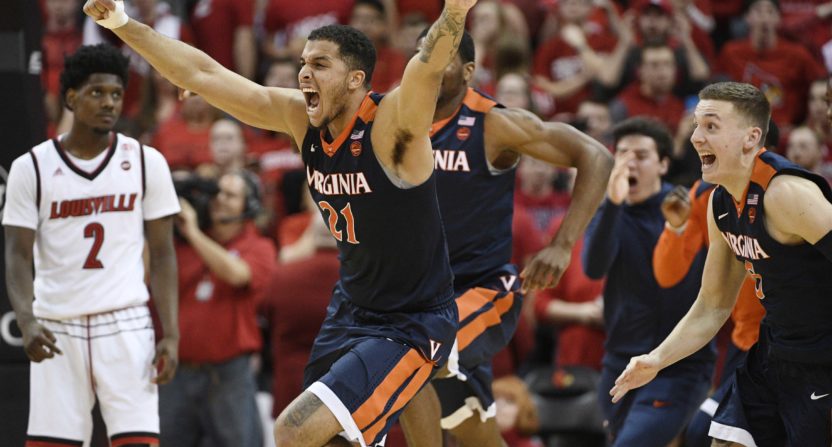 By Saturday night, we’ll have crowned our first automatic qualifier to the 2018 NCAA Tournament. The Madness is already in full swing after Virginia’s insanely improbable comeback Thursday at Louisville, and Rutgers’ ongoing run to the Big Ten quarterfinals.

So yeah, things are getting wonky.

Before we get into the bracket, here are some quick reminders. The bracket holds 32 automatic bids for conference champions (noted with italics), and the remaining 36 are at-large selections.

For our purposes, teams are evaluated by how they have performed to this point in the season without projecting how they will perform the rest of the year. Conference champions have been selected using No. 1 seeds for conference tournaments beginning this week (or the highest remaining seed), and using KenPom projections for No. 1 seeds in tournaments that begin next week.

Now, here’s the full field of 68 through results of March 1 with analysis on the bracket and the bubble below: 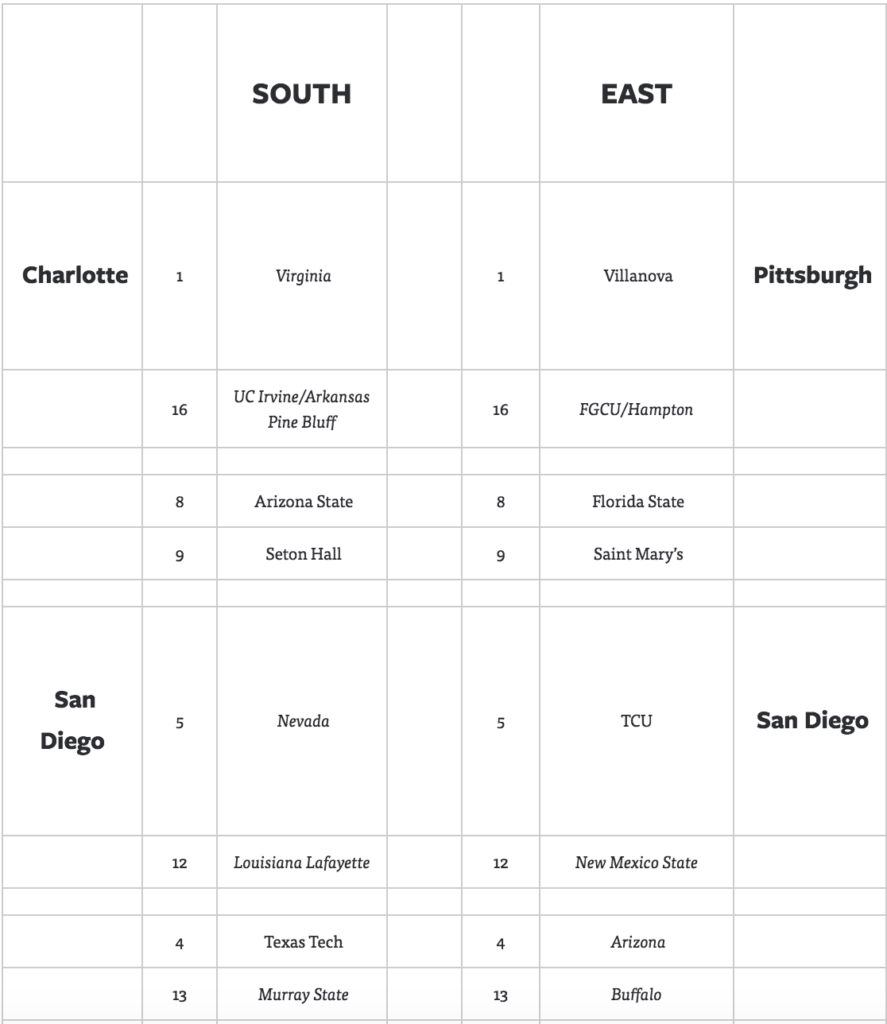 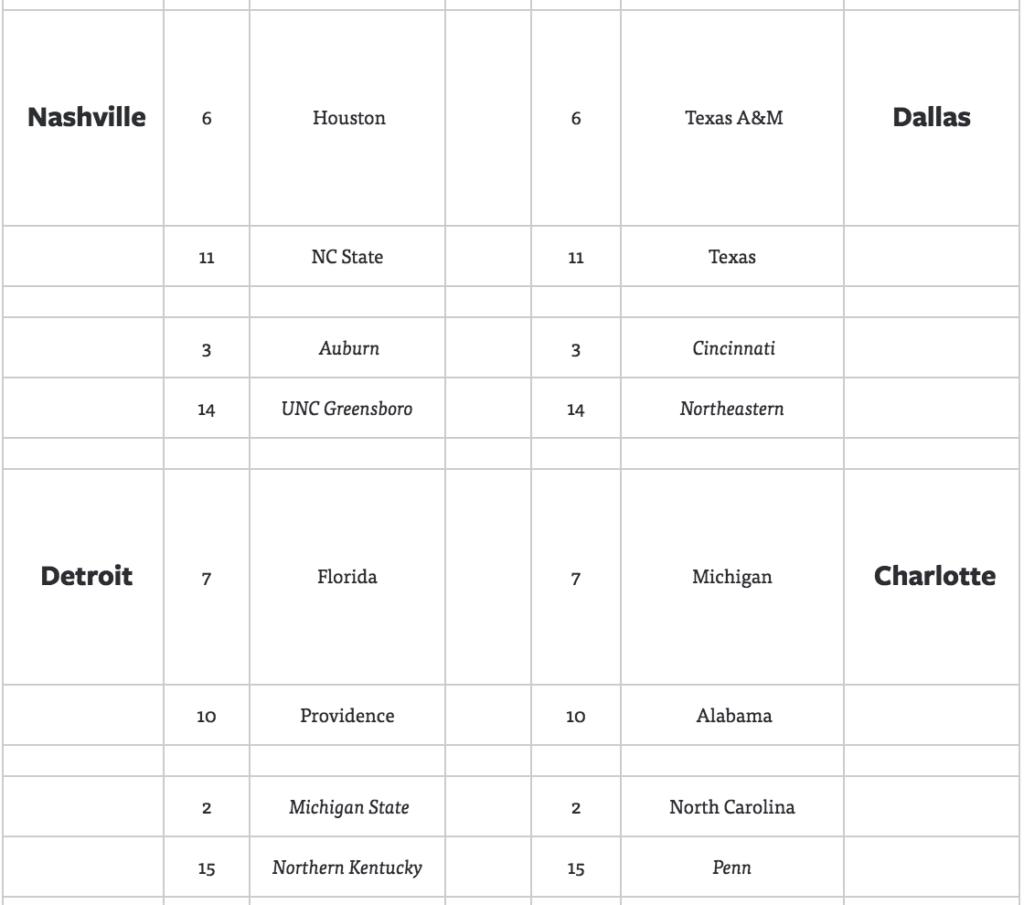 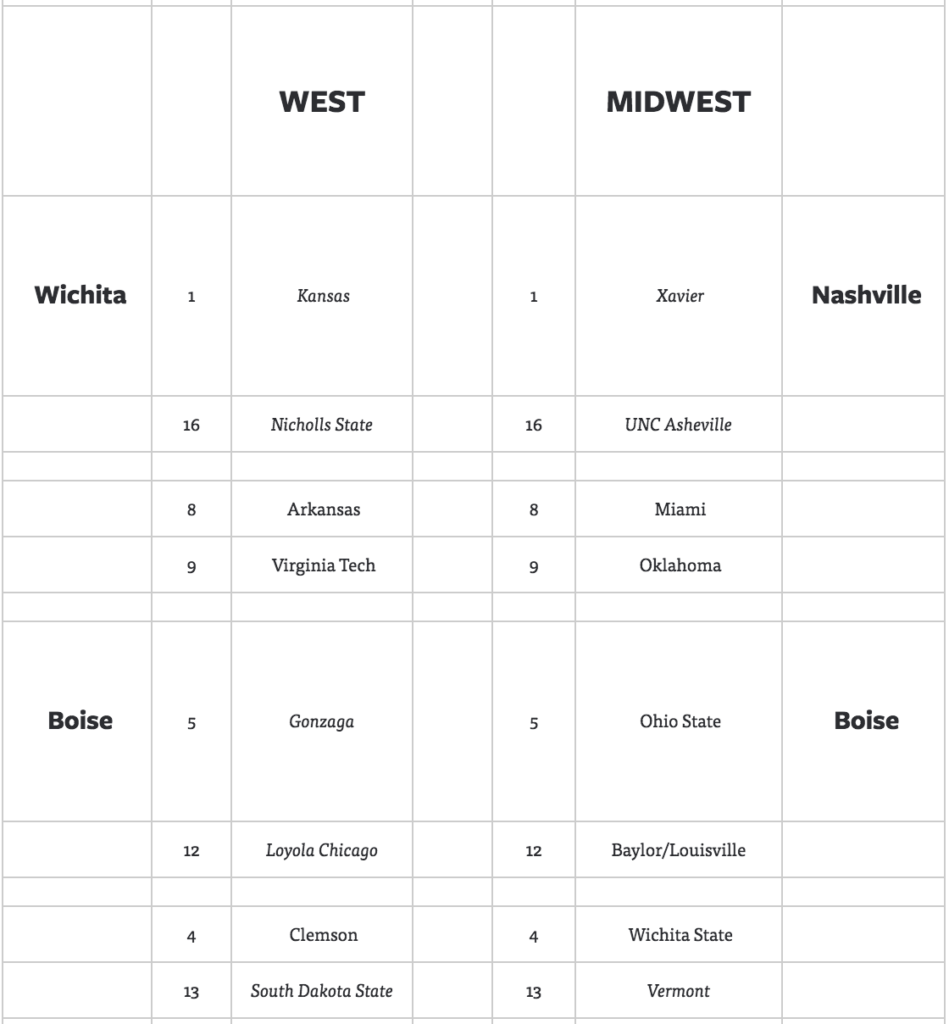 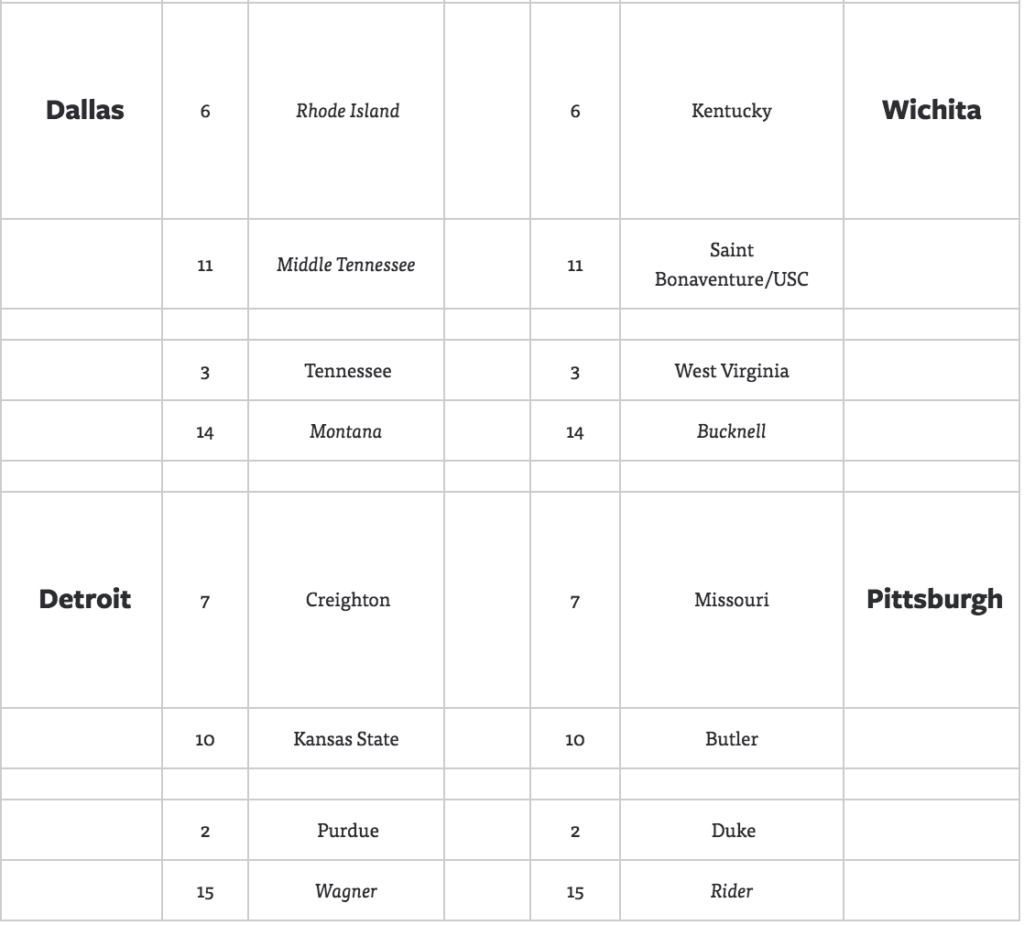 ** We have our first conference championship games this weekend. The OVC Finals are Sunday night, and four leagues — the Big South, MVC, Atlantic Sun and Big Ten — will determine their autobids Sunday.

The MVC and Big Ten tournaments are particularly interesting. In the MVC, can Loyola Chicago (No. 12 seed, West) secure a berth, or will they be the newest controversial mid-major snub/inclusion? In the Big Ten, can Nebraska (seventh team out) get two quality wins over Michigan and Michigan State? Or what will happen if Michigan State (No. 2 seed, South) wins it all? The Spartans still won’t have a breadth of quality wins on their resume, but it’s hard to imagine a 31-3 high-major team that won its regular season and conference tournament championships not earning a No. 1 seed.

** Speaking of those No. 1 seeds… who’s still in the hunt? Obviously, the current four: Virginia, Villanova, Xavier, and Kansas. If either North Carolina (No. 2 seed, East) or Duke (No. 2 seed, Midwest) wins the ACC, that champion would have a good chance. Same goes for Michigan State or Purdue (No. 2 seed, West) in the Big Ten. Lastly, Auburn or Tennessee could sneak onto the top line, but either one would need a lot of help (i.e. the aforementioned No. 1 seed contenders getting upset in their conference tournaments) in addition to winning Saturday and the SEC Tournament title.

Maybe the biggest sleeper? Wichita State (No. 4 seed, Midwest). The Shockers are now 15-4 against Quads 1 and 2, and they host Cincinnati this weekend.

** It’s hard to imagine a scenario where Virginia is not the overall No. 1 seed. The Cavaliers have far and away the best resume with a 9-1 record against Quadrant 1, including wins away from home against Duke, Rhode Island and Miami. Even if they lost to Notre Dame on Saturday and then lost their first ACC Tournament game, their resume would still be better than Villanova’s, which includes a home loss to St. John’s.

** The bubble is shrinking. Barring big NCAA Tournament runs by the teams in Shouting Distance, the bubble comes down to 14 teams for nine bids (and up to 16 teams for 11 bids should Loyola Chicago and Middle Tennessee lose in their respective conference tournaments) with 10 days to go. Aside from Butler, all the No. 10, No. 11 and No. 12 seed at-large teams are not safe yet.

** You may be wondering why Oklahoma (No. 9 seed, Midwest) is still a single-digit seed after losing 10 of its last 13 games. This comes down to one of the committee’s favorite phrases: body of work. Thanks to having won six Quadrant 1 games before the end of January, the Sooners still have an overall solid resume despite an abysmal February. They’re 6-9 against Q1 with no losses to Q3 and Q4. They’re a lock, but a loss Friday at home to Iowa State could make them a candidate for Dayton.

** Kansas State (No. 10 seed, West) and Baylor (No. 12 seed, Midwest) meet in Manhattan on Saturday afternoon. The winner of this game will be feeling pretty good while the loser will face pressure to win a game or two in the Big 12 Tournament.