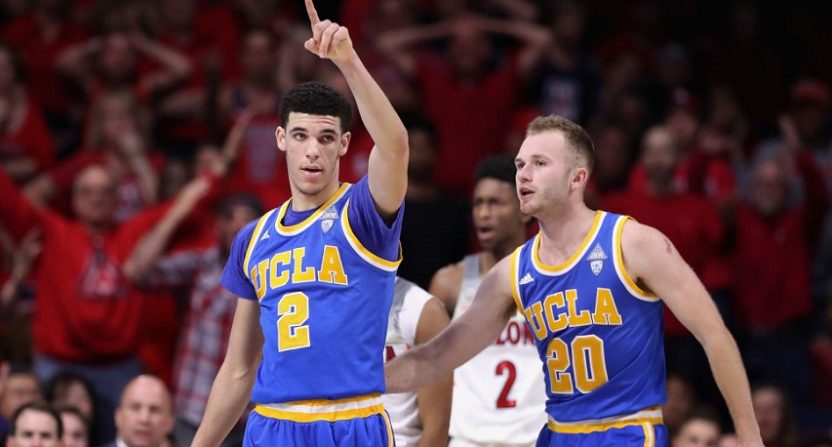 We nearly had a potentially big shake-up in the bracket Monday night as Oklahoma took Kansas to the wire, but the Jayhawks made my job a bit easier by coming back to secure a win and keep their No. 1 seed in the Midwest. Meanwhile, North Carolina rose to a No. 1 seed in the South despite Monday’s loss to Virginia, thanks to Baylor falling to Iowa State over the weekend.

So now it’s time to take a look at how the full bracket is shaping up entering Tuesday’s slate. The bracket holds 32 automatic bids for conference champions (noted below with italics), and the remaining 36 are at-large selections.

Teams are evaluated by how they have performed to this point in the season without projecting how they will perform the rest of the year.

For leagues that have begun their conference tournament or at least have the bracket set, I am using the highest remaining seed as the automatic qualifier.

Here’s the full field of 68 through results of Feb. 27 with some notes on the bracket below.

** The Pac-12 is shaping up as the opposite of the Big Ten. Between Oregon (2 seed, West), UCLA (2 seed, East) and Arizona (3 seed, Midwest), the conference has three of the top nine teams on my 1-68 seed list. Meanwhile, USC and Cal are the league’s only other teams in the field. The Trojans are dropping rapidly amid a four-game losing streak, and the Golden Bears are barely hanging on to a spot in the First Four.

** We’ll see what happens during the final week of the regular season, but if Oregon, UCLA and Arizona win out as expected and then one of them wins the Pac-12 Tournament, I’d bet my money on the winner being a No. 1 seed.

** On the other end, the Big Ten still has no one on among the top four seeds but has seven total bids, which is tied with the Big East and trails only the ACC. Northwestern still has some wiggle room and could feasibly lose out while making the field, but the Wildcats need at least one more win to avoid sweating on Selection Sunday. With Michigan and Michigan State playing great basketball recently, the Big Ten is looking good for at least six bids.

** Speaking of the Big Ten, John Groce has somehow brought Illinois (third team out) back to the bubble. The Illini have won four of their last five games with a sweep of Northwestern during that stretch. They’ve still got work to do with games against Michigan State and Rutgers to finish the regular season, but their top 15 strength of schedule will get them in the conversation despite a mediocre record.

** 2-bid Valley? We’ll see if it holds up through the next two weeks, but right now I’ve got both Illinois State and Wichita State in the at-large field. (ISU is currently in as the automatic bid, but they are high enough on my 1-68 seed list to be in Dayton if they were an at-large.) If both teams reach the MVC finals and one loses to the other, I think they make the tournament. If one of them loses before the finals? Then things get more dicey, but a bid wouldn’t be out of the question, either.

**Here’s a fun storyline. In his first year at Vanderbilt, Bryce Drew has brought the Commodores to the brink of an at-large bid with four straight wins and an 8-3 record in their last 11 games. The kicker? He narrowly missed the NCAA Tournament with Valparaiso last season, and Vanderbilt was one of the teams that edged Drew out for a spot in the First Four.