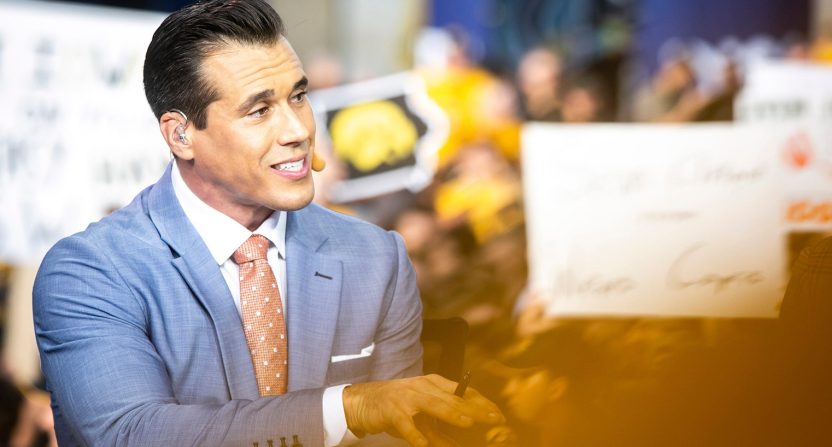 When the news broke that Brian Kelly would be leaving Notre Dame to become the new coach at LSU, former Notre Dame quarterback Brady Quinn had some strong words about the decision.

“You know, I think the first thing that comes to mind is why?” asked Quinn. “What would entice you to go to LSU? Considering (Notre Dame) very well could find themselves, depending on how things play out this Saturday, in the College Football Playoff playing for a national championship…I mean, let’s not get this twisted, LSU is desperate. They already made it very well aware they wanted Lincoln Riley. They tried to swing for the fences with some names, but nothing really came through.”

Quinn, who now works as a CBS Sports and Fox Sports football analyst, has become a go-to voice for the concerns of Fighting Irish insiders. And now, Quinn has offered up the two coaches he has at the top of his list when it comes to who should replace Kelly. Neither should come as much of a surprise to anyone.

“(Cincinnati head coach) Luke Fickell and (Iowa State head coach) Matt Campbell would be at the top of the list,” Quinn said on CBS Sports HQ. “You know, Luke Fickell makes a lot of sense. The problem is, is they’ll be playing in the College Football Playoff right now. And so, how does this whole thing orchestrate itself out? …I mean, you can legitimately have a scenario where, you know, Cincinnati and Notre Dame are playing off in a College Football Playoff, if chaos happens this weekend. And you can be looking at the guy that they’re trying to get as their next head coach. I mean, there’s just so much awkwardness to it.”

Fickell made a classic non-denial denial earlier in the week when asked about Notre Dame speculation. As Quinn points out, Fickell is trying to coach Cincy into the College Football Playoff and, if they make it, it’s hard to imagine he’d leave before that plays out. Would Notre Dame be willing to wait that long and risk not getting him?

As for Campbell, he’s been something on an enigma as rumors have swirled around him. The Iowa State coach might be a top candidate for the Oklahoma job. However, it’s been said that Notre Dame is on the very small list of places he’d consider leaving Ames for.

It’s hard to know if and when we’ll know more about who is taking the Notre Dame job and whether or not Fickell and Campbell will stand pat following their success at smaller schools. The odds are good at least one of them will seriously consider an offer.