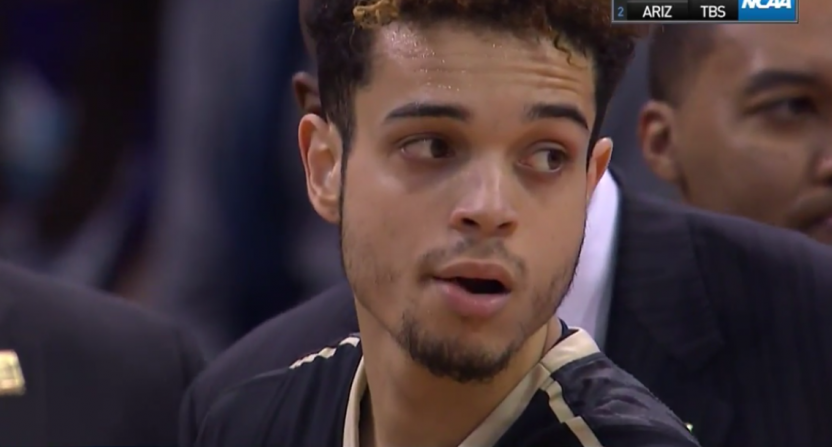 Northwestern’s first NCAA tournament appearance in history has already been one to remember, with their 68-66 first-round win over Vanderbilt Thursday coming thanks to one of the more bizarre fouls you’ll ever see. The Wildcats did well early on, leading 34-27 at the half and 49-34 with less than 14 minutes to go, but the Commodores mounted a ferocious comeback led by Matthew Fisher-Davis (who finished with a team-high 22 points despite coming off the bench), and they took a 66-65 lead with 17.8 seconds left on a Riley LaChance layup. However, Fisher-Davis then made a huge mistake, fouling Northwestern’s Bryant McIntosh as he brought the ball up the floor:

As Vanderbilt didn’t have a foul to give, that let McIntosh go to the line, where he made two free throws to put the Wildcats back in the lead. The Commodores then had another chance, but they couldn’t get the ball inside and settled for a three-point attempt from LaChance with seven seconds left; that missed, and Northwestern got the ball after it went out of bounds. The camera shots there included closeups of a distraught-seeming Fisher-Davis:

A further Vanderbilt foul after Northwestern inbounded led to Sanjay Lumpkin missing and then making a shot, boosting the Wildcats’ lead to 68-66. and then a Fisher-Davis long-range heave at the buzzer missing:

If that final Fisher-Davis shot had gone in, he’d probably be feeling a lot better about himself right now. It didn’t, though, and that means that his unnecessary foul stood as the crucial play. As TBS studio analyst Charles Barkley later said, it was a true brain-freeze moment under pressure:

This is a tough one for Fisher-Davis, as he played so well throughout the game. His 22 points were by far the highest on the Vanderbilt side (Luke Kornet was second with 14), and he was key in sparking the comeback that gave the Commodores a chance to win. However, it’s the big moments near the end that most remember, and his unnecessary foul here is going to be long-remembered.

This is also just the latest twist in a very weird season for Fisher-Davis. The junior guard was benched three times this season, most recently in February where he was held out of a trip to Arkansas thanks to “a violation of athletic department policy.” He led Vanderbilt in scoring with 15.6 points per game at that point. Fisher-Davis has been a key contributor for the Commodores all year, whether in the starting lineup or off the bench, and things seemed to have been going well for him since his return from that last disciplinary action, but this was a tough way for it to end.

Of course, we don’t know that the result would have changed without this foul from Fisher-Davis. Northwestern might have found a way to win anyway, as they still had time for a shot. Still, the Fisher-Davis foul took the pressure off the Wildcats and put it on the Commodores. Unfortunately for them, and for him, that didn’t end well.