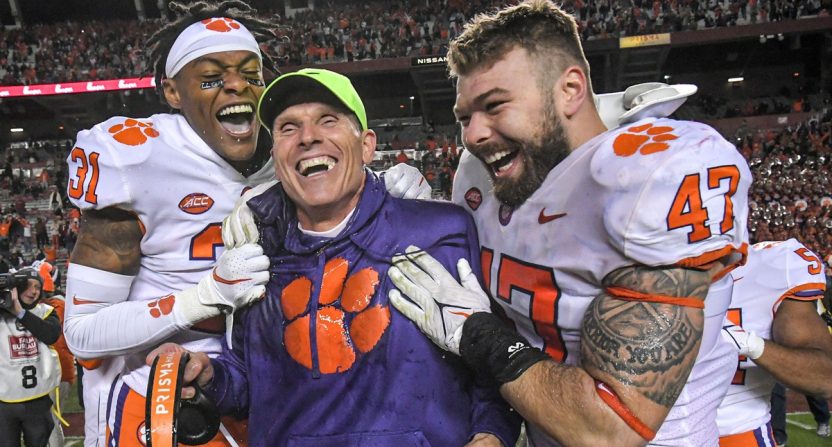 As the coaching carousel has started spinning furiously in recent weeks, one name that has been floated out there a bunch is Clemson Tigers defensive coordinator Brent Venables.

A longtime assistant with the Oklahoma Sooners, Venables made his mark as DC for Clemson where he’s overseen two national champion defenses. After five seasons there, it’s long been assumed that he’d make a solid head coaching hire for someone soon.

That time appears to be now and The Athletic’s Bruce Feldman is reporting that Oklahoma is looking to lock Venables up as their new head coach to replace Lincoln Riley, who left to become the head coach at USC.

SOURCE: OU brass is en route to Clemson and working to finalize a deal to make Tigers DC Brent Venables the next head coach at Oklahoma.

That report was confirmed by ESPN’s Chris Low.

It seems like a no-brainer for Oklahoma as Venables, a Kansas native, has strong Sooner roots and understands the program as well as any candidate. He’s also someone that many of the OU players have been saying they’d like to see take over.

As news of the potential match hit social media, there were lots of strong opinions about the potential move, including how it impacts potential candidate Kliff Kingsbury.

The Kliff Kingsbury to OU story may soon come to an end. https://t.co/el1LBw9loJ

Great decision and pick up for OU https://t.co/jHhKFkY2ew

This is a good hire for OU. Gives them a foot in the door in the SEC considering Venables has been in the conference for the last several years. https://t.co/LtUuQ4GfRr

Venables and Lebby? This would be huge in more ways than one. Obviously #Sooner nation loves BV. But when you add Lebby’s explosive offense and recruiting ability in #Sec country it’s hard to think of a better combination. If true @soonerad as expected hit his home run. https://t.co/QvdXH72PaD

We’ll see if the reports come true and if so, expect to see Venables introduced as Oklahoma’s new head coach in the days ahead. It will certainly be interesting to see how he fills out his coaching staff and who Dabo Swinney hires to replace him in Clemson.