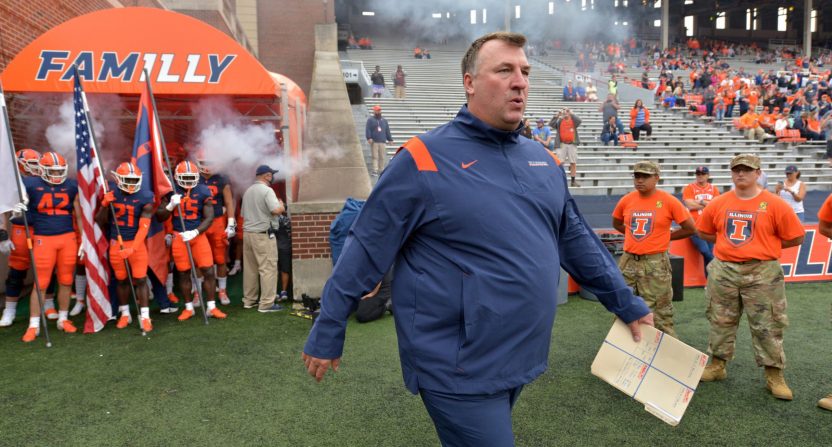 Bret Bielema certainly knows how important it is to have good players when you’re competing at the highest levels of college football. He made his mark as head coach at Wisconsin, where he went 68-24 in seven seasons and took the Badgers to three Rose Bowls. His stint at Arkansas didn’t go as well as he went 29-34 in five seasons.

Now that he’s in his first season as the head coach at Illinois, he’s hoping to get back to the heights he reached with Wisconsin. However, it’s going to take some time. The Illini are 2-5 and still have Penn State and Iowa ahead on the schedule and Bielema is going to have to recruit hard to improve the talent in order to compete with the rest of the Big Ten.

However, while that might be a simple truth, pretty much everyone knows that a head coach should never throw his current players under the bus because they might not be able to win many games. That’s just not constructive motivation and it certainly isn’t inspiring to them or future players. But that’s what Bielema did in a recent press conference,

Exactly what NOT to do as a College HC in front of the media. This is a conversation for Coaches, Admin and Boosters maybe. You don’t throw kids under the bus like this. What a 🤡 pic.twitter.com/pA886wDJXj

“I just know this, as a head coach you’re only as good as your roster,” Bielema said. “I kind of learned that the first time I went to the Kentucky Derby, right? Nobody was betting on the jockeys. Everybody was betting on the horses, so to win the derby you gotta have the right horse, and I think our players are gonna be a reflection of what our program stands for.”

“In particular the offensive line, I don’t believe we have a player in the two-deep [second stringers] that [previous coaching staffs] have recruited here over the last three years that is really significantly doing anything for us in the playing department, and that’s a major concern. That’s something that we have to do.”

Maybe that’s a conversation to have in private but publicly comparing your players to horses and saying that they aren’t good enough to properly represent the program just feels wrong on every level, especially when they’re guys you didn’t recruit.

Plenty of media members called out Bielema over the comments and wondered how he thinks they’d actually be helpful.

This is cringe worthy from Bielema. You can think this but you can't say this. Way to inspire the troops and lead… https://t.co/RQFKNIZIN0

Why would anyone want to play for Bret Bielema after hearing this? Major yikes. https://t.co/bBTXCPv6pM

Bret Bielema doing his best Mike Leach impersonation. Blame the kids and throw them under the bus publicly.

Everybody knows Illinois doesn’t have Ohio States roster. But talking about kids who didn’t recruit themselves like this PUBLICLY is gross.

You have to wonder how inspired Illinois’ players will be this weekend when they travel to Happy Valley to take on No. 7 Penn State. It could get ugly and that includes what players might have to say about Bielema’s comments.