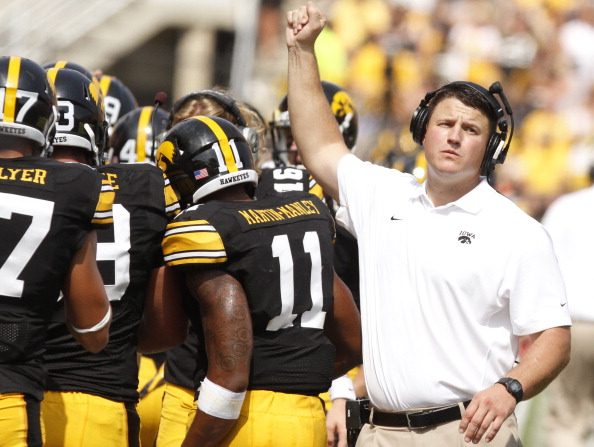 It seems as though Iowa assistant coach Brian Ferentz has a few grievances to share in Big Ten country. The son of head coach Kirk Ferentz did not hold back with his criticisms of rival Big Ten programs over a few issues regarding the NFL Draft and recruiting.

On the topic of recruiting, Ferentz appeared to have a problem with the way Minnesota and in-state rival from the Big 12 Iowa State do their business. In responding to a question about new coaching staffs in the region, Ferentz criticized both schools for offering an exorbitant amount of scholarship offers.

If there is one thing Fleck has managed to do during his time at Western Michigan, was improve the recruiting and provide juice to the program. In his early going at Minnesota, he appears to be following the same strategy, with a few more resources at his disposal compared to his run at Western Michigan. Fleck has gone all out in the recruiting efforts and has been extending offers at every opportunity, but Minnesota’s numbers are not too far off from what many power conference programs leave out there.

For example, Michigan reportedly has 204 offers to recruits. Ohio State has 140 offers. Rutgers has 263. Purdue has 179. Iowa? The Hawkeyes have extended 93 offers. Is Ferentz poking a stick in the wrong place, or is Iowa just behind the curve when it comes to recruiting? Ferentz says a scholarship offer from Iowa just means more (apologies to the SEC for that turn of phrase).

“I can tell you this much, if the University of Iowa offers you a scholarship and you commit to us, we intend to sign you and we intend to take your commitment,” Ferentz said. “I think you have to look no further than in-state to see there were a lot of offers that went out in the 2018 class very early out of Ames. And I’m not sure all of those guys were able to commit to them if they wanted to, because some of those guys have since gone other places.”

Ferentz also boasted about Iowa’s ability to develop players for the NFL. He did so by taking some somewhat subtle shots at Nebraska.

“We recruit against a couple schools that talk about their pipeline,” Ferentz said. “I’m thinking of one a little bit west of Omaha that talks about their pipeline. I think they’ve had like two guys drafted in two years, so I’m not sure how much of the pipeline the coaches have contributed to. But perception is reality in recruiting, so you work against that a little bit.”

Both Iowa and Nebraska have had five players drafted in the last two drafts, so Ferentz trying to knock down Nebraska with his comments comes out a bit weak here.

Then again, coaches should take every opportunity given to pump up their program while tearing down others. Negative recruiting is a fair game, and Ferentz is just doing his part to help out the Iowa Hawkeyes as competition appears to be on the rise.