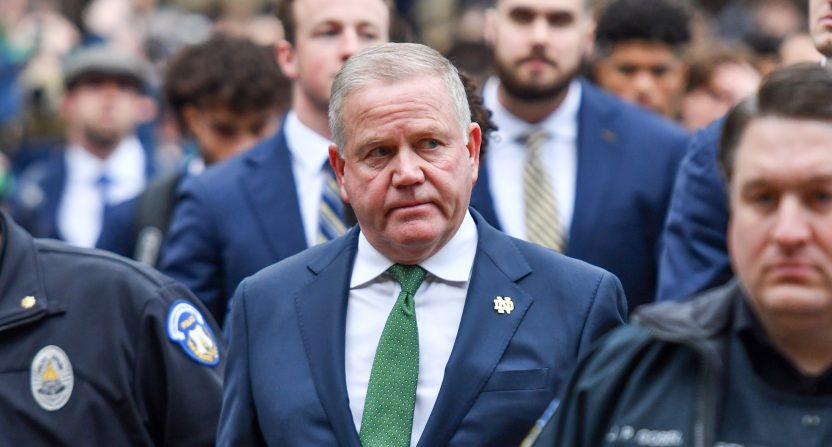 College football fans were agog to learn that Brian Kelly is leaving Notre Dame to become the new LSU Tigers head coach. And that was before they found out how much he was going to make.

According to Dennis Dodd, Kelly’s salary in Baton Rouge is expected to be in the $15 million/year range. To put that in perspective, not only would he be the highest-paid coach in college football, but he’d be making almost as much as Bill Belichick, the guy who has won six Super Bowls.

If true, Brian Kelly becomes the 2nd highest paid coach in all of U.S. sports only behind Bill Belichick. https://t.co/XdogFxxOde

We’ll have to wait and see how the specific numbers shake out, and there are likely to be plenty of details and bonuses worked in as well. But in the meantime, college football media members and fans were blown away by the way the contract numbers are skyrocketing and what all of this means in an “amateur” sport.

Gotta figure out a new word for bag because it’s not apt anymore for this cycle. FIFTEEN MILLION PER YEAR TO COACH COLLEGE FOOTBALL https://t.co/XLp4ZwYqqI

There is no planet in which a college football coach should make $15 million/year. https://t.co/jyC5n4ocuH

Notre Dame, if you will, didn’t have a prayer. https://t.co/mrSEEpLNac

To say that people are completely stunned by the extravagant number for a guy who hasn’t even won a national title would be an understatement. Kelly has done a great job leading the Irish to an 11-1 record this season and a 92-39 record in 10 years. But his teams have often fallen way short when it matters most. Given that the LSU job is open because they wanted to get rid of the guy who led them to a national title two seasons ago, can Kelly truly justify that contract and meet the sky-high expectations in place?

We’ll find out soon enough. Welcome to the SEC, Brian. You got the bag, but you better get the wins too.