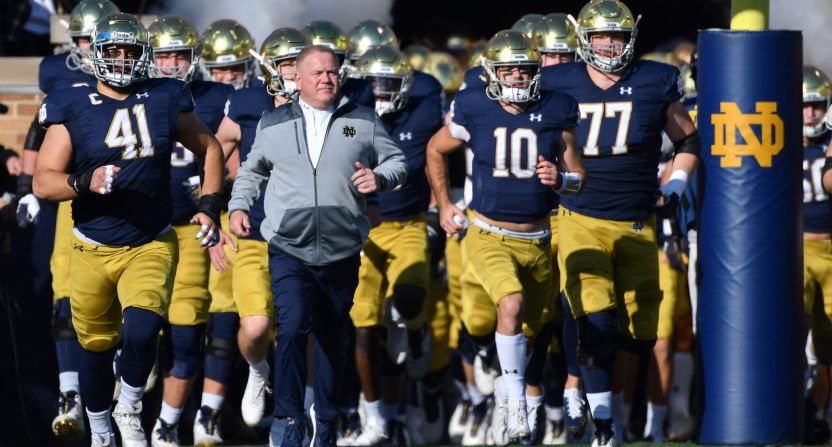 Kelly informed the players after news broke with a group text and also said there would be a team meeting the next morning at 7:00 a.m. The idea of getting up that early to be told Kelly was leaving sounds unpleasant, but it ended up being the kind of thing that just could have been an email when it was reported that the coach met with the team for a total of 11 minutes.

Heard Brian Kelly met with the Notre Dame team for 11 minutes this morning and then left.

You had to figure that video of the meeting would leak eventually and so it has, being shared on Twitter by Barstool Chief (Ryan Brandell). Turns out, while the meeting itself might have lasted 11 minutes, Kelly’s time with the team lasted a mere four minutes. You can watch it below or read the transcript of Kelly’s words to his now-former team after that.

This is it. A 4 min total video pic.twitter.com/a0Lh5O0Uk2

“Good morning guys, thanks for getting up here in short order, short notice,” said Kelly. “As you know I sent out a text last night trying to give you as much notice as possible given the circumstances that we all know that happened due to social media.

“I know we’ve been through this together. I recruited virtually everybody in this room. And I want to be able to tell you face-to-face why we’re at where we’re at. And that is, very simply that um, the past 12 years have been the most incredible 12 years of my life for me and my family being here at Notre Dame. Magical in what we’ve been able to build with the most incredible student-athletes – the ones that I’m looking at right now.

“And so, people are always looking for a reason or something to blame, but there was nothing here but first-class in everything that Notre Dame has done for me and my family. I saw my time here as a blessing working with incredible men on a day-to-day basis. But there comes a time where you look in your life for another opportunity, and I felt it was the time in my life for another challenge.

“And I saw that opportunity in a very short window and felt that it was best for me and my family to pursue a challenge. And so there’s no one to blame, there’s nobody that’s at fault, nobody did anything wrong. You guys have been the backbone of this program with what you’ve accomplished and you’ll continue to do that. I think you’re one of the four best teams in the country. Jack is going to get somebody that will continue to lead this program in incredible fashion. I don’t know what it holds for us moving forward, but I hope to heck it means you’re playing for the national championship because you absolutely deserve it.

“So from the bottom of my heart, I want to thank everyone one of you for giving me this opportunity to speak to you directly because you don’t get that chance very often, and to thank you for allowing me to pursue what I love to do, and that’s developing 18–21-year-olds. And you will continue to achieve the highest level and have great success, no matter what moves forward for you.

“So again, thank you, I love each and every one of you, and for me more than anything else, it’s a sad day but one where I know that each one of you are going to do great things and you’ve got more to accomplish. So, I wish everybody here the very best and thank you for the opportunity you’ve given me and my family. Thank you guys, appreciate it.”

Everyone is going to make up their own mind about how Kelly handled things. They look at the amount of time he spent with the team in this meeting and think he’s heartless. But compared to many of his contemporaries, taking the time to meet with them and give them positive words is a step up. Of course, Kelly also posited most of this in terms of him and his family, and not in terms of how it impacts the players, so that’s not ideal either.

Kelly is making the rounds right now and he’ll likely be asked about the content of the meeting. We’ll make updates as they happen. It’s also a good reminder that it’s pretty impossible to keep internal things internal, especially in situations like this.

[Barstool Chief, transcription via The Spun]