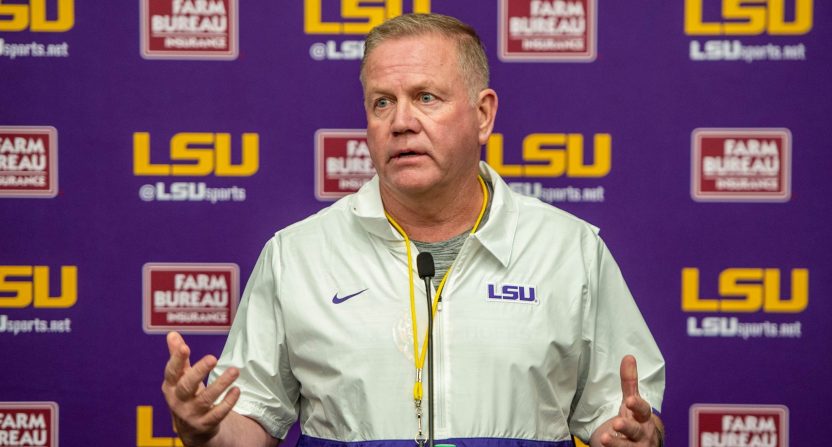 When a college football coach is fired, there’s the old joke about how the administration will look for the exact opposite in his replacement. Mission accomplished, LSU.

If Ed Orgeron was the most Cajun coach in Tigers‘ history, then Brian Kelly might be the least Cajun. Kelly was born and raised in Massachusetts and spent most of his coaching career in the Midwest. He had zero connections to the university, state, or region before being hired by LSU last winter.

The most interesting man in the Southeastern Conference will kick off SEC Media Days on Monday. He’ll be the first of three coaches speaking in the afternoon, along with Ole Miss Rebels‘ Lane Kiffin and the Missouri Tigers‘ Eliah Drinkwitz.

Kelly’s surprise move from Notre Dame to LSU was a bigger stunner than Lincoln Riley bolting Oklahoma for USC. Personality-wise, he’s an odd fit. And predictably, we’ve already seen some strange moments as he’s tried assimilating into SEC culture. There was that weird accent, weird videos with recruits, and a weird interaction when he offended a 6-foot-5, 280-pound man nicknamed “Bull.”

The season hasn’t even started and many people are already delighting in Kelly’s missteps. Imagine what the chortling will be like if he gets off to a slow start. But this is a 10-year, $100 million investment by a tradition-rich and financially rich program. Chances are it will pay off.

Kelly’s departure was shocking because Notre Dame coaches aren’t supposed to leave for another college job. However, in hindsight, it made a lot of sense. Kelly is 60 years old. He took a better job that paid him more with a clearer path to the College Football Playoff. He won’t be burdened by Notre Dame’s limitations, including the academic requirements.

This was a no-brainer move for Kelly. As much as Notre Dame likes to sell its pomp and pageantry, Touchdown Jesus hasn’t seen a national championship since 1988. LSU has won three since 2003 all with different coaches. The Tigers are like a Star Wars movie. It almost doesn’t matter who the leading actor is. The product is going to be successful. Nick Saban, Les Miles, and Orgeron all reached the pinnacle.

This is in no way meant to disparage Kelly. He’s the best CEO the program has had since Saban. His .728 Division I winning percentage is among the highest of active coaches. He helped build the success that Cincinnati enjoys today. The same with Notre Dame. He should be able to deliver at LSU.

Kelly’s biggest strength is that he knows how to put a staff together. Two of his former assistants are NFL head coaches: Matt LaFleur (Green Bay Packers) and Robert Saleh (New York Jets). His defensive coordinator at Notre Dame, Marcus Freeman, was promoted to succeed him in South Bend.

Kelly’s staff at LSU will include offensive coordinator Mike Denbrock and defensive coordinator Matt House. Denbrock has worked with Kelly before at Notre Dame and was the OC for the greatest Cincinnati team we’ve ever seen, as the Bearcats went 13-1 and reached the playoffs last season. House was the linebackers coach for the Kansas City Chiefs who won the Super Bowl in 2019.

The assistants should have no trouble recruiting. LSU will get players, no matter the coach. Always has. Always will. And often you don’t have to travel far. According to The Clarion-Ledger, Louisiana is fourth-best when it comes to states producing NFL players per capita. Orgeron’s 2019 national championship team featured Louisiana natives and future first-round picks Ja’Marr Chase, Justin Jefferson, Clyde Edwards-Helaire, Patrick Queen, and Derek Stingley Jr.

What are reasonable first-year expectations for Kelly? The Tigers should be better after going 6-7 last season, but it will still be a rebuilding year. On paper, they look like the fourth-best team in the SEC West behind Alabama, Texas A&M, and Arkansas. The offense should be better with a healthy Kayshon Boutte (ankle) at wide receiver and an academically-eligible John Emery at running back.

It will be interesting to see how Year 1 of the Brian Kelly Experience goes in Baton Rouge. The first four games are winnable (Florida State, Southern, Mississippi State, New Mexico) and in-state. The tail end of the schedule is difficult, including at home against Alabama and trips to Arkansas and Texas A&M.

Kelly is used to the pressure after being at a football-first school in Notre Dame. However, it’s a little different in the SEC. Just ask the last LSU coach.

“I don’t know that it’s fair, but (national title) is the expectation. Great players, great support. You should be able to win a national championship in 3 years,”

We’ll see how this move works out for Kelly and LSU.