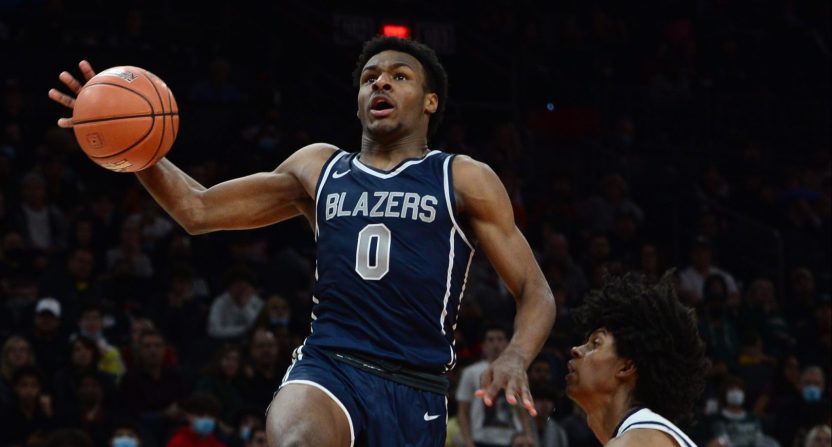 It was always assumed that LeBron James would have attended Ohio State had he played college basketball. Even though he didn’t, perhaps his son, Bronny James, will go in his place.

According to On3’s Joe Tipton, Bronny is eyeing a visit to Ohio State, presumably for the season-opening football game against Notre Dame on September 3.

As far as anyone is aware, this would be Bronny’s first college campus visit as a recruit. Tipton notes that the plans aren’t finalized, however, and it’s unclear if this will be an official or unofficial visit. Tipton also says that it has been “suggested that LeBron himself is also hoping to attend the Buckeyes’ season-opener.”

Bronny, currently the No. 38 ranked high school player in the 2023 recruiting class, according to On3, has not received an offer from the Buckeyes yet, though he does have offers from USC and Memphis while Oregon and UCLA have been installed as early betting favorites to land the four-star player.

Those odds had Ohio State as a +1400 long shot to land Bronny when they were released last week, and that might change with this week’s report.

There’s still a long way to go in Bronnt’s recruitment. Still, even if Ohio State isn’t able to land LeBron’s son, there’s always another one they could consider offering instead.