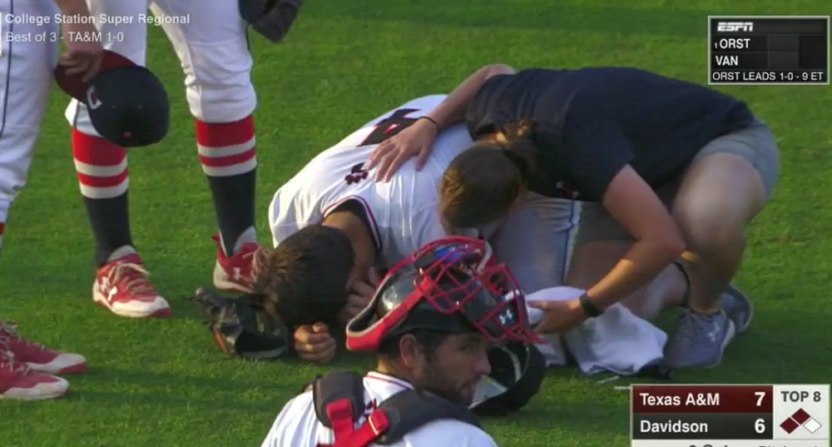 The Davidson Wildcats’ baseball team was a great story heading into this weekend’s NCAA super regionals, as they’d never even previously made the 64-team NCAA tournament  in their 115-year history, but knocked off No. 2 national seed North Carolina and others in the opening round to advance to the 16-team super regionals. They then made some more history there, falling 7-6 to Texas A&M in 15 innings in Friday’s opening game of the best-of-three series, the longest opening game in super regionals history. However, that game had its pitfalls, such as a Davidson pitcher throwing eight straight balls while taunted by Aggies’ fans, and the eighth inning in Saturday’s game went even worse for the Wildcats, all but ending their hopes of reaching the College World Series. They took a commanding 6-2 lead into the top of the eighth, but promptly gave up seven runs there, including the go-ahead two (which would be decisive in A&M’s eventual 12-6 victory) on one of the most brutal and embarrassing infield collisions you’ll ever see:

With the bases loaded, two out (meaning the infield fly rule wasn’t in effect), and the Wildcats’ lead reduced to 6-5 following some errors, A&M pinch hitter Jorge Gutierrez popped what looked like an easy ball up behind the pitcher’s mound, but second baseman Alec Acosta and third baseman Eric Jones both came charging for it. The two collided heavily, with Acosta smashing into Jones’ arm and falling down. Acosta still managed to catch the ball, but it then dropped out of his glove, meaning that the third out wasn’t recorded and that the two runs the Aggies scored counted. Here’s a look at the aftermath:

And here’s the replay:

Acosta was taken out of the game afterwards. A&M would score two further runs before the inning ended, extending their lead to 9-6. They’d add another three in the top of the ninth on a Walker Pennington home run, giving them a 12-6 lead that they wouldn’t relinquish. And their comeback wasn’t all about this play, as there were other mistakes too. But this one was particularly brutal, both in terms of the collision and in terms of its results, which helped seal the Aggies’ comeback and ensure Davidson’s Cinderella story would come to an end short of the College World Series. And it could all have been avoided with a little better communication.