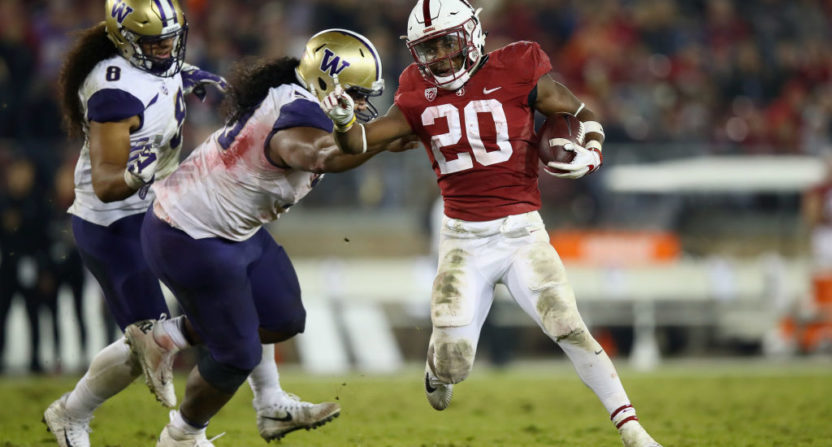 Late Friday night, Stanford running back Bryce Love put together one of the best games of his season. He may have had better performances in the box score this season, but rushing for 166 yards and three touchdowns against No. 9 Washington was far more impressive than any other game Love has had this season. In doing so, Love helps to keep Stanford’s Pac-12 championship hopes alive, and that in itself creates quite the problem for the Pac-12 as far as the College Football playoff is concerned.

In short, the Pac-12 is cooked. There is no coming back from this even under the craziest of chaos scenarios that you can imagine at this point.

Washington was the last great hope the Pac-12 had of landing a team in the competitive four-team playoff field this season. After getting in last year as the No. 4 seed as a one-loss Pac-12 champion, it was pretty clear there was a small margin of error down the stretch this season, already with one bad loss on their resume. As the last one-loss team standing in the Pac-12, it was up to Washington to come up with a strong finish to the season with a win at Stanford against the top Heisman contender in the conference (no disrespect to Khalil Tate of Arizona), and against a decent Utah team and a ranked Washington State, before potentially faciung a ranked USC in the Pac-12 championship game. Running the gauntlet without a scratch would have made for a solid case for strong consideration to be included in the College Football Playoff this season, for a second-straight year.

At 8-2, Washington needs a whole lot of things to go their way to even think about making a return trip to the College Football Playoff, and even that might not be enough. In the three years of the College Football Playoff, no two-loss team has reached the four-team playoff, even with a conference championship. More importantly, Washington may not even get the Pac-12 championship opportunity, because now Stanford is back atop the Pac-12 North at 6-2. Washington State actually owns the head-to-head tiebreaker over the Cardinal, but the Cougars will still have to avoid another loss in conference play in order to have that swing in their favor. Bottom line here is it does not look good for Chris Petersen and his Huskies this season.

But what about USC?

As mentioned above, no two-loss conference champion has managed to crack the College Football Playoff yet, so the odds are not all that great for the Trojans. But could USC benefit from a second-half surge since getting blown out on the road by Notre Dame for their second loss of the season? At No. 11, it is still worth exploring for a brief moment, with the understanding that there are a lot of teams to catch up to down the stretch. But with two winnable games remaining in the regular season and a potential top 25 showdown in the Pac-12 championship game remaining, could the Trojans rise seven spots to get in at the very end?

That is what makes this weekend so important around college football. There are three top 10 teams guaranteed to lose today with three games between top 10 teams on the schedule. It is possible that USC could be creeping up this week if they can win at Colorado. Georgia or Auburn is losing. TCU or Oklahoma will lose. Notre Dame or Miami is going down. The flip side of that is three teams in the top 10 are guaranteed to win, and in doing so pick up a good solid win to show off to the selection committee. USC’s best win is against Stanford back in Week 2. And if there is a rematch with the Cardinal, we have the possibility of a three-loss Pac-12 champion.

Or a four-loss Pac-12 champion if Stanford loses to Notre Dame.

The door is essentially shut on the Pac-12, but the door is not locked just yet. There is a slight glimmer of hope, but the Pac-12 is in a slightly more difficult situation for the playoff than the Big Ten is at this point.