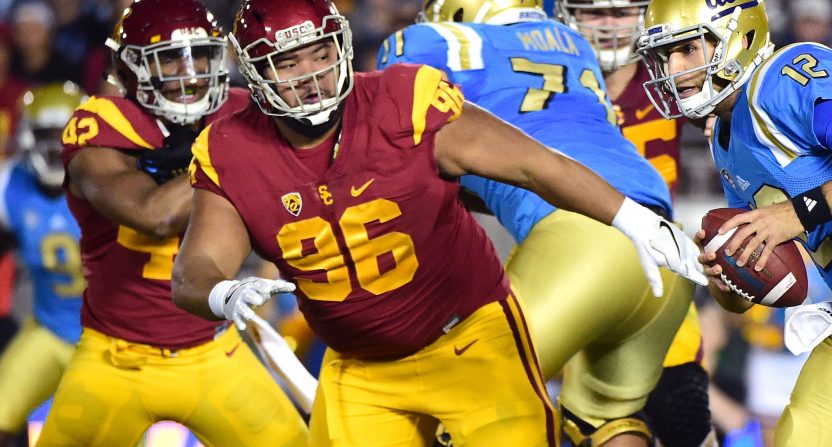 The NCAA is essentially a corporate behemoth masquerading as a non-profit organization. It has a myriad of byzantine rules and regulations, many of which are seemingly backwards to the point of ridiculousness.

The story of former USC defensive lineman Stevie Tu’ikolovatu is a prime example. Tu’ikolovatu was recently selected by the Tampa Bay Buccaneers in the seventh round of the NFL Draft, and he started his collegiate career at Utah. But after he transferred to USC, Tu’ikolovatu decided to move to Los Angeles to begin working out immediately.

He wound up sleeping in his car. For two months. His idea. Eventually, his parents delivered his mom’s 2004 brown Chevy Suburban to Los Angeles. They didn’t know their son would use it as an apartment. That story only came out after Tu’ikolovatu began playing for USC. He won the school’s defensive player of the year award in 2016 and was named defensive MVP of the Rose Bowl after making eight tackles.

Back to the car …

“I wasn’t a hundred percent comfortable in there,” Tu’ikolovatu said. “Kind of squeezed. But I took the back chairs out and was able to fit in there a little better.”

It actually gets crazier from there, as Stevie’s wife joined him:

There was no “apart” in the Suburban. They piled blankets and pillows in the back of the SUV. They hung shower curtains inside to block the sun. They bought two small fans. They had an ice cooler and a garment bag for laundry. Home, sweet home.

The happy couple frequented the beaches and beach parking lots. Steve’s favorite was Manhattan Beach, because of the boardwalk and the grass hill he worked out on in the mornings. Kalo liked Imperial Beach. There were fire pits. They would shower at night at beach facilities. In the morning, Kalo dropped Steve off at USC and looked for work. Then came dinner.

It’s important to note that this wasn’t exactly forced homelessness, in this case. The Tu’ikolovatu’s acknowledged there were people with whom they could have stayed, but this was their choice.

However, it stands to reason that there are athletes who don’t have that choice, and that the rule could force them into absurd situations like this. This sheds light on yet another example of how the NCAA seems to be designed to make life harder for college athletes, the people for whom the organization should be advocating, not subjugating.