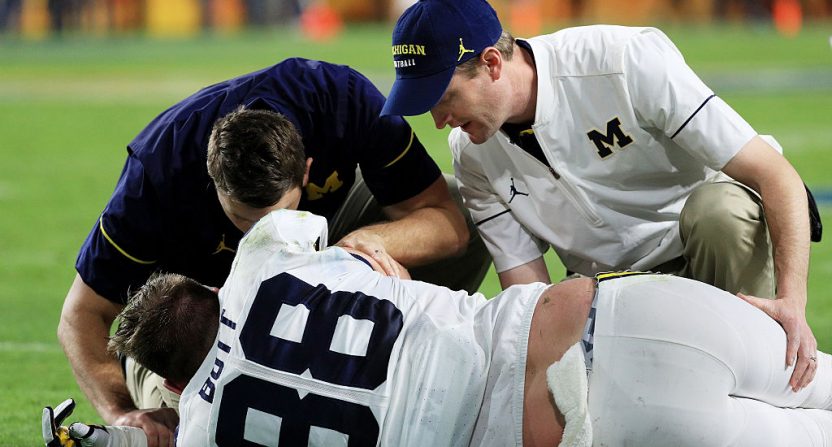 During the 2016 Orange Bowl on December 30th, University of Michigan tight end Jake Butt tore his ACL. The devastating injury forced him into a lengthy recovery process for the second time in his life.

It is also a reason that helped Butt slide all the way from a potential second round pick to the Denver Broncos in the fifth round of the 2017 NFL Draft.

Meanwhile, Leonard Fournette and Christian McCaffrey decided to make a statement and skip their final college bowl games to avoid a potential injury. The result? They were drafted fourth and eighth overall, respectively. That’s a little bit higher than 145th overall in Butt’s case.

As The MMQB points out, the three form the perfect case study of whether or not players will skip bowl games in the future.

“I don’t think my opinion’s changed,” Bengals OT and NFLPA president Eric Winston told Albert Breer Saturday, after Butt was selected. “The thing that’s changed is that another false narrative has been proven false once and for all. The whole idea that, ‘Man, if you sit out your bowl game, then they’re gonna think less of you and you won’t get drafted as high,’ has obviously been proven false again. We all knew it was false.

“If you’re a top-20 pick, where’s the value in playing?” says another. “One, there’s the risk of injury, which is the biggest component. If you suffer a serious injury, it could hurt you a little, or hurt you tremendously … Second, what do you have left to prove? That’s a big piece. Fournette, McCaffrey, I wouldn’t be sure there was anything else they could do. Maybe elevate yourself a little? Put that vs. the risk.”

As Winston points out, the narrative of falling because you may not have the “heart” to play or that you won’t get drafted as high because teams think less of you is false. If the Jaguars were discouraged to pick McCaffrey because he didn’t play in Stanford’s bowl game, that didn’t seemed to matter when they picked Fournette, who also didn’t play in LSU’s bowl game.

If Fournette had played in the Citrus Bowl this past season, but McCaffrey hadn’t played, the narrative would still be false because Fournette was drafted before McCaffrey. At the same time, if McCaffrey had played in the Sun Bowl and Fournette didn’t play in the Citrus Bowl, but Fournette was still drafted higher, the narrative would still be false. This is all assuming neither team that drafted the two running backs said they did or didn’t draft a player because they played in a bowl game.

In short, the only way to really tell if teams are discouraged by someone who chooses to not play in a bowl game is if they come out and directly say it. But until that happens, there really is no reason to believe teams think less enough of prospects who don’t play in bowl games to not draft them entirely.

That brings us back to Jake Butt.

If the tight end hadn’t played in the Orange Bowl and therefore didn’t tear his ACL, he may have been drafted higher, but once again, we won’t know that unless a team comes out and says so. So that begs the question: how could we ever know if teams change their opinion of a player based on what happens in a bowl game unless they explicitly state their opinion?

The answer is simple: we won’t.

“Whatever it might be, there’s not a right and wrong answer,” Winston says. “It’s a business decision that needs to be made, and shouldn’t be made because, ‘Oh, they paid for my school.’ It’s gotta be made because it’s the right business decision for you going forward. And let’s face it, there’s another side to this. The schools could be giving out insurance policies to all these guys much bigger than they are right now.”

That’s an interesting point brought up by Winston. Could schools encourage players who are thinking about skipping bowl games by offering them insurance packages?

“Any guy that’s draft eligible, especially first, second, third round, why would you ever play a bowl game without your school buying you a couple million dollars of insurance on loss of value?”

Since Butt chose to play and didn’t have the insurance, let’s take Fournette instead as a case study for the insurance. The LSU running back was drafted fourth overall by the Jacksonville Jaguars and had been talked about as a top 10 talent for the past couple years.

When Fournette said he wouldn’t play in the Citrus Bowl, could he have been enticed to play by LSU if they offered to cover draft insurance for him? The answer is yes he may have played, but then the question becomes how much does LSU guarantee him in insurance?

In the end, the insurance situation brought up by Winston leads into a rabbit hole of potential scenarios regarding different levels of injuries.

As a result, the better thing to look at as a whole is regardless of insurance, should potential first and second round picks just skip the insurance question and not play in bowls at all?

It’s one thing to skip out on a College Football Playoff bowl game and in that case, I would imagine players would play for the shot at winning a title. But as Fournette and McCaffrey pointed out in their situations, they weren’t playing for anything but a Citrus and Sun Bowl win, so what’s the point?

Is the “glory” of hoisting a trophy for a meaningless bowl game worth the potential injury? Probably not because of how highly the two were valued. The two were really the first two well-regarded prospects to do this, and have probably launched a new trend.

Next season, if Louisville fails to make the CFP and instead finds itself in (for example) the Belk Bowl, will Lamar Jackson play? It’s not guaranteed due to what happened with Fournette, Butt, and McCaffrey. If Jackson has a stellar season, but doesn’t make it to a marquee bowl game, he very well may choose to skip that bowl game in favor of a larger payday

The whole concept of whether more players will skip bowl games can’t really be discussed until more players do so because of what happened in this year’s draft. After all, two isn’t really a trend, especially when it seems like their draft stock wasn’t impact negatively or positively because of their choice to forego their bowl games.