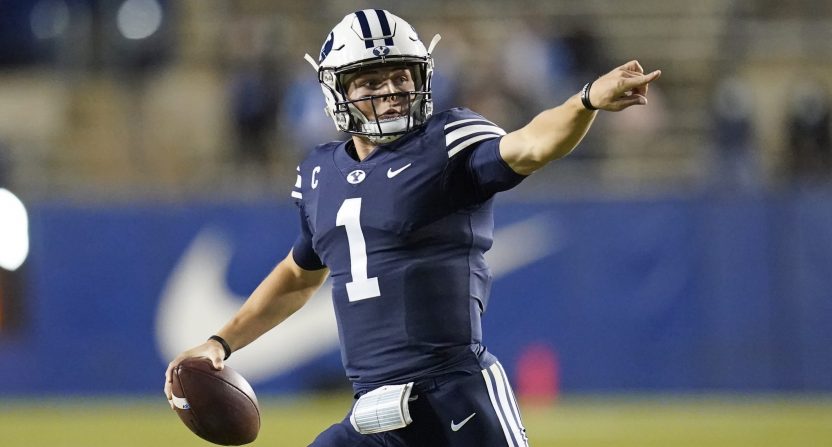 The first College Football Playoff rankings of 2020 were revealed Tuesday night on ESPN, and while the order can be debated, there weren’t any notable surprises at the top. Alabama is ranked No. 1, followed by Notre Dame at No. 2, Clemson at No. 3, and Ohio State at No. 4. Texas A&M (No. 5) and Florida (No. 6) are just outside the current four CFP representatives.

The big surprise of the night came with the team ranked No. 14: the BYU Cougars.

BYU is 9-0, and is No. 8 in the AP poll. They annihilated Boise State 51-17 in Boise (granted, against the Broncos’ third-string quarterback). They’ve outscored opponents 428-125 (that’s a +303 point differential). Quarterback Zach Wilson is a potential top-five pick in the NFL Draft after seeing his stock skyrocket with a season that has produced 26 passing touchdowns (compared to just two interceptions) and eight rushing touchdowns.

This is a legitimately very good team that most evaluators thought would be ranked in the top 10. At No. 14, their CFP chances would depend on a miracle (basically losses from nine teams ranked ahead of them). And this comes after a potential matchup — and résumé changer — with Washington fell through on Monday. There were reports BYU was “ducking” Washington, but Cougars head coach Kalani Sitake said that’s “a false narrative.”

"We're not afraid of anybody." pic.twitter.com/mkAu1XLKjL

BYU may feel much more motivated to try to schedule a game vs a highly regarded program after these CFP rankings. Cincinnati — No. 7 in the CFP rankings — has been a suggested potential opponent in the coming weeks.

And *this* is why Cincinnati and BYU should play each other. Cincy needs quality wins to move up from 7 to 4. And BYU *really* needs one to move high enough to reach the NY6.@ChrisVannini and I discussed.https://t.co/HlwlufpMY3

Whatever the case, BYU’s ranking drew a lot of reaction- and mostly criticism. Here’s a sampling of the reaction on Twitter:

I’m fine with where Cincinnati is. BYU is getting scorched for the strength of schedule. Really not sure what else BYU is supposed to do. You can’t really say “PLAY SOMEBODY, ANYBODY” when all of those bodies are pretty much locked out from non-conference games this year.

the BYU disrespect is insane

Yes… the SOS is awful… but clearly the #CFBPlayoff didn’t watch a minute of BYU football this season.

BYU in the mid-teens is a joke ranking. Just say you go to bed before they kick and haven’t watched them play and be done with it

BYU at 14 is as ridiculous as anything the committee has ever spit out. Watch the damn games. https://t.co/qAS47rVPbs

I understand BYU's schedule is dreadful, but two-loss Georgia's wins came against opponents that are a combined 15-22. Auburn only team w/ winning record they beat.

David Pollack: "My gosh, BYU (at) No. 14? That is absolutely nuts to me, just watching how dominant they are, not just analytically, but physically, when you turn on the tape."

Anybody who just blurts out "their schedule" for why BYU is ranked No. 14 has clearly not watched BYU. I like their odds against at least half the teams above them

BYU calling Cincy on the phone: It's just so unfair how the Playoff Committee discriminates against us non-power teams.
Cincy: pic.twitter.com/9TxyKNdBtV