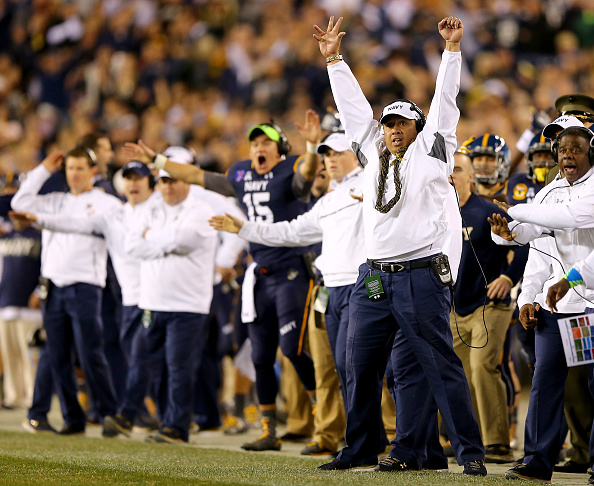 Navy just got done beating arch-rival Army for what seems like the millionth time in a row on Saturday (okay, its really only the 14th time in a row), but there was a bigger story afoot — the future of Navy head coach Ken Niumatalolo.

Would he stay, or would he bolt for a chance at a fresh start somewhere else, somewhere where the competition is bigger and the standards still high?

It was curious to see him so emotional, tears rolling as the Army alma mater played and his Navy Midshipmen sung their hearts out after another victory. Some of those emotions may have been because of the special group, including record-setting quarterback Keenan Reynolds, but it almost seemed like it was a goodbye.

Does this seem like someone whose heart is 100 percent in it to stay?

“It has nothing to do with the Naval Academy or (Navy athletic director) Chet Gladchuk. These players have been phenomenal. I’ve come to work for 18 years loving my job — I love to come to work. I’ve been here for 18 years, and it’s been my life. My kids have grown up here, and I’ve given everything for this program.”

Following the game, Niumatalolo, who is a devout Morman, was on a plane out west to visit with the administration of BYU.

It would be an interesting move, given Niumatalolo’s eight-year tenure at Navy and his dedication to the service academy for the past 18 years overall. However, BYU can offer a lot of what the service academies do in terms of standards, but much more in the way of football prowess.

BYU carries with it a special place in the history and world of college football today. Currently an independent, BYU may be poised to take on a different challenge in the coming years as the rumors of Big 12 interest and need continue to swirl around one of the few remaining independent schools in college football.

There’s also a familial tie to the situation, as his son Va’a is a sophomore linebacker on the Cougars.

A chance at coaching your son, doing so at a place with high values, and doing it at a place where your own religion is not only valued, but taught?

How could a coach like Niumatalolo not take at least a long and hard look at replacing the departed Bronco Mendenhall?

Ultimately, all of those factors have to be set aside though and the biggest question answered — is going to BYU a good move for Niumatalolo’s career?

He’s clearly built something great at Navy, as the Midshipmen are a consistently ranked team and now play in what one could argue is the toughest “Group of 5” conference — the American Athletic Conference.

There’s opportunity to play in big games and earn national respect, all while still doing it with honor and morals like he’s always done. Oh, and there’s also the added bonus of tapping further in to the Samoan pipeline already available at BYU, meaning that he can honor his heritage in a way not available at the Naval Academy.

After 18 years at Navy though, perhaps a move west to lead a program with so much similar and honorable tradition would be the right move at the right time.

Niumatalolo wouldn’t be leaving Navy high and dry either. Instead, he’d be leaving on the highest of highs for the program in modern college football.

Timing, family, religion and football — it all points to Niumatalolo’s time to make a move as now.

Will it happen? That is something only the Navy head coach could know.